Malizia in malebolge and I, the mendicant witness. Wherein the eighth circle is drawn beneath the veil of dark mists, wherein Khaos and Erebos stain their kinship’s ink across the sky in all directions. A bell rings twice before mind-wrenching crunch shakes loose all anxious release, this epileptic shock serves the auld heroic mind freshly reborn from death and wearing one of a thousand-faced mythos. Dragon-winged, asp bodied, and duḥkha-aligned — Tasting blood’s iron (while biting the tongue apart) now flows away any fettering poisonous bitterness. All suffering ends with reconstitution in quieted and stoic observance, here we replace the panicked inner-animal with a greater resolve capably increasing with every ritual. Eight visions in moon upon mirror’d waters, choking and coughing out the smoke of conjuration, to allow the breath of vitality unknown behind the eyes of the soon enlightened. Consider this window unto perceptible N.O.X. and all peering curiosity a symptom of needed change, of  accepting one’s nature to know another path beyond given choices. Though it cannot promise freedom nor suggest madness is anything but a wickedly desirous side-effect, the eighth μονοπάτι from Greek occult black metal band Acherontas offers the eye of the storm, a clear and crystalline mosaic of order by way of the black arts. Spirited and rejuvenated as one might be by psychedelic entrancement and the enlightened mind resultant, a set of songs such as these demands fealty to all manner of magick to sate the curious void and to fill the listener with new meaning. Nothing less than greater capability will come to those who’d divine meaning from ‘Psychic Death: The Shattering of Perceptions’.

If you’ve no interest in the spiritual history of mankind’s mental rejuvenation through shattered self-perception, most of which simple-minded monotheism (and the mind-erasing societal constructs resultant) would hope to crush away, and still manage to avoid its massive implications by way of ‘eastern’ religion, Jungian psychology, and today’s therapeutic-affixed popular drug applications… I’d figure you’d likewise have little interest in reading about a solid black metal album, either. To have been touched, transformed, or merely entertained by the long history of V. Priest‘s work within the ever-evolving pan-spiritual (though markedly Drakonian) black metal project Acherontas is undoubtedly an ‘underground’ affliction; Direct contact and any discerned meaning comes from careful attention, atmospheric indulgence, and may sometimes involve research or some devotion to understanding beyond the instant sensation one might achieve within minutes of firing up a record from the simpler, easier days of early 90’s Greek black metal.

That isn’t to say the riffs haven’t been there for this project but that the Acherontas Coven has cycled in and out key members along the way, morphing the overall expression and sound of the band in subtle and not-so subtle ways that amount to complex and extended albums rife with spectacular detail. In my time spent scouring and perceiving ten years and seven albums worth of Acherontas‘ main discography for the review of ‘Faustian Ethos‘ (2018), the end of the Formulas of Reptilian Unification trilogy that’d started back in 2015, I’d witnessed a mind enraptured and deeply immersed in spiritual intention, a willing absorbance of all manner of wisdom and darkness, as well as a compulsion to grasp at every shadow and yank meaning into the knowledge-driven spirit’s void. So, does this eighth album beyond great personal achievement hammer the ‘reset’ button or collect all defining traits toward greater singular identity? The former was inevitable, perhaps even prophesied, the latter entirely natural in occurrence.

Decades-spanning inclusion, borderless evolution, nostalgia or simply a different paradigm explored between theme and amplified strengths found upon ‘Faustian Ethos’, the objective status of ‘Psychic Death: The Shattering of Perceptions’ comes with improved render than any prior by way of Pentagram Studio via George Emmanuel (Lucifer’s Child). There is the notion that this particular recording was more potently written and more prone to explore the strengths of newer members introduced nearby the previous record. The two most intriguing suggestions of classic 90’s Greek black metal and perfunctory 70’s heavy rock influences make the most sense here, where the rhythm section is particularly on board for songs in the style of “Kiss the Blood” where subtle movements backing the experience practically dance beneath the guitar work, emphasizing their role with pace changes and spiraling collapses beneath verses. The ‘old school’ black metal influences are often just as subtle but the heroics are most evident in the heat of “Coiled Splendour” where melodic rhythms eventually become the core statement and spectacle of the song.

Throwbacks and occult black metal apropos ‘polished’ production values are well and good in the name of balancing progress with ancient power yet, some of the most exciting moments found on ‘Psychic Death: The Shattering of Perceptions’ actually arise from the use modern guitar techniques, such as those found on stunning opener “Paradigms of Nyx” and Sinmara-esque “The Brazen Experimentalist” — A melodic piece driven by fluid-yet-commanding guitar work, crafting itself into a gorgeously memorable highlight just as the blood strikes the heart of the full listen. Acherontas are not interested in giving a set of diluted career highlights to create a cumulative identity but, they’d rather push all manner of related fonts into one powerfully curated statement. If you, like me, found the lead guitar work to be the best part of ‘Faustian Ethos’ then I’d suggest the material on this follow-up is more consistently themed and prone to an inch more flair, such as the dual leads that elevate the title track. In fact the title track tended to be the piece that’d keep the full listen from ever falling into the background thanks to its intricate high-necked guitar parts, repetitive circular licks that implicate the ‘Triarchy of the Lost Lovers’ feeling main riff once it lands. This is the sort of high-drama spiritual event that has long characterized Acherontas‘ oeuvre yet it feels special for the level of evident craft gone into the piece. It quickly becomes an unforgettable signifier for the mid-point in the full listen and a grand highlight on an appreciably diverse tracklist.

Maturity achieved through years of refinement, potency distilled from countless sources of devotional wisdom, and diversity gleaned from all manner of influences — Each of these three pillars features as three portals, greater tenets of the new-but-old soul’d ‘self’ achieved by Acherontas on this eighth ritual unto a higher plane of identity and expression. Not only does the music hold in its veins a higher achievement than before but I have to hand it to the band for the selection/commission of cover artwork from Chris Undirheimar, an eye-pleasing composition with strong occult symbolism appropriate for a record such as this. It is the sort of thing I am compelled to consume even before considering it; That wild fan instinct is rarely stoked on my end these days and must be acknowledged. Spin after spin and long past the numbing sensation that manifests after listening to a spiritual black metal record for hours on end, ‘Psychic Death: The Shattering of Perceptions’ reveals it is the sum and continuation of known strengths of Acherontas throughout their long existence — Never drowning in nostalgia or attempting to reheat the leftover remnants of the past. Instead we are granted the best of their collective efforts, spiritual notions, and obsidian black metal ideals honed abreast a theme that is at once easily grasped and cryptic enough to want to chip away at. It is one of the finer records from these notable Greek musicians, threatening to usurp my personal favoritism for ‘Amenti – ​​Ψαλμοί αίματος και αστρικά οράματα’ (2013) and ‘Theosis’ (2010) already. A very high recommendation. 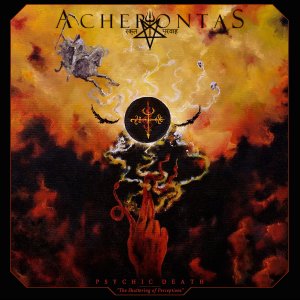