Would endless punishment be for the good of any being? Or, if one’s predetermined daimonian grip is suggested to be ’til death then, what is left to fear in any supposed afterlife? There can be no ‘benevolent’ punishment left for all manner of flawed terrestrial agent without reaching for crumbling, archaic and terribly politicized views perpetuated by now distant and dried up Christian societies. Time greets more and more generations of zealots with their yearly inheritance of dust, suffering and supernatural dreams today — A skeleton’s worth of dried marrow awaits those willing to resort to violence that’d sustain their belief by way of imagined enemy; Even still, the blood of Christ sustains little more than a twitching fever of withdrawal anymore. Entering faith to cheat death, rescinding to lone naturalism to cheat corrupt societal rule, and returning to scornful community with daimonian hand upon nape begets a lived-in wisdom for the inevitably re-circling fraternity of Swedish black metal leadership Armagedda who, in their seventeenth year out in the cold finally step into new cabin, to feel the old fires again. ‘Svindeldjup Ättestup’ amounts to a cheated death, proof that a lifetime away has not snuffed out their true path, no matter how self-destructive it’d been in their inspired youth.

Initially active as Volkermord circa 1999 before changing their name to Armagedda soon after, the main duo of Graav (LIK, Ehlder) and A. Petterson (Stilla, De Arma, Nordvis Produktion) would serve as an inspiring wave of activity from the far north who’d impose great influence upon the restlessly ‘old-minded’ underground black metal hordes in Sweden at the time. Their upswing from savagely raw classicism spanning a few choppy demos and two notable full-lengths (‘The Final War Approaching‘, 2001 and ‘Only True Believers‘, 2003) bore no growth beyond fiery inspiration, a path of suicidal devotion and impressive Satanic sermon delivered with great sneering sincerity. The great work and dark path before them was surely the third album (‘Ond Spiritism‘, 2004) where Armagedda were granted clairvoyant insight that was either beyond their years or too-serious a blast of death worship to contain. The verdict has always been mixed on ‘Ond Spiritism’ as some consider it a modern classic, others see it as a minor regional classic, and if you were 20ish year old me back in 2004 you might’ve avoided it entirely for the ‘norsecore’ tag given by the (admittedly somewhat lazy in hindsight) curators of the era. Today I tend to lean towards the minor classic when considering the general quality of black metal back in the day versus the spirited songwriting of Armagedda during a time when the orthodox black metal rebellion was in full swinging glory. Why did the duo shatter apart? I’ve long felt that “Why?” was the wrong question as the results were admittedly just as fantastic and the lives they’ve lived since make for stunning reading, and listening.

There hasn’t been any great indication of unfinished business beyond ‘Ond Spiritism’, at least none expressed by vocalist/guitarist Graav in the last fifteen or so years, it’d appeared he’d moved on artistically between LIK and folk project Lönndom in some capacity although interviews relevant to Ehlder paint a picture of being born again, divorce, of retreat to nature and even living as a fugitive on the lam before a period of incarceration. The personal details included are only relevant for the sake of understanding the daimonian grip I’d inferred earlier, that the wilting hand on shoulder at all times ultimately drives spiritually endarkened men to know themselves or, to self-destruct. Petterson details the time in between under different circumstances and perhaps under less wild duress steady with his label and more recently putting in the work with impressive atmospheric black metal band Stilla this past decade. Why reanimate the oldest, darkest leviathan after nearly two decades? ‘Svindeldjup Ättestup’ is less the pure, unconscionable death worship of the past and more a conjuration that comes with some personal danger and harmful intent.

It is death’s conjure back to life that should cause great fear, not for the spread of whatever dark magick one could imagine but for what will be seen when staring into the eyes of long dead and decayed forms. Ironically enough, or perhaps appropriately placed in every way, ‘Ond Spiritism’ was ahead of its time for its meandering jolts of freedom beyond orthodoxy as well as its gloriously writ prose so, to return almost directly to the point that Armagedda left off with great purpose creates a great ripple within the mind… A sensation that nothing has changed, that what few things have changed have little meaning, and that the assuredly changed men creating this music push forth a new record with such ease and professional ebb that it is nauseating and impressive at once. In fact it is the finest and most connected to the original heart of a “first” black metal project I’ve witnessed in some time, where Armagedda‘s corpse may shamble differently but the old odes and disgust for the pious reverberate with incredible familiarity and some enhanced black metal empowerment that comes with personal identity better secured at mid-life. I can hear the goblin-spitting already, “A more -mature- Armagedda?” and sure, I’m all for it after spinning the album countless times. ‘Svindeldjup Ättestup’ is honorably paired with ‘Ond Spiritism’ while sourcing each musician’s internalized progress these last several decades. They’ve even worked with the same cover artist (E. Danielsson of Watain) incorporating the old art in a clever way, in case the musical connection between the two albums wasn’t obvious enough.

Isn’t beginning the album with a song titled “Ond Spiritism” enough to make the connection? I could go on about similarities and smaller ‘callback’ nuances but the auld is nowhere near as interesting as the new as Armagedda have managed to double the spiritual entrancement of past works, relying upon decades honed skill rather than brute force in achieving the voice of possession in defiance. The sheer amount of gracefully speared and slashed detail within the guitar compositions throughout ‘Svindeldjup Ättestup’ itself demands countless analytical listens, for impact and for well-woven technique that expresses classic Swedish black metal forms in revolt, an attack that is cognizant of new forms as often as it feels like an electrically charged peer back at Swedish black metal circa 2004. Everything from Grá to Ved Buens Ende could be sourced for comparisons yet each song is a different world unto itself. The hallucinatory trance of it all kicks in beyond the initial high of “Ond Spiritism” with “Likvaka” a seven minute ode to stay dead bearing a nigh psychedelic atmospheric lilt as it peaks. This is the right time to be sold by ‘Svindeldjup Ättestup’ as the blend of traditional and non-traditional, of melody and violence hasn’t yet given a breath to the listener. Each song kicks right into the next for a spectacular Side A, though it may be mid-paced this is a most thoughtful and outrageous Armagedda with twenty years worth of morbidity to upheave. I’ll feel like a shill going track-by-track but I cannot move forward without emphasizing the swinging, fly-spraying, putrid tarantella of “Djupens Djup” with its two shambling vocal layers and nigh Tulus-esque beat during certain verses.

Production from No Solace, specifically M.Z. of Mgła is precise and clean, ringing but without any cheaply placed reverb. The render is that of wooden floored thumps and walls that breathe enough for Graav to echo about without the drums taking over. Rhythm guitars are rarely fast paced but still manage menacing presence in the mix, even the sleepiest moments bear some manner of snarl which I’d first attribute to the guitar work but also the tonal capture, thankfully not becoming a plain storm of a thousand guitars as so many polished black metal albums persist with today. Session drums from M.S. aka The Fall (Over the Voids…) are of remarkable quality, an important keystone of the work is that drum sound and it serves a vital role during the best moments from songs like “Likvaka” and the easy-groove of “Flod av Smuts”. All of this is well and good, great even, but I’m prattling on forever with anticipation for the piece that’d held hostage my mind for weeks now, “Evigheten i En Obrytbar Cirkel” insists upon mind-rending possession that shakes me by the ears and with a tearing motion reminds me what a stinking animal I am as it plays. Much of this stems from its extended length and inspired textural guitar riffing, which keeps its mid-to-fast paced jog insistent and ranting for the full eleven minutes of the song. The trance is no less real by way of explanation, an elevation enhanced by choral chants and foot-tapping ride hits to the point that I’d get far too carried away with the moment created and hit repeat for 2-3 runs through the piece whilst forgetting to care about the rest of the album. A sentimental moment procured on my part at the very least and an indisputably captivating end to a fine album any way you’d see it.

I did not realize the curse’s grip was upon me until I’d been elbow deep in the abyss, searching for shards of dignity and purpose strewn about by the shocking dread incurred by this fine black metal album. No, it isn’t a rapacious guts-slinging howl at the moon nor does Armagedda give even the slightest nod to their earlier raw material, instead we are presented with the latest and best ideas from long-evolved and never sated artists pushing into the great beyond. Some desirous connection with the guitar work and entirely convincing performances featuring within ‘Svindeldjup Ättestup’ held my attention to the point of some small obsession. It is a fine work that could stand as pillar if needed but I’d like to see it as a chance for greater momentum, there is more stock in the abyss and this fresh blast of sneering obsidian attitude cannot be anyone’s finale. A high recommendation. 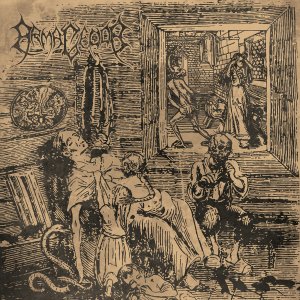