From the moment you’ve grasped it ‘Lizard Lounge’ begins to spit, shake, squeal, balloon up, and spray blood from every voidable hole – Any manner of defense mechanism will do as never-before-so-energized Scandinavian noise rock duo Barren Womb unleashes their third full-length trove of mechanisms for coping with the horror of being chewed within the unpredictable maw of a civilization unburdened by intelligence; A survival manual for those constantly under strain of the overbearing pursuit of damnation by way of the ruling class. If you are destined to be crushed under the wicked child-like thumb of widespread neo-conservative police state mental illness you might as well shake death off with some boogie-assed noise rock while you’re going down. It is the finest, most spirited, and ready for primetime release from the duo yet and they’ve not pulled a single punch whilst pushing it all out.

Sleepier, slinking, and a bit country when they formed back in 2011, Barren Womb have evolved considerable since first achieving their two piece Finn-Norwegian mind meld aimed towards a bit ‘o folk and Americana that’d gotten them notice enough early on to land tours, festivals and momentum enough to leave plenty of folks salivating for this latest record. The shift from post-rock edged post-hardcore rushes on their debut (‘The Sun’s Not Yellow, It’s Chicken‘, 2014) to hardcore n’ roll meets cowpunk swingin’ nearby Kvelertak‘s peak popularity on ‘Nique Everything‘ (2015) suggested that their gig would continue to maintain focus on backwater folk and classic rock touches; No doubt if you liked the first record (or two) from those Stavanger folks, you’re still going to be into Barren Womb today but they’ve always been wildly different bands twisting hardcore punk by way of different heavy rock influences. ‘Old Money/New Lows‘ (2018) marked a meaningful shift towards still moody but more starkly sociopolitical doomsday sayin’ hits in a more clear push for post-hardcore/noise rock style. ‘Lizard Lounge’ feels very much like a true follow-up to that record, indicating the road they’re headed down is where the breeze feels best. Good on ’em as the laid back grooves of their material eases up today, leaving behind the previously vital country punk edge of their oeuvre and the majority of their slow-swinging songs behind. Frankly speaking, good riddance to slow-poke rubbish.

The shift towards more direct, quick flashes of heavy noise rock and melodic (but still pretty hip) post-hardcore wasn’t complete in 2018 but it is here in 2020, a refinement focused on clarity and a much needed bump in the ass to push Barren Womb to their next level. ‘Lizard Lounge’ carries with it a load of singles front and back, catchy as they are cleverly packed into bitingly ironic bouts of prose, double-entendre and social commentary delivered with a subversive wink the majority of the time. By aiming their sights upon the absurd, brutalist and inhumane human contradictions we’re all still putting up with way too far into the short rope of our future Barren Womb push beyond parody of the toxic rural mind and line-up several more difficult shots at the usual suspects, zealots and incels and other agents of oppression. Beyond the amped and on the attack shout and wail of it all comes what I’d describe as NoMeansNo circa ‘Wrong’ from a cleaner, less bass guitar driven Scandinavian perspective, buttoned up but still wheeling out hard. The driving hardcore n’ roll downstroke of opener “Cemetery Slopestyle” giving way to two mercilessly catchy and increasingly syncopated pieces (“Karma as a Tour Manager”, “Hairy Palms”) pumps out a party worthy spectacle and makes an event of Side A, buzzing and barking towards a poignant moment as “Hairy Palms” fries up to a grease fire, “Inside / there’s a worm nearing final form / in time / they’ll burn us all just to feel warm” certainly an apt enough statement in hindsight as the world protests for change and far right sects seek to incite violence anywhere they can.

For my own taste I wouldn’t have given Barren Womb a second look had I not discovered ‘Lizard Lounge’ first; Their other records don’t have the same energy and biting wit or, at least it isn’t as clearly stated and slung hard prior to this one. The hooks are out in full force, too, such as early single “Smokes, Let’s Go” with its ‘Apocalypse Dudes’-worthy anthemic style ah via ‘Meir‘, “Be Kind, Have Fun and Try Not To Die” with its insistent heavy rock licks and stunning chorales of “Its not what you take away, but what you leave behind“, again provides some appropriately hopeful energy while clearly indicating apocalyptic horizons. Most of the record’s energy is up front, though, and it’ll be those first 3-4 tracks that’ll most likely inspire repeated listens thanks to a garage rock sized spirit and a banging modern noise rock sound accentuated by a burly rhythm guitar tone. Grating, spirited, kinda fucked up, too smart for their own good, and having fun with their doomsday post-hardcore messaging Barren Womb make for a fine noise rock band when they’re this focused and tightly wound. After far, far too many repeat listens and after having practically memorized ‘Lizard Lounge’, I can heartily suggest it is their finest record to date and worthy of a moderately high recommendation. 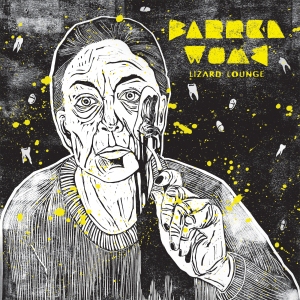