Imbolc past and spring alight, the three faces of Hekataion‘s distant antithesis and exalted goddess of subsistence and survival, the three-pronged inspiration of an undernourished Bríg is not enough for the undeserved tenant, man. Exalted smithy, a muse to all prose, and provider of wells brimming with healing waters there was unquestionable revelry within her benevolence in pre-Christian times. It’d been enough for folk tied to the land, those willing to respect it, yet the drought of consciousness amongst self-crowned usurpers and highest-achievers blighted all gifts from the goddess. Depth of choice for those seeking meaning, the gift of an adept hand for the craftsman, and health for the sake of all prosperity are auld and diminished skeletons behind glass for mutant man to gaze today, longing for a soothing word or warrior’s path toward freedom or, the perception of. Into damnation we will carry at least one treasured instinct unto grand spectacular unison, the keening cry of lament first uttered from Brigid‘s throat in mournful weeping song, only our wailing will be off key and with horror intensified by the fiery, storm-blasted slow death of all kin and cosmos — Just one journey of many shades and shapes taken in glorious astral luminescence, projected from the minds of Edinburgh, Scotland stoner/doom metal band King Witch on this their second full-length album ‘Body of Light’. A well of fable, legend, parable and personal experience to be drank unto and tripped into ’til drowned or enlightened.

Now that they’ve got two records and an EP under their belt we’ve gotten a better picture of what King Witch are and perhaps what they want to be. The more I crossed my eyes in contemplation and divined unholy reason from their discography the more invasive one central thought (or, observation) rang within, that these folk have gathered to make something bigger than they’ve heard and ended up making something gorgeously different than their peers without reaching too deeply into the void of absurdity. Despite rampant and persistent suggestion that King Witch are an epic doom metal band they’re not really -that- at all nor are they purely a stoner metal jam, or a plainly traditional mix of rock/heavy metal. Diving into the minutiae of metal and rock sub-genres and picking through classic underground metal references provides no real basis for what they’ve managed. Their ethos is uncomplicated and their modus is built upon Rush-like eruptive instrumentation that glorious floods the mind with bombast and vibrant expression. This just happens to whip into 90’s alt rock, stoner metal, doom rock, and classic heavy metal influences along the way. They’re a pub-sized band making inspired arena-huge music and their debut full-length (‘Under the Mountain‘, 2018) would forever land ’em on my personal radar, ranking high up there among my favorite releases of 2018 at #17. It’ll sound trite now but that album had lived up to the name of member’s earlier project Firebrand Super Rock as on-fire, high impact heavy music that’d skate the line between heavy metal melodrama and the finer rhythmic intricacies of stoner metal. Two years later they’ve managed this second record and the burning question is whether they’ve kept it up or kicked beyond their first step forward.

‘Body of Light’ is surely a steadying album where King Witch maintain their altitude while exploring the natural direction of their songwriting. Certain parts of the full listen explores some of that same Candlemass-esque territory in terms of phrasing, such as the crawling verses of “Call of the Hunter”, along the way but now more than ever the band leans towards the stoner metal side of things, leaning into the wah pedal and soaking up the classic crunch and wail of their Orange amp’d heavy rock buzz. I’d certainly referenced Rush with some backable reason yet Witch Mountain and Holy Grove are probably more reasonable comparisons now that King Witch reach for a more freed vocal patternation where vocalist Laura Donnelly is tied less to hooks than she is to the swing, groove, and attack of each song often pushing out lyrics without making pure spectacle of each piece. This was mildly disappointing upon first listen where I felt like they’d gone for atmosphere over engaging substance yet many of the songs would reveal their major hooks subtly, such as psychedelic doom-rocker “Return to Dust” where the rouse of the chorus is not the entire main event. Each song intends to traverse its own world, they are windows and experiences meant to be examined and soulfully felt when inspired. It took me about 4-5 listens to get there but, I did.

Though the difference is most obvious when each album is cranked to high Hell side by side, ‘Body of Light’ was recorded in a professional studio whereas I believe the first album was recorded in the band’s rehearsal/personal space. This makes a for a wholly different vibe when placing the performances within the “room” of the recording which is organic and crystal clear in its presence. Clarity is the biggest bout of change felt upon listening to ‘Body of Light’ as they move away from the blistering bass-heavy mix of ‘Under the Mountain’ with its gobs of reverb splattered psychedelia and vocal effects leaving absolutely no set distance between King Witch and the listener. As a result the album feels punchier, less obscure, and very simply achieved. It is more intimate as well as somewhat dry depending on the mood desired though the listening experience is arguably more powerful than before. Likewise there are more songs akin to “Approaching the End”, slower more atmospheric/psychedelic doom metal songs that allow Donnelly to express a bit more than the rumbling heavy metal wailers along the way (“Body of Light”, “Witches Mark”). The title track and to some degree “Call of the Hunter” are there to remind us that not only are King Witch still the same band but they’ve chosen a straight forward but strong path beyond their first record.

“Return to Dust” was the point where my brain was finally set afire with the realization that they’d done it again and “Solstice I – She Burns” was the point where I’d began to yearn for just a little bit more pronounced tonal variety. As much as I love the sound and style of this record a full hour of that guitar sound often left my mind leaning away from the wah pedal flourishes and wanting an alternate tuning, an odd experiment, or even a short flip over to another genre such as the bluesy campfire jam of “Ancients” on the previous album; No, “Solstice II” doesn’t count. The trade-off here is that this is a bigger album in every sense; It is longer, has more fabulously ornate riffs and inspiring vocal work. Either way I’d find myself leaving it on for 4-5 hours at a time, becoming annoyed, taking a break and going back in for more. Oddly enough I’d developed this need to return to the hour that King Witch have provided and keep banging away at it, not as work but figuring what the lyrics were on about and appreciating where guitarist Jamie Gilchrist‘s arrangements were coming from, this time there was the sense that he’d reached back to some 90’s rock (stoner and otherwise) for inspiration, helping to mutate their sound into something equally confrontational but also free-wheeling. Though I’d come into the experience having lauded ‘Under the Mountain’ I’d leave it lauding King Witch in general for the thoughtful and professional step up that ‘Body of Light’ provides in transit. It is a fantastic spectacle, a moving journey, and a heady bout of doom magick with just enough stoney sorcery to stand tall and away from the norm with some substantial earnest feeling. A high recommendation, and even higher for the stoner spheres of heavy rock/doom metal fandom who’re looking for a step beyond. 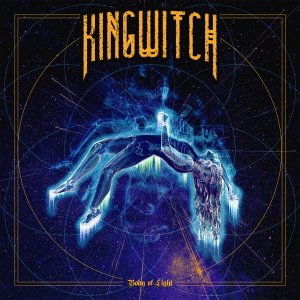