When death comes blasting, outrageously sentimental and with unconquerable disgust, you’ll know the stench of it long before the rotten sensation of the auld blood’s disease is creeping through your bowels up towards the heart. Thus it hangs in the air, dreadful and noxious is anxietous death’s presence, a calamitous fog of torpor and terror shocking the limbs into their own unique stupidity while the mind is driven insane, recollecting the past and howling a half-assed goodbye towards the infinite vacuum of oblivion. Faced with death and obsessed with the endless void, from the past comes a storm of clarity within one that’d create chaos for all, a wave of mortality suffered unto spire of spewing blood and mercilessly stricken-out slashing riff. Spread death’s infection through these riffs and they will become exponential in the hands of a well-practiced and devout slinger, as evidenced by Thuringian death-worshipers Sanctifying Ritual who’d strike back upon iron that will never rust, where extreme thrash blurred into new forms of 80’s death metal, death/thrash, and black metal. A dead but still heartily dreamed event now realized, this self-titled debut from the German quartet collects over a decade’s worth of devotion to extremes, purging their minds of rotten and splattering darkness in the process, and comes with remarkable and uncompromising ‘old school’ extreme metal authenticity.

There are many fitting analogues for the early progression of Sanctifying Ritual during pre-conceived stages through the end of their Mark I line-up where their sound was developed alongside member’s involvement in notable groups Alchemyst, Nocturnal Witch, and Division Speed. Their kin to chaos weren’t geographically distant back in the day (~2008) with Chapel of Disease, Beyond, and Excoriate all pushing their love for extreme thrash unto 80’s death metal thrusters. Most of those bands either pushed harder or reached their natural conclusion yet Sanctifying Ritual was in stasis for some years of silent death beyond their early run. Though I don’t have a copy of their first tape (‘Sadistic Death’, 2009) their second demo (‘Carved in Rotten Flesh‘, 2012) indicates any previous material might be primitive to the point of rot yet taking a deeper glance back to that 2012 tape you’ll undoubtedly recognize many of those formative songs have either survived on ‘Sanctifying Ritual’ or been spiritually morphed into new pieces over time. Sanctifying Ritual‘s first official release (‘Storm of Devastation‘, 2013) was also their last (not counting a limited compilation tape through Dying Victims) until this full-length surfaced and it’d be the last release with original vocalist Death. I’d venture a guess that they weren’t digging the direction of the EP’s songs and around this time both Nocturnal Witch and Division Speed became focused on their exceptional debuts in 2014 and 2015 respectively. ‘Sanctifying Ritual’ pulls back to the original spirit of the band: Garage-blasted, sometimes blackened and always thrashing ‘old school’ death metal a la ‘Morbid Visions’, ‘The Awakening’ and ‘Scream Bloody Gore’.

Despite the orthodoxy suggested on my part all comparisons offer only a glance of core inspiration and not the impressive ‘self’ that Sanctifying Ritual builds atop the old ways. Shades of Repugnant‘s (or, Verminous) thrashed out side kick in on certain songs, some waves of early Finnish death arrive briefly, but most of these innovations come in the earlier moments of the album (“(Tales of the) Sinister Appearances”, “Into Obscure Abyss”) where the songs appear to be written more recently whereas by the fourth track (“Obsessed by Gore”) the band have already signaled back to some of their stronger impetus by way of undying love for Merciless and the bestial glory of pre-‘Beneath the Remains’ Sepultura. “Obsessed by Gore” is actually not that far from the more pure intentions of Nocturnal Witch‘s black metal side with consideration for the drumming and some of the mid-paced riffing, lending a bit more of that “not sure what to label this” feeling of mid-to-late 80’s black, death, and thrash metal influenced bands. If you’d caught any of the fifty Thrash ’til Death entries from me back in 2019 you’ll know that is my shit a thousand times over and I was maybe thirty seconds into ‘Sanctifying Ritual’ before I’d loved it.

“Stained With Rotten Blood” just fuckin’ strangles me every time it hits on the tracklist, bringing the nostalgia of firing up ‘Schizophrenia’ for the first time as a teenager and feeling like I’d been stabbed and left to die. It also comes on Side B along with some older tunes from the first demo rejiggered and imagined with an equally feral but more precise set of performances due to the simpler whack of late 80’s thrash metal being a more prominent, untouchable influence. No doubt if you’ve been around the block in terms of ‘old school’ death metal and already lived through several waves of traditional extreme metal throwbacks and found a lot of them performative, nostalgic and heavy but frankly indistinct I can sympathize with that on some level as the need for memorable songwriting is paramount to a mere exercise in fealty. Where I’d argue for ‘Sanctifying Ritual’ being a special and accountable record comes with the sense that these songs were developed over a decade’s time allowing for a worthy amount of consideration (back-burner or not) for their attack, sound, and performance.

I wouldn’t suggest every song is flat out a fuckin’ barn-burning classic you’ll never forget but I will endorse a strong oeuvre expressed, a wide range of stylistic touches old-and-new that do just enough to bear the weight of classy old fury from teenaged garage metal fucks in the 80’s while refining those feral instincts so that they don’t appear trite or flippantly squashed out. “Curse of Evil” is a fine example of this, a slightly blackened circa ’85 Kreator bark enveloping a real pusher of a chest-beating ‘Leprosy’-esque death metal piece. The basal references are there and self-reinforcing by design but Sanctifying Ritual‘ve done enough with their composition and sound design to fully drag me along for the ride. “Carved in Rotten Remains” is perhaps an extension of this, reversing the roles where howling thrash metal receives its death-scourging and blackening in waves making for a most pivotal and stunning piece on the full listen. From the first chord of “(Tales of the) Sinister Appearances” to the final crawling roars of “Abominable Death Rebels” I am thrilled to dust and bones to sit with Sanctifying Ritual‘s debut LP and found it infinitely enjoyable across countless listens, they found a solid lane stuck with it and warped it to Hell unto great results and for that reason I can give very high recommendation of ‘Sanctifying Ritual’. 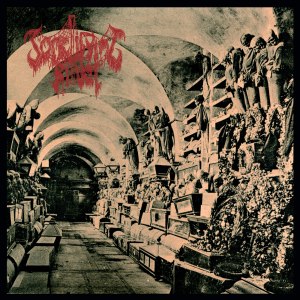