Sickened by their passionate summoning unto a dispassionate and chaotic alien world of callous ghouls and insufferably voided enthusiasm, you can nearly see the soul being tugged free of the willfully fraying ‘self’ as Durham, North Carolina noise rock’d gothic doom-punk quartet Wailin Storms gives up their ghost for the sake of the haunt on this moving third full-length. ‘Rattle’ comes deep in the lungs, creeping out as an increasingly dry cough amidst knowing, frightened eyes and when its final tormented spiritus looses it leaves little more than scorched ozone upon a very dead, collapsing chest. No doubt these Texas-spawned and Durham-bound saw the way forward nearly a decade ago and it’d been a thick, wavy molasses drift to stroke-and-scream their way through but, the snake-bitten sound only recently found the songs that’d disenchant the poison sting. ‘Rattle’ is a breakthrough, where Wailin Storms‘ noise rock-sized delta blues with a rousing southern gothic distemper meets its maker, hopelessness, and relishes in the existential anxiety resultant.

If you’d just picked this LP up and spun it hard all weekend, or week (or in my case two months straight) your first impression probably isn’t far from mine: They’ve been doing this and doing it this good for decades, right? No way, their stylistic progression within the last decade is a fascinatingly intuitive slew of “feeling our selves out” releases and getting there with the band is half the fun. In some sense the original conception of Wailin Storms difficult to describe but easy to hang with style was there as early as the first EP ‘Bone Colored Moon‘ (2012) where their unhinged sophistication and moody heat-stroked sound was distant had a bit more country twang with the mere suggestion of ‘November Coming Fire’-sauced rock inspiring with seduction from afar. Their second EP, ‘Shiver‘ (2014) was more present with choral voicing, big harmonies as if you’d put an early Danzig LP on the wrong speed, wailing enough to live up to their name. No doubt the origins of their sound pull from more than deathpunk and gothic rock, as “Shiver Shiver Shiver” would fully attest to what Wailin Storms were in their heads, something far more bluesy, psychedelic, and distraught with real fearsome passion behind the eyes before they were able to realize it in song.

A bit more grunge-punk surfaced on their debut full-length (‘One Foot in the Flesh Grave‘, 2015) a guitar forward record attuned to the noise rock/post-punk ear with the vocals shoved behind two guitars and the bass snapping just above the drums. It was ‘Sick City‘ (2017) that finally struck gold in terms of songwriting and Justin Storms’ impressive vocal performances — ‘Rattle’ manages to ease the peaking emotional release of past works noise/garage rock clangor just enough that Storms‘ inspired belting-out howls the blues just as powerfully as the psychedelic goth-lurching doom punk guitar performances throughout. It is a mystic Nick Cave-esque level of eye-drooping and slumped over possession that drives each tune of bodily horror, tormented personal tales, lovers dead and alive, in revelation of a caterwauling mind that’d never fully understand the cruel mania of its earthly cohabitants. I cannot emphasize enough the rare pairing of meaningful, unique, and over-the-top instrumentation with a voice matching and exceeding it in otherworldly congress that exists here on ‘Rattle’. That they’ve managed this point of sky-darkening vitality in a succinct ~35 minute ride nails the savior to the cross, so to speak.

A mysterious omen hangs over every second of ‘Rattle’. From throwing bones to pulling teeth and drying human jerky, the fading stench of decay is at once miserable in its deathly 90’s arthouse noise punk n’ alt-rock creep forth and somehow romantically sentimental as the affected gentleman up front sings ’til the capillaries in his eyes all burst bright red. “Rattle” casts dispersion in every direction, slinking out on a cold desert night and echoing into the cold void before feedback swells and a brilliantly insistent noise rock buzz scrapes n’ whirls its intensely dramatic opening into an unforgettable event. “Rope” doubles down with a more aggressive pace and deeper-ringing, detailed sound design with all manner of swirling guitar effects nearly threatening to drown out an unforgettable vocal from Storms. Each of the eight songs shakes things up, shifting the mood, changes the guitar tone or effects map, emphasizes a bassline or gives the stage to the vocals and this inherent variety allows each piece their own importance; Some might blend beautifully into one another on a full spin yet each holds their own when snatch up piecemeal. Use of repetition as a narrative device becomes a nod to the aforementioned noise rock headspace enjoyed by the band, and much of it manifests openly within Storms‘ cadence as he relies on macabre goth rants and broken-man blues as he lets it all out; “Wish” is a particularly masterful use of this repetition to embody the character of the song, expressing as a scorned and unstable bout of coming to terms with, well, whatever horror awaits.

“Teeth” was the first song to really stick in my Peyer’s patches, swirling in my mind like an infection as I figured what exactly’d drive a man to, over-and-over, request his teeth be removed one by one. The image is incredible as the request but it is the dead-eyed tone at which it is depicted that embodies the frightening allure, the collar-popped bad guy sneer translated into whatever modern analogue that’d work in today’s apathetic dark rock reality. “Sun” is by no means the final piece of importance by the time it arrives near the end of Side B but it is another huge highlight and perhaps the one that’d spin in my mind even without my cans on. The swerving guitar licks, the staggered beat, the devotional and impassioned penitent timbre of Storm‘s delivery actually reminded me of seeing Live on television in the 90’s. Sure, I didn’t know what the dude was going on about but man was he passionate about the god-fearing insanity of it all. I know that comparison is horrifying to some but I only mean to suggest that Wailin Storms are something special because the go for it, they’re pushing the limits of passion in every song enough to stir the listener into an overwhelmed state. Frankly “Crow” is just as huge a moment, probably -the- beast cut of the lot, but a full-on track-by-track analysis on my part would only serve to spoil your own connection to each piece. They are meant to be gripping, moving, and set ready to pounce upon any listener open to their unique vibe. I can only suggest swinging your head back and letting ‘Rattle’ in, immediately.

Of course I needed an extra week or two with Wailin Storms and I’ll probably keep ’em in rotation throughout the summer for the sake of cultivating the inward rotting ‘self’ it inspires in me. About three full spins in a row was my limit as I dug through the LP initially but once the first weekend or two with it hit I’d probably work up to about six full listens at the most; Returning to it and wanting to feel the gushy payoff of ‘Rattle’ always yielded the desired effect yet there was a period of “Shut up dude” in terms of the vocals early on before I’d attempt to hear and feel what Storms was putting out. If nothing else it is a powerful, bluesy modern rock record that manages stirring boldness in an era of dryly stoned apathy and that’d amount to seriously worthy personality in my book. It’d all come together for me as I devoted more time to ‘Rattle’ and as such I can happily give it a high recommendation. 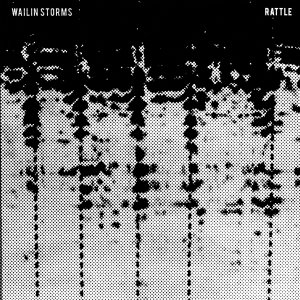