Merging the competitive sport of primitive drop-tuned, filth-choked death grooves with singularly resolved Demilichian six-angled concepts this Bristol, England stationed death metal duo re-emerge from a complex web of slime and hair with a far more substantive and memorable second EP. This time around Cryptworm‘s melty blood-puking oeuvre fleshes out, prolapsing into vomited inhales and jagged riffing that’ll be a familiar path through the nether-vibrated gag of pre-‘Nespithe’ demos (especially ‘…Somewhere Inside the Bowels of Endlessness‘) while dumbing most of those technical ambitions down into moshable-yet-crawling Impetigo warped bellows. Though they are not the fastest growing or most ornately horrific pile of miscellaneous parts snarling in the pits of modern death metal today, Cryptworm make a solid case for their sect of the sewers on ‘Reeking Gunk of Abhorrence’.

Although there are many bands who’ve attempted to put their own spin on the mind-rending spin-cycle of ‘Nespithe’ across these last two decades most of them rely on differently attuned atmosphere, heightened technicality, or a total restructuring that ends up taking more cues from ‘Tumultuous Travelings‘ and to be sure Garroted, Chthe’ilist and countless others deserve credit for blurring away the unsightly gawk of early 90’s post-‘Symphonies of Sickness’ exposed Finnish death metal. I don’t want to suggest that Cryptworm can be distilled down to those influences but I will say that it’ll no doubt be the first thing on your mind when firing up this EP. This shift in temperament comes after a handful of releases more in line with early Tomb Mold and Undergang starting with their self-titled demo (‘Cryptworm‘, 2017) which reeked of a project that had the right sound but were still unsure of where their style was headed beyond ‘old school’. Cryptworm‘s first official EP (‘Verminosis‘, 2018) followed suit for the most part, finding some bounding rhythmic force to work with but going nowhere with it until the final track, “Cadaveric Flesh Engorgement”, more or less suggested one potential path forward. A quick split 7″ with Archaic Tomb in 2019 would more or less confirm a filthier, groovier, belch n’ angle-grinding direction for the band.

“Festering Maggot Infestation” might be unsatisfying alliteration at a glance but the song itself is the suggested showpiece here for my own tastes. Therein we are served slow-but-technical death warps, guttural New York-sized beatings, intermittent spitting rasps, and generally the strongest implication of a secure musical identity to this bands credit thus far. The title track is similarly exciting as it rolls out, though it lands somewhere between thought-void chugging and a moderately satisfying breakdown. It isn’t as refined or thoughtfully arranged as Undeath nor is it as avant-inspired as Calcemia but this moshable Finnish Mortician-ized angle does ultimately work for Cryptworm. Each piece builds up in the mind over time, finding their own distinction even if the spread of tricks and ‘in the pocket’ moments available aren’t anything new or particularly dense. “Cesspool of Perpetual Decay” thankfully picks up the pace and returns to the swarming tide of the opener, eventually serving as the most intense and performative piece on the EP.

The production is totally sharp and nothing to sneeze at but I’d found myself imagining this band with ‘Steeping Corporeal Mess’-sized cacophonics applied and seeing the potential value of sticking with whatever Cryptworm does next. What they do next isn’t all that important for here and now, where I’d give a moderately high recommendation of this EP, but I do think they’re one or two more formative releases away from being full-length ready. The sound is there, the vocals are pure magick, the riffs are just crossing the finish line, and the application of a deeper conceptual (or performative) sensibility may or may not ever happen. As suggested, I’m on board for this record and to see whats up beyond. 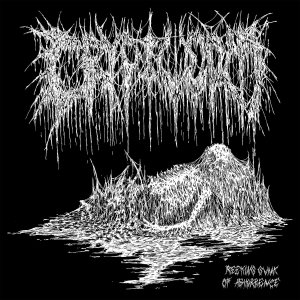