Transgressing dimensional borders through an all-too determined escapist obsession with astral projection, the disturbingly adept fellow who’d cross forbidden gates and unknowingly sever the silver cord soon finds himself a halved psyche, struggling away from the event horizon of a grand celestial war. The realization of a personal duality unchosen by the limitless curiosity of the individual begins to manifest as a cursed state of observation without (initial) interaction as the consciousness severs and surfs the violent rupture resultant of a great clashing nexus. He floats, frets, and finally sojourns with intent whilst transgressing irreparably severed bonds with time and space, mourning not only the lost corporeal but another half-self melting within paradoxical imprisonment. The gratuitous pure science fiction adventure resultant is less an epic poem and more a wonder and mystery charged pulp event backed by the “phenomenal technicological astrodeath” provided by Northern England-based technical death/thrash metal quartet Cryptic Shift, who’ve more than capably expanded upon the limit-breaking history of science fiction themed thrash metal with their own stunning debut, ‘Visitations From Enceladus’. Though they suggest there is no parable within the dimensional sojourner’s guidebook provided, themes of ambitious grand design and defiance of set limitations can yet be gleaned from this incredibly fine and brilliantly styled technical death/thrash metal debut.

Primarily based out of the Leeds area and at it since at least 2014 (originally as Crÿptic Shift) the core conceit of this project has always centered around the same core inspiration shared with bands such as Vexovoid, Droid, Hemotoxin, Teleport and various others where primal shades of Voivod, Sadus, Obliveon, and Death translated (by way of the intermediate success of Vektor, and Revocation) into classic technical thrash metal when they formed early on. In most cases these bands have moved towards progressive or technical death/thrash metal hybridization as skill sets, experience, and taste evolves. In the case of Cryptic Shift the progression wasn’t entirely linear but it had also not been too wildly divergent until their first official EP (‘Beyond The Celestial Realms‘, 2016) provided a more clear and polished picture of where they were headed. I wouldn’t say that I could’ve predicted the amount of Vektor influenced guitar techniques on certain parts of this debut but some of the more heavily-flowing moments akin to D.B.C.‘s ‘Universe‘, the robo-Obliveon meets ‘Testimony of the Ancients’ narrative within, and some exciting Nocturnus inspired quick changes were definitely within the realm of possibilities. Their early lead-up single ‘Cosmic Dreams‘ (2017) was more of a springboard for ideas as it’d implied the general motion of ‘Visitations From Enceladus’ before it’d been conceived at its highest state which we receive willingly today. If you’ll scroll up or just stare a bit closer at the names I’ve dropped no doubt you’ll get the suggestion that this is fine work inspired by everything from ‘Farseeing the Paranormal Abysm’ to ‘Unquestionable Presence’ and back again.

If you’ll recall the not too distant fervor surrounding the lengthy prog rock influenced “Awakening from the Dream of Existence to the Multidimensional Nature of Our Reality (Mirror of the Soul)” from the entire B-side of Blood Incantation‘s latest you’ll note that Cryptic Shift have managed something equally impressive and perhaps even more compellingly arranged as ‘Visitations From Enceladus’ begins with the ~26 minute long opener in six parts, “Moonbelt Immolator”. This track can be taken in a few different ways though it is particularly daunting to receive as a singular piece. Thankfully there are some pauses and several shifts in tone and sub-genre spin as each section of the piece expresses. I’ve chosen to accept this fantastic song in distinct sections for the sake of communicating peaks and valleys. “I – Detached From the Xenoverse” implies severance from the silver cord in its instrumental preamble and provides the first taste of Cryptic Shift‘s interest in communicating the narrative in a sort of tech-thrash opera a la Mekong Delta‘s more reaching efforts, a sci-fi hesher orchestration if you will. By the four minute mark we’re surely in “II – Skirmish Above HD 10180 h” territory and witnessing a great universe sized clash of cosmic beings. This is where the riffing begins, cracking into ‘Outer Isolation’ meets ‘Piece of Time’ bliss beyond the five minute mark. This is going to be the clincher moment for most folks as it outshines all previous technical wizardry and energetic abandon from the band on previous releases. Cue the robot vocals, and some of the finest riffing on the album leads up to the celestial break of “III – Interstellar Lands”, a space-faring instrumental that is clean and jangling with some sweetly placed dual leads and shredding. Without digging into each of the last three pieces of “Moonbelt Immolator”, think of it as a progression of influence for the band from modern technical thrash in the early 2010’s towards classic technical and progressive death metal notions. The peak of this song, which begins to feel like a mini-album itself, is undoubtedly the masterful way they not only come full range with influences but meld them together during the most intense conclusion of the piece. Side A is reason enough to buy this album, and “Moonbelt Immolator” is essential listening for technical thrashers and classic prog-death/thrash lovers alike.

Phew. Hey, there is yet another twenty minutes of riffs left and on the last three songs we’re reminded that Cryptic Shift didn’t arrive at this fantastic playing ability without at least learning how to put together a solid technical death/thrash metal song otherwise. “(Petrified in the) Hypogean Gaol” has this swinging, balls-out confidence to its otherwise thoughtful progressive thrash metal abrasion that is but bombastically achieved and still yearning for some connection with the listener. “The Arctic Chasm” ends up making the prior track feel transitional or at least a passage of respite before the more dramatic phrasal sense of “Moonbelt Immolator” begins detailing fantastic new worlds, new realms of wildly named planes of existence and fissures in the time-space continuum, here it seems the protagonist is truly hitting the most horror-inducing and fantastical realms while Cryptic Shift hammer out stunning bursts of technical-but-ancient snarling death metal, scraping and trilling its way forth perhaps reminding me more of (earlier) Nucleus or Obliveon rather than the constant suggestions of Timeghoul from other listeners, nothing quite that brutal lands therein yet the experience is surely tripping some fantastic light along the way. “The Arctic Chasm” ends up being my personal favorite piece here not only for its place within the larger narrative of the album but also for the thrilling dynamic of the piece that provides shades of technical thrash metal, death/thrash metal and their own brand of pure death metal that is frankly pretty goddamned menacing when they work their growls up to a storm. “Planetary Hypnosis” feels entirely related, almost as a second half of what “The Arctic Chasm” brought and this feeds into that greater sense that Cryptic Shift have intentionally composed these pieces to fit the ‘feeling’ of their narrative adventure while also pushing their own ambitious technical capabilities as far as they can while still remaining musical and tastefully achieved.

That’d be my bigger takeaway from the listening experience: Cryptic Shift wants to beguile and thrill the listener but not suffocate them with ideas, instead they weave a mightily complex technical death/thrash storm that gives enough room to breathe and digest their impressive presentation. In this sense it is a masterfully achieved debut, musically viable and nowhere near as naive as debuts from many of their contemporaries. I could see the size and stature of “Moonbelt Immolator” being intimidating and demanding for many listeners but it hits just right for my own experience, which (once purchased) ends up being one side of an LP at a time. If anything one song/one side becomes even more endearing over time as it not only speaks to the ambition of the project but their understanding of where the artform can be stretched tastefully, where they can fit in their own capabilities and thoughts into a crowded space and find the right listener. Honestly I’d grabbed this record thinking it’d just be a quick four song EP to rip through when I was too busy for anything too demanding and instead I haven’t been able to focus on anything else since I first put it on. Surely a contender for one of the sharpest thrash-related debuts this year and a debut that gets its mark exactly right. Very high recommendation. 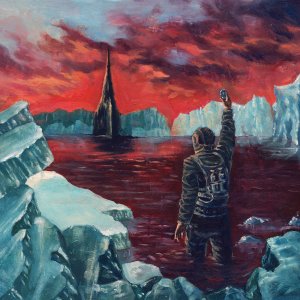