When you’ve achieved state and station as cosmically high as Hobart, Tasmania based arcane musician Ol’ Rusty had with the third full-length from The Wizar’d (‘Ancient Tome of Arcane Knowledge, 2013) the obsidian plateau achieved appears infinite as the howling eternity of the known universe — Escape from charnel oblivion demands slow soul sacrifice to abate the cursed spellbinding blur of the mind, and drunkenness of spirit, that comes from wielding raw mana day after day, year over year. Eight long years of snapped wands, fraying hats, ensorcel’d cloaks and all manner of daimonian delight conjured now reap the wheat leaf’s rust and dark magick doom as ‘Subterranean Exile’, a set of seven ecstatically malevolent spells conjured slow and ruthless.

This Australian doom metal band hold some special memories for me in the sense that I’d collected basically all of Barbarian Wrath‘s releases through about 2011 but it took some extra effort to track down The Wizar’d‘s second full-length (‘Pathways Into Darkness‘, 2010) and the reward for finally snagging it was its style — Exactly the sort of fucked-up occult doom metal I’d hoped it’d be at the time but also even more over-the-top strange than I’d expected. Formed around 2004 and playing a style of doom metal heavily influenced by the first few Saint Vitus records, The Wizar’d emerged within an era of true doom metal resurgence where the 70’s heavy metal history of traditional doom metal spiritus was emphasized, eventually rolling into some public obsession with occult rock and such. This period of time exposed me to some of my favorite groups, such as Hour of 13 and Pagan Altar so, you can imagine why a record like ‘Pathways Into Darkness’ might feel and sound important as an esoterically achieved and organic traditional heavy metal record with dark-sided themes. Personal anecdotes aside, the real breakthrough for The Wizar’d came with their well-received en masse third album.

So, why did it really take eight years of songwriting to produce a record even more impressive than ‘Ancient Tome of Arcane Knowledge’? Five busy years with Ol’ Rusty‘s label Heavy Chains Records including releases from his other bands Tarot, Dracula, and Torpedo. Right, if I was in four fuckin’ ace bands all of the sudden putting The Wizar’d on hold after such a high point makes sense. So, where to next with ’em, then? Darker, even more epic, even more traditional, and a brilliantly ancient feeling all make this fourth return to their arcane metal magick a worthwhile affair but not a savagely different one. No doubt you’ll hear the first couple of Pagan Altar records as a major influence for all of The Wizar’d‘s releases since 2008 but this one pulls away from the exasperated wail of previous records while retaining the distinct nasal affect. That resemblance alone is enough for me, that is how easy I am as a fan of the highest tier of classic doom metal artists, but what sets things off a bit more comes with plenty of incredible lead guitar parts which when combined with Ol’ Rusty‘s vocals make for a traditional heavy/doom metal record that occasionally slips into bouts of lucidity resembling the mystic ancient rock of Legend‘s ‘Fröm the Fjörds‘. Sure, you could consider that a stretch on a superficial level but I think folks will agree once they’re on board with Side B. Otherwise the important references are Pagan Altar, Witchfinder General, and perhaps Manilla Road.

A second theory for the void of activity in between records, and perhaps a more viable thought, is that one must feel doom’s claw at their neck to create truly fantastic doom metal for the ages and this takes some time and experience. Unless you’re on heroin or whatever might amplify that feeling, eh? That’d be the first observation made as I became fully immersed in the crisp but spaciously presented guitar tone and five hundred seat venue-sized heavy rock drum presence of ‘Subterranean Exile’. Despite the dark fantasy and ancient evil heavy metal lyrical focus of the record the feeling of a personally sourced dread and anxietous impending doom comes across particularly genuine within the vocal work as the album plays. More clearly stated, both wondrously performative dark fantasy and earnestly crumbling humanity are showcased throughout this fine record that wafts between epic heavy metal and classic doom metal ideals. “Wizard’s Revenge” has its own determined tooth to its performances, and the rallying cry of phantasm-sourced guitar leads supports the ominous narrative explored. “Long Live the Dead” is a keepin’ it true metal stomp, a plod forth that provides just enough space between each kick of the drum for a shake of the fist and a sway of the hesher mane. The conclusion of the song with the line “Behold the funeral of the universe…” and the fantastic harmonized guitar solos that send it off towards the sun served as one of the bigger initial highlights that’d kept me glued to all of Side B for quite a few spins.

The Wizar’d picked a fine time to return to the realms of man, in the midst of a cataclysmic year already marked by deep craters of fantastic doom metal and traditional heavy metal records. ‘Subterranean Exile’ isn’t a fireball from up high but, a belch of flame and molten iron from a jagged uninhabited ravine where the Earth is eldest. A fantastic record for my own taste and a fine companion to Cirith Ungol‘s return nearby. This inspired and long-awaited return undoubtedly deserves a high recommendation and a place among the best of the month. 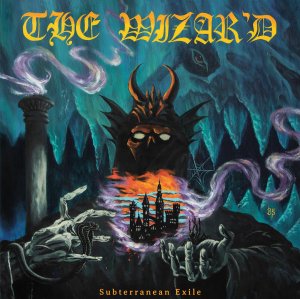