Even the most cursory dig through the first wave of underground extreme metal acts in the early 80’s reveals a spellbinding fractal blast of ante-upped variations beyond Slayer, Hellhammer, and Venom that could not be contained. By 1984 the black blood of satanic speed metal had struck the far corners of Canada hard, reaching (now) well-known freaks in Ontario and Quebec for countless undisputed classics yet the far west edge over in British Colombia was basically shit outta luck until 1985 when a few evil speed metal demos began to crop up. Depending on your tastes in thrash/speed metal it’d be for good reason that few remember the earliest rungs of Vancouver B.C. area thrash; Most of ’em were teenaged kids having fun ripping out brutal thrashcore (Adversity, Karrion) and the heavier, deranged stuff didn’t show up until Armoros and North Delta, British Columbia based thrashers Witches Hammer had figured out their riffs. Witches Hammer weren’t the most technical or inventive band in the area their firestorm of energy was a true infestation of evil that’d bring extreme thrash to their scene as best they could during their high school years. Anyhow, their long lost first official record was shelved back in 1988 and despite three decades of popular demo compilations and such, original members Marco Banco (Tyrants Blood, ex-Blasphemy) and vocalist Rayy Crude didn’t officially reform the band and set to work on their debut LP, ‘Damnation Is My Salvation’, until 2018. What in the hell have they come up with here in the maelstrom of 2020? An absolute ear shredder, a true-as-fuck riff fest of a thrash metal album that incorporates influences from 90’s black/thrash and 80’s death metal along the way.

Go ahead and put on ‘Damnation is My Salvation’ without any auditory context and you’ll undoubtedly get a brutal thrash metal record with heavy leans into the ferality of early Slayer, the jagged back-and-forth chunk of Baloff-era Exodus riffs, and even some Possessed influenced guitar runs. Riffs are written with a hook, a sense of rhythmic motion one could only glean from the 80’s response to British heavy metal songwriting that’ll instantly click into place with folks who have well-ingrained ’85 thrash sensibilities. Compare this feeling with say, Possessed‘s much more modern and overproduced three decade long-shot ‘Revelations of Oblivion‘ nearby which barely cracks any meaningful soil for me personally. This isn’t just because Witches Hammer were crazed teenagers in the mid-to-late 80’s but because they’ve included songs written back in the day, stuff they were known for even if only a few people knew them: “Frozen God” and “Witches Hammer” were both originally from a self-titled demo in 1985, which was included on a compilation (‘Canadian Speed Metal’, 2003) of their ’85 and ’87 demos showcasing Razor influenced rhythms and some wobbly randomly fingered solos a la Kerry King, literally a 15 year old’s imitation of shredding. Likewise, and perhaps more importantly, “Deadly Mantis” hails from the aforementioned unreleased mini-LP from 1988 which received its own compilation (‘Stretching Into Infinity‘, 2005) paired with the bands best known release, the ‘Witches Hammer’ EP from 1987. Those late 80’s works are most definitely the jumping off point when Witches Hammer were looking towards the future, as you’ll hear some early Morbid Angel-esque whips on “No Limits” and the style of “Stretching into Infinity” itself is entirely related to what ‘Damnation Is My Salvation’ is today.

If you aren’t a rarities collector, a die-hard thrash and speed metal fanatic, a huge Blasphemy fan (Banco played second guitar on ‘Fallen Angel of Doom‘), or if you were able to resist that fuckin’ ace cover art no doubt you’ve no major reason to care about ‘Damnation Is My Salvation’ before you hear it. There isn’t a hipster hook here that’ll change that, I mean this is a straight riff album that wriggles up a graveyard’s worth of earworming thrash/speed metal riffs with the intensity of a late 80’s death/thrash record. Pair that fact with the psychotic darkness of black/thrash-esque vocals echoing from its core and the return of Witches Hammer starts to manifest as an ancient extreme metal fans dream and… probably nobody else’s. What’ll set it apart from the pack today? Witches Hammer sound like they’re a part of the Canadian thrash metal pantheon on this record which angles itself in the range of ‘Torment in Fire’-era Sacrifice and Infernäl Mäjesty‘s ‘None Shall Defy’. These were undoubtedly sourced from the jolt of Bay Area/Los Angeles circa ’85 thrash metal and ‘Damnation of Salvation’ likewise pulled from that place, and their own history, when composing. This isn’t unheard of or a major point of distinction until you become conscious of the extreme thrash metal climate of today where absolutely everything black/thrash is heavily influenced by the witching metal variety of classic German thrash metal to such a degree that entire bands hinge their existence on the fact that you don’t remember most of the riffs on ‘Endless Pain’. Even if they’re not regarded as anything more than a cult evil speed metal buzz from western Canada, Witches Hammer maintain the perspective of a witness to extreme metal’s big bang.

“Solar Winds” is pure damnation, a ripping speed metal song with death/thrash afterburners that first makes the case for this album being more than a masturbatory nostalgic event. Similarly gigantic, infernal grooves follow on the slightly more ‘Hell Awaits’ attuned title track and for the most part Side A feels “modern”, aggressive, and the kind of stuff that’ll pull in fans of everything from Demolition Hammer to Vomitor. A somewhat distinct shift comes with Side B as three of the songs are directly pulled from Witches Hammer‘s impetus and this is where steadfast pre-’90 or die classic thrash metal fans will start snapping neck hardest “Frozen God” is that perfect mid-set ripper, “Witches Hammer” is what I’d consider Venom-esque with its simpler but pure evil progression, the galloping bridge and nuclear dives in the last third of the song is easily one of my favorite moments on the record. Again, you can tell “Deadly Mantis” was a late 80’s thrash metal song as it might as well have been written by Morbid Saint or Blood Feast circa ’88 and the choice to place it at the end of the album right next to the goddamn clincher of “Nine Pillars” makes sure this ~32 minute record maintains its murderous energy throughout. If you can put on “Nine Pillars” and still resist buying this LP I dunno where we see eye to eye on thrash. The intro, the pause before the blast, the Possessed influenced runs, the ranting vocal performance, it all feels ancient and timeless as the best traits of Witches Hammer collectively reap one of their most effective pieces to date.

They got in quick, set off a few long-overdue nukes, and bolted before I could manage a single complaint. The past got its due service with a fair chunk of ‘Damnation is My Salvation’ and here’s hoping their future is doubly insane as the rest of the album suggests if they pick this gig up again. At just over a half hour and at least two hundred riffs I found myself listening to this damn record 3-4 times a day on average, it flows fantastically on repeat and provides a wild trip that appeals to my own taste in thrash metal, speed metal, late-80’s death/thrash, and bestial black/thrash throughout the full spin making for a worthy roller coaster between old, slightly less old, and newer sensibilities. There was never any question that I’d be recommending this record after the first full listen and thankfully ‘Damnation Is My Salvation’ is succinct and powerful enough to have held its value since. A high recommendation. 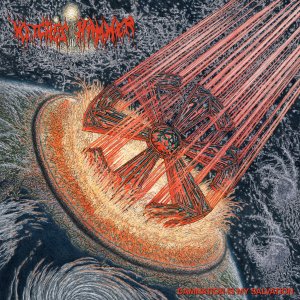