A six-gated mandala drawn to sate an eclectic yet deeply sentimental mind, curious of the oaken past yet compelled to a knowing dark future, fills the head with ancestral odes aiming fixation upon silent familial oaths unbroken. An aged tree’s burl billowing in geologic time as if an oily fire on a barren plain astonishes with its asymmetrical and naturally crooked up-swinging growth, offering strength and constancy from an irregular-by-nature heart. There can be no diagram that relates the lost infinity of the mind (when the corporeal shrugs off to death) better than a family tree, or any such audiovisual lineage passed through DNA, institute, movement or enduring methodology. What of the esoterica of avant-folk, the madness of psychedelic expansion and the magickal ‘art music’ resultant? No hard lines can be drawn in connection between those who wouldn’t ever belong to a damned thing, yet the honest intimacy and revelry in personally defined freedoms shared by psychedelic folk rock artists does create its own cloud-like lineage where all branches and leaves regard no true body whilst resembling a beauteous atmospheric form. Taste in auld textures, a knack for narrative, and some strong intention in meaningful creation of mystique and wonder connects past-and-present selves within the measured span of Hexvessel‘s fifth full-length album, ‘Kindred’ — A stretch back towards their ‘No Holier Temple‘ (2012) days in some respects but also a daring step beyond their expected path.

Having writ a bit of a messy bildungsroman for Hexvessel in review of their prior album (‘All Tree‘, 2019) I’ve had a few revelations since last March, the most important being that it’d been largely the work of Mat McNerny (Grave Pleasures, ex-Code) and could’ve constituted a solo album until a surrounding cast were called in to fill, broaden and hone the final product. This isn’t such an unusual modus but each Hexvessel album has approached past and present from a different angle and it is important to know what bent serves to seed the vision. ‘Kindred’ is that quasi-family of musicians, some new and some always there, sticking around and gracing the movements of McNerny‘s hand although his tastes and vision still drives the larger work. If ‘All Tree’ could be posited as a waft of ‘Dawnbearer‘ (2011) through the ear of a different mind then ‘Kindred’ is every possibility displayed since, succinctly stated and fused with the changeling soul alight today. Opener “Billion Year-Old Being” threatens to roll into a 70’s heavy psych roar as its High Tide worthy stomp n’ croon and early King Crimsonian gnarls break out into bleak and irreverent song, flexing the gorgeous progressive rock via psychedelic folk sound that Hexvessel has been warming since their second record. There it is clear that this is more of a group effort with no aspect too obviously adorned as an afterthought.

Marrying the quest for self-actualization with greater understanding of the subconscious, the necessity of duality for oneness, and arriving upon a genuine personhood beyond appearances and materialism, “Demain” fires up beyond the opener as a direct ode to Herman Hesse‘s regarded novel of the same name. A grand reflection of Jungian psychoanalysis that echoes Gnostic mythos and perspective, though I’ll admit the concept of Abraxas eludes me in finer, satisfying detail the subject of this song continues to provide some wild chills of interest on my part. The lounging blues-noir reverberations of that gushing, uninterrupted, and free ‘self’ expressed in song marks a second enormous argument for the earthen psychedelic folk spiritus of the album. Fair warning that I’m not sure I can avoid at least a nigh track-by-track here but we will eventually a bump in the road. Hexvessel‘s almost ‘gothic country’ treatment of Coil‘s”Fire of the Mind” is as beautiful as the original posthumous piece, delivered with a great mournful sensitivity and a true achievement of an arrangement. At this point in the full listen it is clear we are not dancing madly in the forests that inspired the Kalevala this time around but instead witnessing a dynamically sourced set of parts built into the body of Hexvessel.

“Bog Bodies” and its haunting by way of mud and moss preserved ancestral yearning serves as both a brilliant Druidic centerpiece for the darker, mutinous vibe of the album as a whole but also a transition from lounging cigarette flicking creature towards the tribal neofolk-edged single “Phaedra“, where some of McNerny‘s vocal register in Grave Pleasures seeps into the performance to incredible effect. There I’d say bit of the creeping movement from ‘Your Funeral… My Trial’-era Nick Cave & The Bad Seeds finally oozes into clearer view on this, the most appropriate Hexvessel record to go for at least an inch of it. My take on Phaedra (whichever version of the tragedy, that is) hasn’t changed much since college, that man cannot escape nature and one’s own nature will eventually lay them to rest in the apropos bed made. From that point Side B is no less daring and poignant though “Kindred Moon” feels like the first of three farewell moments that yet lands the hardest hit and this leaves “Magical & Damned” in its place as a ‘bonus track’ with a sentimental singer/songwriter vibe that works, but perhaps it’d been better placed immediately following “Phaedra”. That last glom of songs feel like leftover pieces of ‘All Tree’ that isn’t entirely out of place with the rest of ‘Kindred’ but each has a moment were they’d needed some extra sound design or, some manner of cooking to fit the tracer-filled and eclectic eyesight of Side A.

The mystic past resuscitated for the sake of a more meaningful and naturally aligned future, Hexvessel offer this fifth album as an experience if song made without sacrifices to candor, intelligence or deep spiritual significance. Post-millennium flower child kitsch, delta-spawned and swinging gloom, all at the beat of a free paganistic heart reads as more than devotional works or spiritual grandstanding. The free-spirited diorama of ‘Kindred’ is a haze of leaves and great roots rising from the fog of esoteric art and grand musical tradition set apart from the cold and exploited realms of rock music. For my own taste this record is just a centimeter short of a masterpiece thanks to its heady themes, eclectic and brassy arrangements, stunning performances, and incredibly refined rendering. As an emotionally captivating experience with plenty of room for cerebral examination the sense of wisdom and balance coming from the Hexvessel camp did eventually reach the darkly transcendental point that I’d wanted ‘All Tree’ to strive for last year. Consider it a redemption if your tastes likewise lean toward occult darkness, ancient psychedelic waves, and artists who do not hold back who they are for the sake of any pretense. A very high recommendation and easily one of the best non-metal releases of the year. 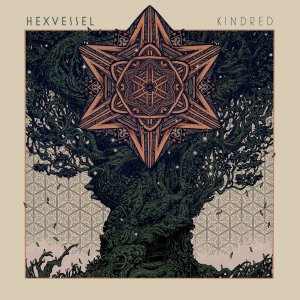