Scarcity of flesh hungry vultures and a lack of drying sunlight leaves our tower of silence emptied of dignity and stinking with putrid limestone-staining corpses. Unable to pulverize bone into dust ’til blooms of caustic bacterial sludge can do their slow, aromatic work. Countless headless corpses thrown to vermin like chum to swarming sharks, the decaying arts inflamed with the warm writhe of larvae, greyscale mold, and intrepid rodentia alike cutting fresh doorways through walls of skin and meat. They grow more deranged, frenzied with every bite! A dried blood-drenched and screaming half-leathered skull rattles free, snapping wetly to the dust coughing stone floor. The slap of hanging rot to soil is the final strike of the snare of death echoing in the long-dead mind a thousand patterns, a million ways to rot. One fractal suggestion bleeds into intermittent obsession for Saint Petersburg, Russia based death metal trio Pyre, who rain down old and rotten blood here on their second full-length album, ‘Chained to Ossuaries’.

Despite being conceived through the macabre act of unwilling bodily grafts and tightly re-attached corpse parts, for their love of death metal Pyre are no less guided by the simple principles of ‘old school’ death metal than so many others. Yet they are also more completely listenable than most, a generally independent artist with some powerful knack for stunning riffs and violent tirades that choke and mutilate as often as they excite. The body of Autopsy sewn loosely to the arms of Dismember and freshly controlled by the mind of early Asphyx, the early days of Pyre‘s actualization found distinction with a far too cranked Boss HM-2 guitar pedal doing the bulk of the heavy lifting a la Skelethal‘s debut or anything from Bastard Priest. This’d manifest as amateur but powerful work on their first EP (‘Ravenous Decease‘, 2012) a record heavily driven by Scandinavian and North American death metal influences and all the more remembered for its oppressive Swedish death metal guitar sound, which would expand tenfold on their simple-but-hammering debut full-length (‘Human Hecatomb‘, 2014), an album that’d receive several reissues and countless mentions as it aged remarkably well. ‘Chained to Ossuaries’ looks to maintain that specific niche of classic death metal while stepping away from the typical Swedish death metal guitar tone of the past.

Well, the guitar tone has changed somewhat but you’ll still hear a fair amount of Swedish death metal influence throughout the full listen, starting with the Repugnant-meets-Dismember opener “Impaler the Redeemer”, a strong volley of thrashing riffs and appropriately propulsive energy showcasing vocalist/bassist Dym Nox‘ (Blazing Rust, Teitanfyre) fine skills on the drums, his preferred instrument as it turns out, as the band continues to struggle finding a stable drummer. “Wreath of Crucifix” and the Vanhelgd-esque “Ornaments of Bones” suggest even more of an emphasis on Autopsy influenced death metal along the way to filling out Side A. These are fine moments that help make the case that Pyre aren’t as influenced by the Stockholm sound as one might assume upon first listen. The main event ends up being “Across the Shores of Emerald Fractals” a simple but effective mid-paced death metal song that truly understands the appeal of death metal in its most nascent, groove-slinging forms. This is a reasonable sum of Pyre‘s parts from the beginning, essentially a love for ‘Mental Funeral’ crossing over with the textural overdose of early post-Nihilist bands such as Unleashed but set in more plain terms and with influences from death/thrash and even more primitive death metal forms.

Innovation and modernity be damned if it means a healthy string of riffs and powerful traditional death metal tonality, a comfortable palette for this inspirationally performed album to pull from. Although the second coming of Pyre arrives during strange days, the skull-ripping riff-throttled value of the experience should be immediately clear to the average ‘classics obsessed’ death metal fandom as intended. There isn’t a ton to really extrapolate from the full listen beyond that, ‘Chained to Ossuaries’ is a fine vision of pure death metal delivered by way of some equally classic points of inspiration. The full listen is insanely repeatable, bounding, occasionally catchy, and worthy of a high recommendation. 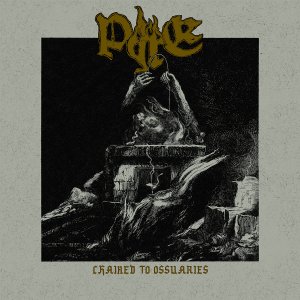