The ritual act of drawing down the moon to embody the goddess of that realm, a three-faced fallen angel whom ancient pagan folk would conjure in reference to time and transformation, provides some solace for the prophesier of destruction. Held captive by Solomon according to his refuted testament detailing many triumphs against daimonian forces, Enêpsigos remarks what a small and foolish man he is and curses the temple built from those conquests. The testament itself might be seen as an esoteric and unacceptable non-canon Christian text primarily for its self-contradictions, Greek authorship, and the very awkward confession that the king would lose his name and kingdom for the sake of loving a woman with different beliefs. Yet today this text reads almost solemn in translation with a half-hearted consolation for the many religions and pantheons of pagan gods disembodied by Christian censorship through cultural conquer, plagiarism, and erasure. A profound disservice is done to the history of mankind when an old obscure text with feigned reverence for the religions it’d quashed is mistranslated for centuries after, never given even the slightest context. The ancient Greeks were not ignorant to the phases of the moon, and there were never merely three. A quick glance reveals the goddess in question is an epithet of Hekate, posited as a demon from the new Christian perspective. All references today suggest her ability to “transform into Kronos” when in fact the text is not at all so literal but employing a banal colloquialism. That is to suggest that Christian ignorance is not only a plague upon culture, diversity, and free will but that it upholds a genetic lineage of those prone to ignorant and hypocritical behavior. Free your ‘western’ body, mind, and spirit (‘self’) from this ignorance and resurrect these “fallen angels” of humanity’s past by way of ritualistic and violent rhythms, wear their old symbols, embrace the dark corners of belief and release yourself from thoughtless acceptance. There could be no other goal ascertained from ‘Wrath of Wraths’, the second full-length from Norwegian black metal project Enepsigos who find themselves realized as intended within their second and most powerful phase today.

Officially formed in 2016 between vocalist V.I.T.H.R. aka Doedsadmiral (Nordjevel, Doedsvanger) and well-regarded drummer Thorns (Blut Aus Nord, Chaos Invocation) the purpose of Enepsigos was never to be a plain or orthodox being and when recruiting original guitarist/bassist Straff (ex-Sarkom) the trio would debut with a striking and melodic beast (‘Plague of Plagues‘, 2017) that’d been interesting for its blasphemic themes and somewhat unique use of certain tones reserved for Scandinavian death metal within their black metal sound. Despite it being a strong album ‘Plague of Plagues’ left the band displeased with their first album to some degree, not that it was distasteful or amateur but that it didn’t represent the intended identity for the project. Suggesting that ‘Wrath of Wraths’ is darker, more disgustingly twisted and violent in its ritualistic roar highlights the true intent of the project when juxtaposed with the previous album, and the introduction of new guitarist/bassist Rituul provides an appreciable ferality and menace intended by the creators. More spirited death, more anger, and more vigorous performance provides a notable reawakening for an already commendable project therein.

Whereas their first album appeared influenced by a myriad flux of classic black metal with some thrash and death metal ideas in the back of their mind it’d often lean into some ‘easier’ and somewhat predictable melodic fixtures. ‘Wrath of Wraths’ features an entirely different and much darker atmosphere despite the continued feature of (what sounds like) a prominent Boss HM-2 distortion built and downtuned 7-string guitar tone. I say ‘built’ because it is used to contribute to a heavier wall of black metal sound and not the sort of punkish death metal folks would typically associate with classic Swedish death metal. There are many more layers used but that one will stand out depending on your proclivities, yet the bigger point of interest here is that Enepsigos bear a grand and chaotic presence, far more bestially sourced and aggressive than their previous incarnation. It’d be fair to point in two directions at once when approaching ‘Wrath of Wraths’, first towards modern Norwegian bands that don’t resemble their own countrymen so directly, such as Dødsfall or Tragediens Throne and secondly towards the further twisted realms of earlier Ascension or Aosoth. A unique guitar tone and unorthodox riff structures go a long way to differentiate from otherwise comparable bands and the very Norwegian use of lead guitar to voice certain themes helps to leave an impression of a being no longer of that world, instead born from an occult transcendence of it.

Unholy in their twist upon blasphemous articulation but never dryly stupid about it, V.I.T.H.R.‘s lyrics are presented as religious tirades and hymnal meditations with some matured Satanic devotion in hand. His vocals are often as tortured as they are knowingly papal, reminding me of earlier Funeral Mist at times and providing some incredible mixed presence of might and strained defiance throughout. ‘Wrath of Wraths’ might last on most shelves for its striking tone, curvaceous riffing, and even more beautiful cover art (via Benjamin A. Vierling) but the empowered prose within should offer an extra layer to delve into for greater value for those inclined. There I think I’ve indirectly hit upon the thorn in heel, though, as the riffs are mighty thanks to their swelling atmospheric builds and thunderous strikes of furious expansion (see: “Water and Flesh”) amidst the great wall of sound therein yet I’d found some songs vacillating between distinction and background blending throughout many full listens. The charge of opener “Shields of Faith”, the grinding bends and celestial chorales of “The Whore is the Temple”, and the writhing snake of “Seventh Seal” are unforgettable in their own way but I’d found myself remembering the album as a whole rather than any particular song.

Chaos and collapse amongst the waves of overwhelming rhythm is very much a thrilling and immersive place to set within Enepsigos‘ strongest output to date though I found myself wanting a bigger ‘peak’ within the album, a great mountainous transcendence to fit the gigantic sound they’ve designed and it’d not fully land upon me until the very last moments of ‘Wrath of Wraths’ with the middle section of “Cups of Anger”, the last song and first ‘single’ from the record. There a dramatic spray of wind-blown chimes, chanting, and a brilliant dual serenade provide that ‘peak’ (or, payoff) for the journey to the deepest recesses of Enepsigos‘ temple before picking up where the first third of the song left off. I’d felt like this is where the band crossed the line completely, pushing me to accept their greatness and reexamine the whole record with new ears and opened eyes. From there I’d begin to obsess over the album’s unique qualities even more. Even still I am discovering parts of ‘Wrath of Wraths’ that are exciting and repeatable thanks to the abrasive and dissonant lean of certain movements. There is more to hear, more to see, and plenty of meaning attached to this record and as such I can highly recommend the experience but not only once, and not lightly. 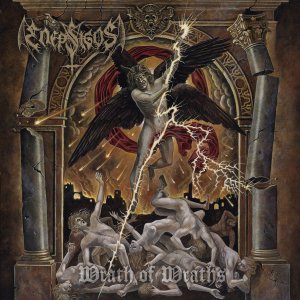