Cracked and drained, kicked and hammered against the cold concrete of our pacific northwest with the flaps of swollen lips hanging loose like a freshly popped collar — My skull cannot help but smile when battered of its flesh for the sake of murder’s mutual orgasm, shared between the passionate and I their victim. Clubbed from all angles by all manner of implement the shattered eye’s last vision is that of a white blur and… a Reebok logo, with a puffy tongue on the shoe. It isn’t retro thrash that killed me today but death! Pure eject-button hitting, kick-flippin’-assed fuckin’ death metal trio Disembowel hail from my homeland Portland, Oregon and do so unceremoniously create actual bonafide, nuisance free death metal of the ‘old school’ ilk. Firing up their debut full-length album, ‘Echoes of Terror’, feels like slipping on a silk-lined bodysuit made from the flayed skin of someone much larger, inhaling the gamey stench of preserved, stretched and sewn human leather whilst appreciating the certain set of skills and morbid taste in art it took to make it happen.

I’ll go out on a bloody limb here and suggest that Disembowel were named after a song on Autopsy‘s ‘Severed Survival’ and that the conception of this trio’s alignment stemmed from friendships made within Portland’s not unreasonably active thrash metal circles (see: Raptor, Maniak). This isn’t a death/thrash metal experience, though, the goal here is pure ’89-’94 death metal brutality that pulls from Florida (Massacre, Deicide‘s debut) for structure and New York (Cannibal Corpse, Immolation‘s debut) for its attack. These are loose references but folks call a band like this ‘meat and potatoes’ for good enough reason, they resemble the extremity of an era that wasn’t such an arms race for technique or gimmickry when songwriting and riffcraft were of the utmost importance. While many of their peers obsess over crypt crud-sucking sound design and morbid simplicity there is the sense that Disembowel arrived at a point of authenticity by aiming for the garage, not the ‘stage’ or the basement. If I had to wave a finger in the right direction I’d probably rather compare them to Torture Rack but in my mind I picture this band on an opening bill next to old forgotten classic bands like Morgue (Illinois) or Rottrevore.

So, just another ‘old school’ death metal band, eh? What is the big deal? Sure I mean I’d have agree with you if I’d only heard their first demo (‘Rehearsal Demo‘, 2016) and the cleaned-up versions on their official ‘Dramatic Decay‘ tape from that same year. The potential seemed pretty far off into the horizon but the long road towards ‘Echoes of Terror’ has allowed Disembowel the time to find the exact right attack and sound that feels authentic and updated for the modern swarms of classic death metal influenced bands bashing their way up and down the west coast United States today. In this sense I don’t see the trio as a trendy gig, just cognizant of what folks are stirring up down in Los Angeles and up in Vancouver (B.C.) without sounding like a scene-ass band in the process. Justify it, dismiss it, think nothing of it, whatever, if you’re thinking about anything other than the riffs when songs like “Immolation” and the absolute mad-lad chunking riffs of “Chuffed” kick in then, you were hapless to begin with. I wouldn’t say that this is just a pure riff salad album, there is an intentional direction and narrative provided within the full listen, but the riffs’ll undoubtedly be where most death heads connect with the music first. Oddly enough I, being the incapable guitarist that I am, personally went straight to the drumming and couldn’t help but obsess over the late 80’s Reifert-esque punch that vocalist/drummer Sergio G. (Menacing Terror, ex-Mangled Corpse) brings to the album. This isn’t the most obvious point of growth for the project since 2016 but it is absolutely the most important in distinguishing this album as one that’ll last in a record collection rather than pad it out.

Deeply coughed vocals, a malevolent groove obsession, violent percussion, and you get the idea here. This is a fantastic ‘old school’ death metal album from young fellowes prone to this sort of violence who are yet unwilling to dumb down or over-complicate their wares. The exact right sort of taste level persists and as such I can give a very high recommendation for ‘Echoes of Terror’. Disembowel have room to grow from here, and they should definitely make another album, but this one is a bright highlight for the first half of the year thus far. 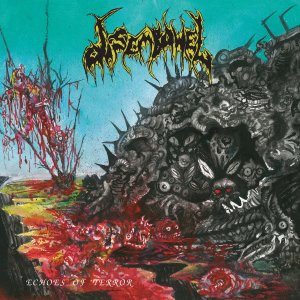