When gauging a fellow metalheads worthiness in terms of pure doom metal I’ve only ever needed to ask two questions. First, Reagers or Wino? Since you picked Reagers, we are pals but, can you explain why? In the last two decades I’ve written far too many words, and numerous enchanting reviews, belaboring the point that the expressive power of the man himself is doom metal’s godhead eternal but I’d rarely elaborate on where that particular sphere spread its influence unto the generations beyond. Nowhere is that tone, cadence and flair for the dramatic more felt than within the greater history of Finland’s true doom cult. Any admiration for Finland’s greater history of traditional doom metal comes naturally to the Reagers-era Saint Vitus fandom as the nation’s ‘biggest’ underground names have developed their own spiritual informatic from records like ‘Die Healing’, inventing a distinct tribalistic phenomenon of sound design and musical personality that has long extended an inspirationally over the top classic heavy metal sensibility to the world. So distinct is the Finnish doom methodology throughout the last few decades that its popularity spreads as if a particularly climate-hearty grape, where a band from Chile or the United States might get the awkward grace of being referring to as ‘Finnish doom metal’ in style. Without a doubt it were the popularity of Reverend Bizarre that’d spread the word loudest in the 2000’s and their calling card comes with a distinct vocal style that remains a tough resemblance to escape for most newer bands. Though the core of Helsinki based trio Cardinals Folly has been active since ~2004 and represented a distinct prospect even in nascent stages as The Coven, they’ve never fully escaped from the superficial observation of resemblance due to their peers representative status (even beyond death.) A blessing and a curse, that which doesn’t matter either way, but it bears some insistence that today we see this deranged pagan fellowship for their dark and maniacal forest cultivated and not plainly for the trees as their fifth full-length ‘Defying the Righteous Way’ arrives bold and bristling.

Ah! A chance at redemption for the sins of MMXVIII when a flippant review for ‘Deranged Pagan Sons‘ on this site was actually pulled from a quick selection of mini-reviews for another site as I bulked up the first couple of months of Grizzly Butts existence with less serious thoughts. Even worse, the review talked down to the album and didn’t give it credit due for its own ideas. Even worse still, I’d given it the incredibly awkward score of 4.15/5.0 while placing it in the Best of 2017 list soon after. A caper! Don’t worry, I am merely a different sort of idiot today and continue to regard the fourth Cardinals Folly as one of the best ever traditional doom metal records to come from Finland. Sure, it joins a long list of greats but that record has had serious legs in my collection thanks to is remarkably clear melodic voice, the expressive work of vocalist/bassist Count Karnstein and the still gritty production that’d amplify their brilliant guitar tone, and inventive use of extreme metal and punk influences. Before I sat down with ‘Defying the Righteous Way’ I had to coach myself, slapping mercilessly at my own face and insisting that I don’t spend the coming hours (er, days) comparing it to the previous record. Alas, I did mention that I am still an idiot.

Without delving into the bands past discography too tediously I do believe the right working relationship has been the key to success for connecting the songwriting process prior to each records capture and render. It isn’t as if the records prior to ‘Holocaust of Ecstasy & Freedom‘ (2016) weren’t good, in fact I’d say ‘Such Power is Dangerous!‘ (2011) is almost more wicked for its too-long pieces and less controlled vocal style, but it does feel like the third time was the charm for the band in retrospect. They’d struck upon a special formation with the addition of drummer Battle Ram that’d inspire a perceived upward trajectory in terms of an impressive amount of detail applied to each pieces construction as well as bolstered clarity of tone with the raw edges needed for true doom metal expression applied. In 2019 a remarkable split with Lucifer’s Fall would blow my mind, and helped me to realize I was so overdue for a fix of their wry and psychotic style of doom metal — A traditional heavy metal design prone to snarling extremist fits, galloping Bathory-isms, and rushes of down-stroked punkish energy. None of this escapes the foul tip of the usurper’s tongue (and its accosting cries of the Bizarre ones) when and if Cardinals Folly ever stops being particularly deviant and free-spirited in their occult-toned lyrical explorations, and thankfully they’ve kept it weird from the start.

Exploration of occult themes, daring fiction, and some darker subject matter has long been a major hook in my side, enough that I’d go on wondering what Cardinals Folly might explore in theme next yet, this was the first record where I’d the sense that the subject matter had taken a step back towards the high-fantastical realms of their earlier works and dwelled far less upon ancient unimaginable spiritus of the occult. Cleverness takes some precedent over total stone-faced seriousness and though that’d long been the case this record feels more human, more ‘classic’ for the raised eyebrow of its wit. Otherwise, ‘Defying the Righteous Way’ continues the stylistic thread provided by their 2019 split release arriving with neither a stern face nor any specific ancient obsessions so completely in mind. The focus instead lies in the hands of very capable doom metal songwriters who’ve done some remarkable work to appear as the epitome of Cardinals Folly while straying deeper still beyond typical limitations. “Deranging the Priest” is the triumph and the payoff for their respective excesses (and restraints) as its catchy, bounding mid-to-fast pace soon breaks into remarkable black metal inspired moments. This could be replicated a hundred times and still captivate me, the seamless rolls to and fro between snarl n’ steed-riding gallop and their already exceptional doom metal palette soon becomes a remarkable spire within the memorable map this varied and powerful doom record realizes.

Momentum and monolithic textures are tenets of Finnish doom metal but there is no sense that Cardinals Folly ever write for the sake of an intended ‘sound’, in other words their style is an expression of sharp taste rather than an self-conscious goal. The momentum built across ‘Defying the Righteous Way’ comes from writing heavy metal the proper way, in a bunker and through jammed sessions, slowly crafting songs by way of sweat and countless hours of vested time. As a result the whole of ‘Defying the Righteous Way’ feels tied together in mind and body; Arranged by instinctual choices and delivered with some muscle memory for the power of its two predecessors. Side A eases from its wild “we’re back!” opener “Stars Align Again” towards freshened ideología on (“Deranging the Priest”) toward punk n’ NWOBHM jogging hulk (“Witchfinders”) and this means the real slug-doomers out there will have to wait about fifteen minutes for the first slow burning pyre of “The Great Santur”. There is great pressure built leading toward the end of Side A and its eight minute conclusion is a balmy piece marrying the sludged-skull of Lord Vicar with a bit of ‘Hammerheart’ spirit applied to the vocals. Cardinals Folly appear unstoppable at this point, confident in their stride and showing all of the keen ideas gathered to date within the space of four songs. Have they delivered their best album yet?

Side B operates with a similar burst of energy to start (“Ultra-Violence”) and a plow towards the downtrodden fields of doom, horror films, and bloodlust after. “Last House on the Left” is the one song on the album that doesn’t stick beyond the screams of horror within, it is still classic Cardinals Folly in spirit enough that the flow and the fire of ‘Defying the Righteous Way’ is neither disturbed nor mightily enhanced. “Strange Conflict” is the redeemer, the big follow-up to the dirge of “The Great Santur” and might be the most satisfying doom-builder on the record as a whole. There lies some of the finest drumming on the record, there flings a stellar set of leads, and all warps as one when the pure magick bridge of the song carries ’em away. Side B becomes a great send-off from the psychopomp, a wave of fleshless fingers as we reach our destination. Ending with such a dynamic piece puts into perspective all that the trio are capable of in the span of ~45 minutes, going above and beyond without sounding labored or self-conscious. It helps a great deal that all pieces are held together by the incredibly consisted production value applied to all of their releases where the assumption is that Harju Studios was once again employed with the capture and honing of Cardinals Folly‘s latest sounds, as has been tradition since their beginning. The ear for control of bass frequencies is an exquisite luxury for the average underground doom metal record and lends some extra power and voice to the guitar tone during both frantic and sustained modes alike.

Having picked the corpse down to its bones, arranged them by size, and made a neat little hat from its almost dried scalp I’m comfortable giving a very high recommendation for ‘Defying the Righteous Way’. What lingers unanswered in this crypt is ultimately how it compares with ‘Deranged Pagan Sons’ and lets us place their bodies shoulder to shoulder and see them as the brothers they are: Two equally twisted minds and the exact same genetics that’d expressed into different but equally defiant forms. Cardinals Folly have maintained peak momentum for yet another album and it is a marvelous, joy inducing feat of sorrowful heavy metal that I’d count among the most substantial doom records immortalized in the first part of 2020. 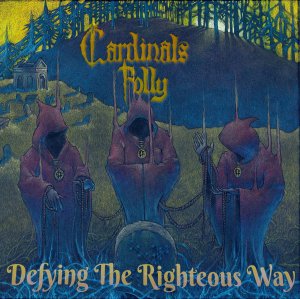