Is there any true wonder left to feign at the sight of a gasping man, risen too suddenly with youthful ambition toward the thin air’d peak of his epiphany? Work builds the lungs and the muscles with strength enough to adapt but what of the mind or, the physical head? A psychedelic blurring of the eyes amidst bursting capillaries and maddening dehydration isn’t such a drag if peace and sacred solitude is earned, appreciated, and ultimately abandoned for the next climb. Though the journey verges on fatalist severity or, perhaps dharmic enlightenment, ‘Monte Verità’ represents just one peak atop many previously unforeseen waves — A perpetual being built by the greater force of a mind’s renaissance. Cénotaphe set the stage upon retreat and ascension, stepping away from feckless mutiny of community toward isolated perspective upon high. Seated there it is ‘truth’ that fills the ears like clicking beetles, the lungs like arsine, the eyes like the glare of the sun, and ultimately the mind yearns for the milling teeth of the maw below despite how diminishing any form of inclusion will inevitably be. What tethers the Norman souls of Cénotaphe to the land they walk must include the people, no matter how wretched some may appear from a bird’s eye view; So breaks away the inconsolable individual from their first climb, back down into mourning for a first glimpse of transcendence.

As much as I’d like to draw a straight line from axis to apex, all things are related but not so chained in eternal throes. So, to explain the meteoric lilt of this French black metal band from past storms ’til today the impulse was to suggest Cénotaphe conceptually extended from both member’s involvement in Nécropole‘s demos several years ago but this doesn’t hold up, despite my insistence back in 2019 for a review of the band’s breakthrough moment (‘Empyrée‘, 2019). Digging further backwards in time might suggest Angmar is where their core ethos was forged but the love of the early 90’s classics that drove that band is better linked to the Bathory-esque style of Norman Shores and realistically translates to any/all work beyond that point. The biggest picture reveals musician Fog and co-conspirator vocalist Khasgott (Frozen Graves, Ördög) aligned by atmospheric and melodic black metal goals that not only align with the great power of French black metal histoire but aim for the resonance of indisputable classics. Despite the wildly prolific works of Fog this last decade there is no perfectly clear precursor angle in the development of Cénotaphe although some influences are lucid enough. Instead the duo’s style is most often set somewhere between the lovely melodious hum of Forteresse and the rapturous hissing beauty of Seigneur Voland, melodic and austere black metal presented raw with celestially-attuned atmospherics applied.

‘Empyrée’ was such an exquisite mark for my own tastes, setting a high bar for songwriting quality and inspired melodic composition. Though expectations of style were never emphasized in my mind going forward, their identity was already quite clear at that point and it was dependent on the powerful ‘feeling’ their music has expressed (and doubly built upon) since their first demo (‘La Lurve Exulte‘, 2016). I suppose the only true expectation I have of Cénotaphe is some measure of intense melodic value applied; With that first major point of personal criteria in mind ‘Monte Verità’ excels beyond the bounds of the band’s previous material without overshadowing the consistent nature of their sound. At high volumes Fog‘s drum kit maintains a cavernous presence, not distant but deeply pounded as if echoing in all directions. This violently paced hammerer is accentuated by the functional presence of the bass guitar, attuned to the drum performance and very rarely contributing flourish beyond the slower atmospheric sections. It often feels as if the powerful striking of the rhythm section persists for the sake of containing the melodic oceans of guitar expressed throughout while figuring the best way to serve Khaosgott‘s increasingly complex and expressive vocal performances, which now occasionally reach into pagan black metal territory when certain songs demand harmony, such as stunning highlight “De mon promontoire astral”. The render, placement and general sound design are a major highlight of the experience only because they emphasize the charismatic performances of a band afire with purpose.

Gaze at the night’s sky with thrilled heart beating its blood in response, flowing downstream from the gasping wounded who’d fallen upon a frozen rock and hastened unto death, marveling at the cosmos in those final moments. No prominent amount of keyboard accompaniment features amidst the flow of ‘Monte Verità’, at least not to the degree of ‘Empyrée’, though those cosmically sourced synths and otherwordly slivers of light do feature at key points within the tracklist. The exodus of Side A within the aforementioned “De mon promontoire astral” as well as the pivotal fire of “Ne m’oubliez” on Side B provide a sense of wonder, subtly implying elevation with small-but-impactful touches of atmosphere. “Myosis” opens the album with those layers laced integrally into each detailed movement, while the major focus of the song is shared between the two major draws that persist within all Cénotaphe material: Austere melodic black metal guitar movements and Khaosgott‘s equally inspired vocal work, these elements are ‘like’ other notable acts in France, Finland, and Québec but Cénotaphe have their own “it”… An alluring flair for the dramatic that is grand but still naturalistic, still deeply personal and ‘underground’. If nothing else each melodic idea completes with a point made, melodies round themselves and no moment is wasted for the sake of filling air or stumbling away. Any artist who can recognize their own best ideas and arrange them in meaningful ways, empowering them with artful placement, is due some substantial credit for rising above the shoulders of the thoughtless many.

My bar for melodic black metal is forever set to ‘Far Away From the Sun’, attaining a textural balance that is unreal while equaling it with compositions that stun and inspire on such a level is equal to perfection in my mind. I’d say Cénotaphe reached that summit on ‘Empyrée’ without surpassing the implied high standard, and they’ve reinforced that stature with ‘Monte Verità’. I am obsessed with it, anyhow. To be interrupted by anything else whenever it plays feels like a cruel slap from the sky into darkness — There is some primal liberation in these rhythms, a drowse upon the eyelids and speed sent to the heart. I’d sit breathless until the short ebb out of Side A would allow a gasp, on the edge of its cliff with my solitary spirit torn as roots from soil and careening through the skies of Helios’ summer rays; This despite the plague-stricken winter surroundings of the moment. Reaching the finale of the full listen, “Emersion”, feels infinitely rewarding in particular. Is it escapism or solidarité? The result is the same, engrossing as it is enriching for one and all, Cénotaphe remain an inspiring presence. A very high recommendation is due, primarily for fans of blended atmospheric and melodic black metal ideals. 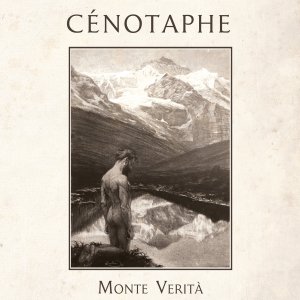