For many of the earliest death/doom progenitors ‘doom’ was a descriptor of what threshold of pace they’d dare to cross rather than a fixation on traditional doom metal song structures. If anything it’d been birthed by teenagers slowly figuring through the rhythms of Hellhammer and Venom songs and soon realizing they sounded pretty cool even slower, and a bit downtuned. No doubt Dream Death had it right first (‘Dream Death‘, 1986), but they were thrashers compared to the filth of Goatlord (‘Demo ’87‘, 1987), and the slow-chugged rehearsals from Nightmare Visions (‘Prophecy‘, 1987) and Salem‘s hour-long second tape (‘Destruction ‘Til Death‘, 1987). The real shit, the real doom riffs and some of the most important death metal innovation that’d lead to the sub-genre proper sparked up in the Netherlands with Sempiternal Deathreign taking similar cues from extreme metal’s birth (‘Rehearsal‘, 1987) with Delirium, Asphyx, and a lesser known group Beyond Belief who wouldn’t start putting out tapes until the early 90’s when death/doom metal was widespread and leagues more varied than a few years previous. Why the long ass history lesson? Two of the aforementioned progenitors feature in this (well, originally) studio project, Beast of Revelation, spearheaded by guitarist A.J. Van Drenth (Beyond Belief) and Throne (see: ‘The Full Moon Sessions‘) bandmate Bob Bagchus (Asphyx, Soulburn, Hellehond, etc.) with none other than John McEntee (Incantation, Funerus) on vocals. Big names across the board and each contributor a musician who’d more than proven themselves as class acts by at least ’93 but, do they still have it when it comes to death/doom? Yep, yeah this album is great, in fact ‘The Ancient Ritual of Death’ delivers more than enough on the expectation of quality that’d follow these artists.

You’ll have to slog through at least one more mid-sized paragraph of a history lesson getting there, though, because I doubt most folks are hip to the genius of Beyond Belief which I’d referred to when covering Dead Head‘s early discography on last years set of death/thrash features. Between their demos and two full-lengths Beyond Belief pushed a different set of limits and notably bent death/doom towards a literal blend of sub-genres, placing riffs worthy of a doom metal purist into death metal songs with often impossibly bleak lyrical themes on ‘Towards the Diabolical Experiment‘ (1993). If you don’t have time for any extra provenance you’re missing out on some real classics between this album and the Throne demos, both of which hold some precursor DNA to what Beast of Revelation are doing on ‘The Ancient Ritual of Death’. I’m sure the old school death/doom folks are clicking away madly taking notes but for everyone else the promise of John McEntee on any record means he’s putting his all into the performance and that should be enough to just buy the fuckin’ thing outright. It is a gory, bellowing, snarling affair and I couldn’t be more impressed with the personality the man brings to a record that could’ve brought just about anyone in and still been just fine.

From the first few bars of “Legion” they’ve already got it in the bag, a big screaming doom metal riff crushed out beneath McEntee‘s growls. I guess I’m easy in that sense but the quality of the record certainly keeps up from that launching point. I figure most folks are going to want to reach for Funerus‘ ‘Reduced to Sludge‘ to see if this is as similar as they remember, it isn’t beyond the vocal tone and maybe the slower title track. If anything this is even slower, the kind of record you can’t at all skim through to find a riff because it just digs in and slowly hammers away for the duration. Much of ‘The Ancient Ritual of Death’ swings for a similar pacing with doom metal influenced compositions that I’d compare with Cathedral‘s ‘In Memorium‘ demo, utter slow-motion but letting both the vocalist and the riff find an actual doom metal tune along the way; “The Great Tribulation” speaks to these points immediately in the early dawn of the tracklist. I’d like to continue to overstate the ‘old school’ modus here ’til I’m blue in the face but it is more important to emphasize the idea that what made Beyond Belief particularly interesting back in the day continues to shine through Van Drenth‘s riffs here today. I’d found that association satisfying as a longtime fan.

If you’d sat through each of those old late 80’s demos I’d mentioned earlier, the staggered chugging that hits about a minute and a half into “The Fallen Ones” should reignite the spirit of those old tapes, hitting upon the ‘Hellhammer at half-speed’ rip a la Cianide for long enough to expose the aforementioned auld lineage of the artform. This ends up being one of the best songs on the record, not for that moment but for the sorrow it held once I was able to get over my initial death/doom geek-out and just enjoy the record for what it is. I’d love to see more leads like the ones that chime in near the end of the song, before the final refrain. See if you can figure out which leads on the record are from guests Eric Daniels (Asphyx, Soulburn) and Robbie Woning (Dead Head, Beyond Belief). “The Days of Vengeance” introduces Side B with as much vigor as “Legions” before it, punctuating the shift between halves and hitting a bit harder if you’re as prone to taking forever to flip an LP as I often am. This song is quite different beyond its extended opening fanfare, breaking into one of few ‘faster’ sections on the album in its last minute, the drums don’t speed up but the guitars do and I’d always really loved this moment, anticipating the song because of it whenever returning to the album.

The leads on “The Unholy Roman Empire” and the placement of the song on the tracklist reminded me heavily of the title track off of ‘Lost Paradise’. Not literally but in tone and placement more than anything, still effective in the same way. It’d be the highlight from the album that’d tip the scales towards Beast of Revelation‘s debut being more than ‘just another’ death/doom record, of which there have been a serious glut of thus far in 2020. ‘The Ancient Ritual of Death’ doesn’t just feel like a set of seasoned pros putting out a side project but it begins to sound like a band that’ve been around forever once it all sinks in. This probably speaks to Van Drenth‘s strong songwriting ability as much as it does the talent of the very active performers involved, it is a fantastic and very professional record that doesn’t waste anyone’s ear time with lazy filler or throwaway tracks. The only element holding back a deeper connection with the piece comes from finding a persistent theme or greater conceptual thought that ties everything together, but I can chalk that up to my own ineptitude not having asked for a lyric sheet or pressed my ear too close to the words. As is, a fantastic death/doom record that lives up to the line-up sheet and a high recommendation for this debut. 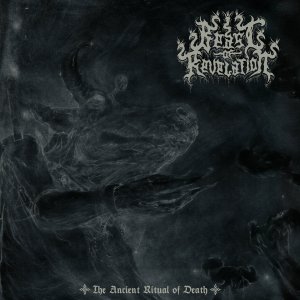