It is a great honor that I may unveil an early full album stream for the third cosmic gift of ‘Gravity‘ from Swedish psychedelic doom metal band Saturnalia Temple. Within its depths conjured is the screaming spirit of doom metal’s birth by way of the psychedelic existential dread of 70’s heavy rock, invoked through decades-wisened ritualistic occult movements. A stunning deployment of vintage recording equipment, effects and instruments married to a gritty dark ambiance entirely their own — A new point of stellarly transcendence achieved within this fine album. The result is a bare, ancient and honest meditation upon the island of man, a celebration of the independent adaptive ‘self’ and the lifelong intent of the true individual to reach their full potential. I cannot stress enough that one listen will not suffice, you must immerse within its profound dharma of self-liberation for the full effect — Through the peace and wrath of its dark psychedelic analog-echoed n’ doomed strokes a profound meditation is possible.

Per the full review: “The eponymous opening track, “Saturnalia Temple”, carries itself with such weight and barenaked purpose that it’d been the harshest, most jarring induction I’ve experienced so far this year — A hot iron set into a frozen pitcher. The analog sound cakes itself with the gristle of 70’s guitar and vocal effects providing practical but unpredictable swirling doom-psych that arrives with a freshly characteristic frankness and depth. Those fuzz-distorted sparks and woven echoing modulations so readily shake like a fist in the face that it’d felt ill-advised upon the first listen. With the proverbial hymen of the mind-ear connection distended, it would be second listen where the envelope of Saturnalia Temple‘s third album would shake loose its content and meaning more readily. The flawless self-representation across the span of the first four tracks peaks with the combination of organ-grinder “Gravity” and the blackened growling ritual of “Elyzian Fields”. This heavier, crunchy side of the band is not unheard of if you’re familiar with their discography but this time around it feels more present and less in line with the motions of stoner metallic ‘heavy blues’. “Elyzian Fields” in particular reaches for an abrasive, crushing sound that leaps and stabs at the ear, it’d soon become an unmissable point of intensity upon the full listen.“

CD GIVEAWAY/CONTEST: If you would like to win a CD copy of Saturnalia Temple‘s ‘Gravity’ provided by the fine folks at Listenable Records send an e-mail to grizzlybutts@hotmail.com with the title “Saturnalia Temple Gravity”. A winner will be chosen at random and a follow-up e-mail will be sent to the winner for a mailing address. 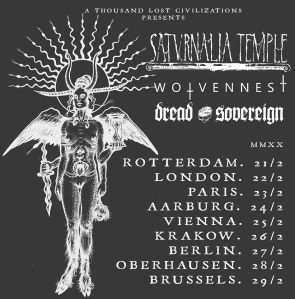