The potent sting of early 90’s Swedish melodic death metal and the all-too-serious dark reputation of the second wave black metal phenomenon adjacent are too often seen as separate acts. In fact they developed in a loose tandem structure, often just a door away within the same rehearsal communes. Romantic as the notion of struggling basement bands trudging through the snow, burning down churches and raising hell might be, the reality really is a bunch of wiener suburban kids and young men spending their winters indoors out-darkening each other within mildly competitive circles. I say this with the utmost respect, and there were certainly ‘hard’ characters that’d develop within the crowds of trend and serious enlightenment, but the names that live on today hold weight for their universal appeal and no longer for the dangerous or esoteric personalities that created them. None are divined and replicated more often than Dissection, a teenaged death metal band that’d later discover a marriage of neoclassically inspired compositions and black metal guitar techniques that continue to inspire through the several generations resultant.

If it were somehow divorced from the worldwide influence of bands like At The Gates, the reach of the black metal influenced variant of melodic death metal would reach three key locations worldwide by the mid-90’s with lasting and traceable results: The Midwest United States death metal scenes, Finland’s greater melodic metal development, and undoubtedly Germany’s less avant-garde side of the river. Through several generations a trickle-down effect would find each region host to potent and still-thriving traditions of ‘true’ melodic black metal, not that silly mislabeled symphonic clown metal but the kind of stuff that No Fashion Records was putting out in the early 90’s. Saarbrücken-based melodic black/death metal band The Spirit probably don’t intentionally carry the torch for the German style of traditional melodic black metal but they’ve resembled it marvelously on each of their two full-lengths thus far. ‘Cosmic Terror’ certainly employs the techniques and scope of many of the greatest bands in the greater Swedish and German pantheon of the sub-genre and promises an infinitely listenable experience even if by proxy of nostalgia or, the enduring power of the artform.

Having had some constructive station within the somewhat underrated Dethroned and Agathodaimon between them, The Spirit formed as a duo in 2015 only to expand and contract toward the current trio formation today on ‘Cosmic Terror’. Their debut full-length (‘Sounds From the Vortex‘, 2017) was a classic statement, a warming of the old breathy continence of melodic black/death metal where it’d begun in the hands of Dawn, Dissection, Sarcasm, and Sacramentum before the style would develop into more outwardly commercial enterprise. As often as folks wanted to compare this first record with modern atmospheric/melodic bands such as Uada or Mgła it was absolutely rooted in place by a clear resemblance of later Dissection both for the guitar compositions and the stabs into classic melodic death metal structures. That self-released record would capture enough buzz that it’d get picked up for a re-release run with Nuclear Blast, instantly lifting the station of the band and allowing this second album to be even more ambitious.

But let’s not get carried away here, even if The Spirit are largely doing their own thing in terms of their urgently melodic themes the reason most black metal fans will flock to them like starving rats is for the fact that they’re absolutely nailing the impactful presence of classic Dissection by way of classicist compositions that are actually worthy of that sound. They are by no means a copy, a clone, or a direct imitation but you may get the same feeling from the experience on a superficial level — Nothing is exactly as you remember it, especially if the classics aren’t fresh in mind. This time around I’d actually say guitarist/vocalist M.T. has achieved a record much closer to Dawn‘s ‘Slaughtersun (Crown of the Triarchy)‘ albeit a more succinct vision with only a hint of the rockish 80’s metal flair that’d made records like ‘The Somberlain’ special beyond its violently streaming attack. The only point where I cock an eyebrow comes with “Repugnant Human Scum” which kicks off very much in the spirit of ‘Reinkaos’, albeit more subdued.

“Pillars of Doom” is a major peak within the core of the record for my own tastes as the guitar work swings towards a more melancholic sensitivity reminiscent of the first A Canorous Quintet record. If you were to posit that a record like this is very much a tour of very old favorites in the mind of an idiot such as myself, sure, as I’d suggested nostalgia blurs my perception in some sense. It is rare enough that a ‘modern’ band comes close to understanding the magic of those old records and that is reason enough to celebrate but ‘Cosmic Terror’ shows well enough that The Spirit aren’t merely capable of this brand of melodic black/death metal but that they’re actually quite skilled at making good music of it. The proof is largely in the riffs and their memorable melodic forcefulness. I don’t personally feel like this record is an imitation but perhaps a modern approximation developed into its own personal vision beyond worship. The best example of this comes with “The Wide Emptiness” where contrasting melodies cross the eyes a bit as they approach the mid-point, I think this might be the strongest path forward for the band if they’re looking to evolve through increasing complexity.

‘Cosmic Terror’ was a record I needed a few extra weeks with out of sheer greed, not wanting to bluster through it like a hog in a garden. The experience didn’t necessarily evolve in my mind beyond a certain point, though, as The Spirit play a form of melodic extreme metal I have worshiped and adored since the late 90’s. Is it a modern day classic? No, I wouldn’t say this is the one to beat in that sense just yet but this band is on that trajectory — I do not at all doubt they have it in them; The challenge will be evolving those notable forms without losing the fiery plot. Taken as is, ‘Cosmic Terror’ is a fantastic melodic black/death metal record in the spirit of the early-to-mid-90’s, capable of the same glorious entrancement felt upon firing up the classics of the sub-genre. As such, it comes with a moderately high recommendation. 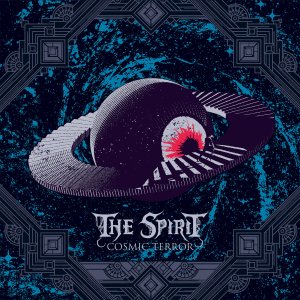