Though they were young and might’ve felt naively misguided by their own tastes during their most formative years, Faustian Pact were admirably developed between 2007 and 2010. The three demo tapes produced by the Finnish black metal act during this time would find the project in transit from a mild and typical dark/black metal sound towards a quickly stabilizing ‘melodic’ black metal style on tape number three (‘Tarinoita Kolmannentoista Kehän Poluilta‘, 2010) where the vision would clarify and a meaningful melodic voice would halfway appear in the hands of these Mikkeli-based musicians. A ten year gap persisted before rumblings of a debut full-length would randomly surface in mid-to-late 2019 as session keyboardist V-Khaoz (Vargrav, Druadan Forest) gave mention of his involvement nearby the height of hype for his own ‘Reign in Supreme Darkness’. With the potential for any and every niche to blossom in today’s equalized and passionate extreme metal underground now is absolutely the right time for Faustian Pact‘s archaically melodic and sparkly-eyed symphony of high fantasy black metal to reappear. So arises the cloud-soaring, folkish majesty of ‘Outojen Tornien Varjoissa’, a debut that holds fast to some of those original melodic breakthroughs back in 2010 while allowing some modern sensibilities to creep into their ‘ten years too late… back in 2007’ sound.

When faced with a mid-to-late 90’s sounding black metal album with heavy use of melodic keyboards the tendency today is to associate that sound with bands like Emperor and Limbonic Art without taking a closer look at how keyboards/synths are actually used. You could maybe hear shades of ‘Epitome of Illisions’ or Odium‘s debut in this work but that’d be too much of a generalization and overlook the very different themes and atmospheric values employed. Faustian Pact do carry some of the reglia of ‘Lunar Poetry’-era Nokturnal Mortum alongside a more prominent nudge of early Summoning and if you’re superficially familiar with labelmates Förgjord there exists some of that same spirit driving this release. When these Finns are really getting into it and the keyboards are firing on all cylinders I’d rather compare this to Shambless‘ last two full-lengths for their similar use of melodic guidance and distinctly high fantasy driven keyboard sounds.

At peak familiarity, around 5-6 full listens, it becomes apparent that the musicians involved have come into their own in terms of ‘living and realistic’ production values that allow Faustian Dawn‘s expansive fantasy adornment to keep the greater storytelling moving along with strong purpose. Or, more importantly they’ve become far more accomplished songwriters with some certain aptitude for choruses, bombast, and a niche-specific ‘classic’ sound. The most clear measure of artistic growth comes with two tracks (“Myytti Am’Khollenin Kuninkaasta” and “Askeesikuun luolissa”) which were written back in 2009 and featured on the aforementioned third demo from the original line-up. This forces the conversation towards the symphonic nature of Faustian Pact in 2020, which is the most notable change beyond their original forms.

Keyboard work from V-Khaoz is therefore vital here in terms of pulling the recording back to the era of the bounding second renaissance of viking metal, folk metal’s Scandinavian mega-blossoming catchiness in the early 2000’s, and most clearly the earlier non-commercialized keyboard driven late second wave black metal of the mid-90’s. Don’t mistake it for the honking and blustering fuss of pop-metal in the late 90’s, this is not symphonic in that godawful sense. The arrangements do not feature as Wagnerian accompaniment, honking as an affront to the guitars, but instead accentuate the album with fantasy atmospherics and charming melodic guidance. Less Dimmu Borgir and more early Thyrfing, for lack of a more specific comparison. I’m not clear if V-Khaoz orchestrated these parts as they were rendered between 2017-2019 or if he simply put his spin on them but, those keyboards are vital for the greater characterization of this resurrection of Faustian Pact.

With gratitude for the long era of work leading to the realization of this project and its ancient niche sounds, the high-fantasy sprawl of ‘Outojen Tornien Varjoissa’ does beg for some further iteration and refinement. The balance struck begs for more thoughtful, melody conscious (or perhaps forcefully blustering) vocals and even bigger soundscapes; I can see songs even more immersive than standout “Rauniopuhetta” suggested on the horizon if Faustian Pact do find a way to oil the machine into gear without hesitation. I’d also like to see even more of vocalist Octus‘ artwork, as his piece for the cover is stunningly dark and inviting. Beyond that small wishlist, I’d definitely hit a point of disgust early on in the listening experience were I’d felt some awful nostalgia for the era of bands like Cradle of Filth. So, on a superficial level, I’d understand why taking a deeper look at a record in this style isn’t something certain folks would stomach. As I’d said before it isn’t that brand of pop-metal nor is ‘Outojen Tornien Varjoissa’ too deadly serious beyond the Tolkien-esque fantasy world it details. So there shouldn’t be any major repulsion experienced when given a chance. Faustian Pact‘s long trip towards this debut is a path well-fought and the middle portion of the full listen will ‘show their work’ in terms of expressing where the years of contemplation paid off. Although I am not sure how long it’ll stick with me if I don’t force the issue and keep it in rotation, it is a fine work. A moderately high recommendation. 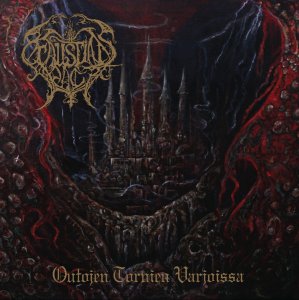