Bursting at the mouth with a flamethrower’s worth of gasoline the escapism and unrest of the 1960’s didn’t simply fade into the next decade, it’d been a brutally spewed firestorm through the veil — Afire with the reality of the inhumanity afforded the third world, the overwhelmed senses of many self-centered ‘free’ and first-world nations around the globe could no longer be repressed. With the truths of war and inequality in plain sight, however blurry the screen, a new reality quickly separated the empathetic from the diabolical. A newly focused age of harder drugs, better sex, and a free(er) distribution of global information would bring the injustices of a silently warring world into protest and well, sublime musical and artistic inspiration. In many ways the greater creative goals of Norwegian progressive heavy psychedelic rock band Hex A.D. echo the progression of that age of Aquarius, of perpetual wonder beyond slow-growing spheres amidst newly binding connections with the outside world. Their tripped-out ‘kinda metal definitely hard rock’ psychedelia deals very much with a pre-’75 ethos, stepping beyond good ol’ drugs and rock n’ roll towards freedom, science fiction, and a timeless examination mankind’s hunger for war. The fourth full-length album from the band, ‘Astro Tongue in the Electric Garden’, pulls back on the Sabbathian lunges of their last couple records and instead calls upon a lighter vintage, no less stunningly dramatic and intricate but doubly grand in its intent to mystify beyond the olden doors to perception.

The sense that life and innocence is passing by too quickly for generations raised within, and unceremoniously ripped out of, their comfortably bubbled suburbs serves as raw power for the bulk of the most effective 70’s progressive rock in bursts, particularly those bands laced with psychedelic escapism and grass-hounding, rocking back-and-forth in the corner LSD trippers. I’d love it if that brittle consciousness was entirely the focus of ‘Astro Tongue in the Electric Garden’ for the sake of retro-reversion but Hex A.D. are still well powered by the ‘stronger lookin’ back’ punches of Cathedral or Spiritual Beggars, letting loose some of that punchier ’83 NWOBHM athleticism while enjoying the fidelity of their 90’s spanning station. These Norwegians’ heavy blues rock presence is far too heavy to place prior to or within the 90’s yet, the songwriting itself slides fully back towards the most classic theatricality of Rainbow or the brassy freethinking jogs of post-occult era Demon thanks to a heavy use of keyboards as a major driver. The keys are a huge part of the action for my own tastes, I sure as hell grew up loving Cathedral and seeing that band evolve into the peak of ‘The Guessing Game’ primed me for the tonality and artistic vision of Hex A.D., you can at least see the inspiration even if these Norwegians have found their own way using a similarly vintage font of inspiration.

It bears mention that this may very well be the first record that fully finds vocalist/guitarist Rick Hagan (ex-Absolute Steel) without the collaboration or consult of well-loved super producer Chris Tsangarides who’d been an integral part of Hex A.D. since 2011 ’til his passing in 2018. I think they’d really hit the right balance and fidelity on their third album (‘Netherworld ­Triumphant‘, 2018) though it’d been aimed at early 80’s doom/hard rock by a larger margin. ‘Astro Tongue in the Electric Garden’ shows some sharp adaptability on the part of Hagan as he continues to produce, perform and compose Hex A.D.‘s output; As far as I can tell he’s switched from singing drummer to frontman/guitarist since the previous record though Hagan has performed the entirety of recordings himself in the past. Perhaps the bigger point to make is that previous Hex A.D. records were all about the riff and the hook whereas this fourth album really sinks into melody and a wide variety of sounds to keep things flowing for the full ~50 minute run (including the bonus track.)

In keeping with the traditions of heavy psych of the first half of the 70’s there are two very distinct sides to this record, each with a theme and purpose that not only serve to characterize the band but create a full and rich listening experience. Side A contains the hooks, the motivation to connect with those big arena rocked riffs, classic melodies, and swirling keyboard/organ/mellotron action. This is where I’d felt the sense of the 60’s was most nurtured and studied, sure the songs are as crunchy as 70’s Priest along the way (see: “The Day the Sky Exploded”) but the lyrics and mood come in the spirit of protest and wonder, in delight of new freedoms and fearsome frontiers. Think of Uriah Heep‘s ‘Demons and Wizards’ if echoed through the throat of ‘The Garden of Unearthly Delights’ era Cathedral. Side B carries the title “The Monsoon Suite” and features three extended and ambitious songs that could be fairly labeled progressive. “Hawks & Doves” brings on the mellotron alongside a few notable guests including vocalist Eirikur Hauksson (Artch, Ken Hensly) and guitarist Thomas Tofthagen (ex-Paul DiAnno, Audrey Horne) who help bring a newly-defining showpiece for Hex A.D.‘s focus on heavier, proggier, bluesier happenings rather than the psychedelic doom metal of past efforts. For my own taste the swaggering build-and-release of the guitar/organ interplay on “Old Bones” is the big jam on Side B, it might be a deep cut for most but I’d come back to the roaring flood of the second half just for that song on several occasions.

The CD and digital versions of ‘Astro Tongue in the Electric Garden’ feature a bonus track you’re going to want to hear if you’re a fan of Dio‘s ‘Lock Up the Wolves’ album as guitarist Rowan Robertson provides his talents for “Grace & Pain”. It gives a nudge back to the 80’s intent of ‘Netherworld Triumphant’ and builds into full on stomping n’ wailing heavy metal song compared to the rest of this record. It is nice to get a third dimension out of the band on this already change-heavy bout of progressive ambition from Hex A.D. and I can appreciate just how much they’re capable of expressing in just under an hour. I’d definitely found myself with fewer gripes in terms of arrangements and the overall tracklist this time around. I wasn’t sure what to think when “Astro Tongue” hit as a single and I’d still say the two songs surrounding it are more catchy; With that said the emphasis was surely for the showcase of stylistic movement, a change of pace readily on display and it smartly set the tone for the full listen. It’d be the menacing psychedelic doom rock of “Deadly Nightshade” pulled me right back to discovering ‘The Carnival Bizarre’ back in the early 90’s and that sensation is so rare that I’d latched onto ‘Astro Tongue in the Electric Garden’ quickly and easily. An emphasis on memorable and ornate rock songs over retreading classic stoner/doom riff metal offers a righteous trade I’m all for and as such the time spent with this run around the block from Hex A.D. was invigorating, affirming, enriching to say the least. Undoubtedly a high recommendation on my end. 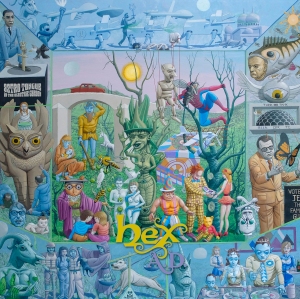