An emphasis on the illusion of collective artistic “progress” is a sign of desperation from a sated void, an emphasis on regression signifies an overbaked ecosystem. It was dangerous, disaffected, grief-stricken, and sublimely delusional teenagers not barbarians (or witless cavemen) who’d created death metal seemingly out of thin air in the early 80’s, long before the sub-genre had been dicked into box by a name and a woeful set of ‘normie’ parameters. Having spent the last year digging up historical examples of thrashers embracing the death metal movement early on I’d found most every band allowed some glimpse of a hard life be it mental illness, poverty, hard drugs, or whatever series of unfortunate events. None of it matters as time and revisionist history kills them all off, it is a triumphant and sorrowful fate that the riffs are what’d survive beyond cash-ins, opportunistic retellings, and nostalgic wax. Today the major takeaway on offer for younger bands is that re-striking the primeval iron of extreme metal origins isn’t a matter of ‘dumbing down’ or slopping it up. Eighties death metal always hinged on attitude, murderous attack and tightly arranged guitar riffs that overwhelm the limbic system to the point of bursting. Oakland, California quartet Hallucinator know their shit and have gotten it right after a six year tumble towards realization — Never plainly imitating while sourcing their thunder directly from the bulge of death, black and extreme thrash in the second half of the 80’s. Their debut full-length ‘Another Cruel Dimension’ is a full fledged hill-scorching echo of blackened nuclear death, sadistically charged enough to rip through even the most jaded death-thrasher’s skull and get their legs kicking out from under ’em.

Without dwelling to hard on the pun, Hallucinator are a trip… or their first album represents a meaningfully arranged world tour kicked off in the hardcore-sped Bay Area shred of Insanity, Sadus and Possessed up through northern Europe (Bathory, Merciless) barely scratching the back of the Teutons before raining hell down upon the polluted shores of New Jersey on through the mystic swamps of Florida where it ends. They’re not as brutal and precise as some of those nods might suggest but the fact that they slipped in a R.A.V.A.G.E. cover towards the end and made it work is a small testament to the versatility of Hallucinator‘s 80’s death metal inspired sound thanks to a prime cohabitation between the early days of extremist thrash and black metal. By the time “Chapel Perilous” lets out its last bellowing snarls the appeal of what these guys have put together should be clear enough.

Although I’d like to pick through some key moments on the full listen there are two key observations of ‘Another Cruel Dimension’ that should be somewhat universal for the seasoned death/thrash fan: First, the echoing reverberations of vocalist/guitarist Eric Stucke send a notable shock of witching metal and first wave black metal through the full listen, icing the veins of Hallucinator more than the typical death/thrash focused band. The effect lends an obscurity and urgency to ‘Another Cruel Dimension’ and comes close to distracting from the guitar work on initial listens. Second, this is more than just a riff album and I’d go as far as to say it won’t cut into familiar territory the same way the typical ‘modern revisionist’ Kreator or Demolition Hammer obsessed death/thrash band might. Staggering and roared punkish black metal ferocity speaks to the band being from Oakland but they’ve not dialed back the timeline so far that straight up crust ever threatens to stink up the vibe too much; “Pervader” comes close, likely a nod to Slaughter if nothing else.

‘Another Cruel Dimension’ is a record divided into two sides that feel somewhat compartmentalized while functioning to great effect as a whole. The main reason I’d suggest a clear division stems largely from the neon green horror synth that signals the beginning and end to the absolute violence of Side A. If I had to lay out some general terms I’d say Side A is ‘side Attack’ and Side B is ‘side Riffs’ and I might only be leaning that way because I’d gotten stuck on their version of “On They Slay” (and “Chapel Perilous”) for a few hours each during initial listening sessions. It was Side B that pulled me away from my initial observation that Hallucinator sounded like a black/thrash band making death/thrash without the brutality; The brutality is there, just not achieved through overtly technical riffing or any particularly pronounced use of double bass drumming.

The duo of “Alcoholic Possession” and “Hiss in the Skull” offer the clinching moment that’ll convince most folks to involve themselves with the full listen here. These are classic thrash songs sped up and hammered out alongside a guiding lead not far from the horrors of demo-era Pestilence, Death Strike, and the tormented bounding speed metal of Insanity. That isn’t to say that Hallucinator don’t have their own bold personality but it only comes when things turn psychedelic, loopy, or jaggedly brutal. If anything it is the outliers that define the band’s musical personality at present, although their personal spheres of interest come to make their statement a little bit late in the run of the album between the nicely done horror synth interludes and the whole of “Ruthless Transgression”. It isn’t the first roller coaster to sling into on ‘Another Cruel Dimension’ but it will make it clear that for all of their love of 80’s death metal insanity Hallucinator are reaching for their own brand of ‘out there’ extremism and they show potential by going there with tuneful intent. I guess the hope is that they never clean up their act too much and avoid losing the vital energy that powers through these songs, making a ~44 minute album feel like a half hour race to the finish line.

As often as I’ll champion a debut record for its potential on display it is rare that the first product out the womb actually hits this sharply and sets itself up for plenty of future listening. Even if I can be an elitist asshole about the death/thrash authenticity of newer bands, Hallucinator have won me over by way of ‘showing their work’ in developing their own unholy cryptic psychedelic character. Can they do bigger and better things? Sure, but this time around I’m satisfied with the present level of expression in hand, it just rips. It’ll be the right stuff for folks who love the old dirty classics just as much as similar modern bands like (‘Nocturne of Eyes and Teeth’-era) Reveal, Slutvomit, and Sepulchral. Highly recommended. 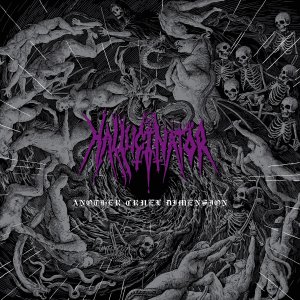