Actualization demands a previously clouded mirror of some sort, a smearable or scraped-away misconception to inspire its reflective properties. With any philosophical intent the unsheathing of personal reality requires much more than pure honesty but, to build upon a reconstruction of shattered past, to scour all previous actions of their actor, drain all previous events of their impact, and denature all decisions with a constructive method. What’d separate a primal being from the herd towards sentient knowing is a rare path beyond, particularly for the commercial artist; Adaptive individuation must eclipse the past carefully without disconnection of the ‘self’ for fear of interrupting the instinctual draw of the consumer towards known patternation. Three circles of ‘knowing’ are breached beneath Godthrymm on their debut full-length, ‘Reflections’, that grant instant gratification to the listener and express a certain expertise from the band — The melodic doom of northwest England in the early 90’s, the cathartic roar of modern doom metal mutations today, and a deepest layer of classic epic doom metal that sews it’s shaking late 80’s foot to todays soaring shadows. That said, it is by their own presence of mind, steady hand, and secure identity that ‘Reflections’ succeeds.

‘Reflections’ is somewhat easy to reduce down to one or two powerful associations at a glance as Godthrymm pull in the decades-long fandom of the post-death/doom renaissance by way of the “Peaceville three” melodic ‘gothic’ doom metal alongside the theatrical grind of classic ‘epic’ heavy/doom metal. Shaping those elements through modern revisionist ‘old school’ sensibilities initially feels retro compared to some similarly achieved projects but the ultimate suggestion is that these elements are vital to vocalist/guitarist Hamish Glencross‘ ideals and melodic experimentation developed through his years in My Dying Bride, Solstice, and Vallenfyre. Does Godthrymm manage to connect the heart to ear enough to avoid validating any obvious reductive classification? They’ve done it before, sure, but this is a differently sorrowful beast in Glencross‘ hands that echoes mid-90’s Paradise Lost as much as it does the core lessons from time in Solstice; Though it is fairly dramatic leap in fidelity and expression beyond their first EP (‘A Grand Reclamation‘, 2018), which I was somewhat over the moon for in hindsight, I was initially unsure if ‘Reflections’ wasn’t too plainly representative of certain classics. Either way, of course I did and continue to enjoy the album’s style.

The resumes on display for that first draft of Godthrymm‘s sound were the main event back in 2018 but today, as this slow-burning vision realizes throughout the 55 minute run of ‘Reflections’, it’d seem the guitar tone and vocal patterns are what echoes the old ways more than the actual style of the album, which I’d challenge a long-standing fan of Warning and/or My Dying Bride to not enjoy. It is important to persistently suggest that melodic death/doom does not necessarily apply here beyond some spirited references — The focus of ‘Reflections’ is set toward a modern epic doom metal style that appreciates in intensity through its funereal stasis rather than any beauty-and-the-beast dips into roaring death metal or gothic rock. More succinctly put, the traditional heavy/doom metal fan might find ‘Reflections’ sluggish but the hints of ‘Draconian Times’ throughout should be inspiring enough to find a common ground. The midpoint of opener “Monsters Lurk Herein” sets all that I’ve suggested thus far on the table, surpassing all expectations and threshing its way through what sounds like three decades of sorrowful doom influence in less than eight minutes. From there it begins to feel like my skull has cracked on a sidewalk, inflamed and bleeding at the pulse of a fading heartbeat ’til scooped up and revived near death.

“Among the Exalted” is the sort of song that could spark a few days extraneous listening in a tedious fellow such as myself, just for the sake of not blindly comparing it too closely to ‘Gothic’ or a certain My Dying Bride album I’d clearly missed in the 2000’s. The important point is not finding the deeper comparison or relevant pattern but that the song itself inspired me to revisit a brand of music in-depth that’d devastated and rebuilt me a hundred times as a teenager in the 90’s, at least before I’d skated off to funeral doom and such soon after. It doesn’t end up mattering if it is nepotism, nostalgia, or the songwriting itself that powers me through these rants of remembrance it is instead the worthy catalyst that reawakens that I’m thankful for. Also, yes, the songwriting is worthy in this case but that will not surprise anyone who’d enjoyed the somewhat livelier thrust of ‘A Grand Reclamation’. In fact “The Grand Reclamation” reworks the title track from Godthrymm‘s debut EP and shows the depth of work they’ve applied to their songwriting with great attention to fluidity in the final mix, making the original song sound like a demo take in hindsight.

“Cursed Are The Many” reawakens the ornate lead-driven hooks that’d kicked the album off and begins to gracefully bookend the full listen after an appreciably cathartic, taxing middle portion. As the longest piece on the album it begins to feel like the final meaningful apex until “Chasmic Sorrows” drags in with its final descent, an incredible fanfare of soaring leads unto dread. The nail(s) in the coffin, as it were. To reflect upon personal demons so deeply in song ends up having an alternately meditative and daunting effect where ‘Reflections’ may just be set aside ‘by prescription only’ for the sake of not inducing too-perpetual dread before it becomes an addictive capture of lucidity for the depressive. So, to answer the yet unanswered, yes the heart and the ear connect in some meaningful ways within the span of ‘Reflections’, unmercifully so. This desired effect expands and contracts within each listen, providing a dark abyss to squirm and gnash within before being lifted from drowning just enough to appreciate what depths you’ve been through. Received and analyzed on its own individual merits, Godthrymm‘s debut deserves nothing less than a high recommendation. 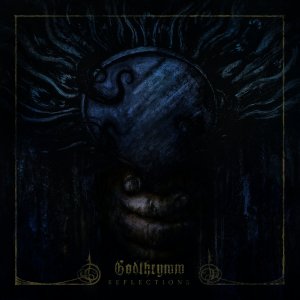