From the valley of armageddon sinks a vortex of black and graying sighs from the cart-pusher, his rig piled with angelic bodies twisted by blasphemous magic, in unholy ways. Bones thrust through wings, fingers crushed into fists and punched in great holes through shattered and loose pelvic floor; The dead are gnarled as if seared upon a great iron, toes curled by the fires of a most corrupt radiation. Limbs slip into the void, a separation of flesh and bone as they whirl downward to feed the ravenous portal. He inhales deeply upon the sweet salinity of grief, of warriors for ‘God’ mangled and strewn to bake into dust and fill the bellies of soon-deranged rats. The downward force warps the echos of a thousand crows into one great unwavering stream of laughter, sinister and with diabolic satisfaction. The spiral intensifies its window to the abyss, its stream upward amplifying the ear-catching sensation of a victory in the underworld, a distorted jazz pulsed and coughed into the dry air by way the infinite screams of the prisoners below. Rejoice in the aftermath of this conquering death magick of the abyss and set curious ear to the void that Israeli atmospheric death metal trio Venomous Skeleton conjure on their debut full-length, ‘Drowning in Circles’. A new unknown opens distinctly for seekers of the left hand path by way of well-known masters of the craft on this fine first strike — The eerie strokes of genius that await are unconscionably dark, irresponsibly sinister, and an uncanny thrill to behold.

When I suggest atmospheric death metal here in 2020 I’m not necessarily referring to caverncore, death/doom, or blackened death metal specifically but likely a crossing of many fiery paths indebted to black, death, doom with abysmal and merciless traditions in mind. Venomous Skeleton resemble the frantic whirling gnarl of groups like Temisto just as much as they strike into the lumbering heft of Necros Christos, conjuring the rapacity of blackened death metal and the towering mast of death/doom metal by way of a steady-blasting, mid-to-fast paced spiral of occult dread. The pace often swings between the churn of later Runemagick (or Drowned, even) and occasionally resembles some of Venomous Skeleton‘s previous/current projects such as Sonne Adam, Zad, and Kever. Right, the reason this album sounds so fuckin’ fantastic and professional is because the trio of fellowes involved in this circle of dread are well-proven professionals who’ve created some damned and incredibly dark music along the way. I would suggest that it isn’t important to focus on past projects, though, because this album has its own freshly spun atmospheric character.

In the past whenever a cohort might’ve described a death metal album as if it carried an ‘ease’ about it I’d have struggled with it, if only for the sake of wanting a brutal intensity implied before dynamic flow within the sub-genre. In the case of Venomous Skeleton the weaving flood of semi-distant atmospheric movement comes by way of an escalating series of blast sessions, not far from that second Stench album in practice. This is more readily noticeable as a first impression when firing up the project’s first demo ‘Arcane Chants of Death‘ (2016), where those drum patterns were developing their prominence. Tom Davidov‘s drumming on ‘Drowning in Circles’ offers a grand expansion of that first demo, upping the pressure-and-release dynamics of each piece as they strike between urgent sorcery and plummeting alchemical doom-strokes. The ease of movement and slip-stream of consciousness created between a thickly atmospheric production sound and riff heavy songwriting end up creating a dense experience that is easy to love but hard to remember without a few deeper listening sessions.

The more time I’d sit with ‘Drowning in Circles’ the sooner Venomous Skeleton‘s immersion shifted from suffocating downward spiral towards an upward emanating invocation of malevolence. The fog lifted from the listening experience by the fifth or so spin, and that might appear counter-intuitive to the earlier suggestion of ‘easy flow’ but when the more meticulous details begin to reveal themselves over several listens the amorphous movement of the trio’s patterns begin to shape into defined and powerful pieces. Although I’d missed a chance to include this album on my ‘Best of the Month’ feature for January, it is yet entirely deserving of high praise and recommendation. 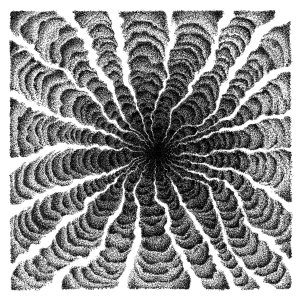