Parables of self-sacrifice by a willing and grateful following are in every case an ancient propaganda spread by the corrupt to ensure they remain in power. Self-appointed leadership bestowed with the gift of adept manipulation have been demanding, and receiving, their godhood without serious question since the innovation of subsistence farming created stupid, fat children off the richness of the land. The tyrant Toad King is no different than K’inich Janaab Pakal, Pope Alexander VI, Kha’afre, and countless other supposed godly appointees set atop a pile of death and corruption! Smoking dried goblin brains for the ‘greater good’? He does it to get high, miscreancy plain and simple. Who’d allow this to continue cares more for false traditions rewritten to reduce the value of our lives rather than for the future of their kin. Glazed over with his sagging green face and wilting crown of leaves, a cheeto-dusted toga reeking of dank goblin parts, the complacency of this pig-dog false king is all too obvious. I could write a hundred pages of reasons not to sacrifice yourself to be smoked by this fraudulent oppressor and deign to usurp him but, I see you’ve already pressed the dagger to your ignorant little throat…

Put something interesting and heavy out into the world with some spirited motion and you may just fill the void that our shrinking and burning terrarium desperately thirsts for. Case in point: Durham, England trio Goblinsmoker — A righteously heavy fuzz-barge of stoner doom metal set afire by the nuclear fission of hissing NOLA sludge metal violence that’d really just been kicked around for fun whilst Sludgelord Records was preparing to fire up their big guns. As it turns out the duo would manage their first EP (‘Toad King‘, 2018) around two years after warming the idea through and it went off with a blast, selling out and swinging big with a classic sludge metal snarl set to the gigantism of modern stoner/doom metal production. Fuckin’ doofy as it might be at a glance the conceptual depth of Goblinsmoker‘s planned trilogy of EP releases that began there retains some depth and conviction beyond any natural expectations. That said, I will not accept any explanation of the lore here that doesn’t involve the Toad King as anything but a tyrant, a faux-celestial amphibian maniac who’d use the bodies of fuckwit zealot Goblins to get high and assert his despicable regime.

The second EP of the lot ‘A Throne in Haze, a World Ablaze’ does a fine job of iterating on the general effect and sound of ‘Toad King’ before it, polishing up their intended atmospheric depth to greater meet the sustained goal of mixing Chernobyl-spawned doom/sludge tonality with chilling black metal influenced atmospheric dread. Moving away from the Eyehategod and Grief-esque bouts of snarling southern rock riffs, Goblinsmoker have opted for a slight rhythmic shift in the vein late 90’s Electric Wizard or Sleep, big grooves that never get too fast or fussy with their fuzz. Burlap thick punches of rhythm only occasionally storm up to a jog and when they do (the end of “Smoked in Darkness”) Goblinsmoker make it clear they’re not reinventing the stoner doom/sludge way of life, just delivering it with some brutal conviction. Two aspects stick out most beyond those emboldened riffs: The atmospheric layers that sing atop the fuzz to create ominous spacious value, and the improved bite of Andy Kennedy‘s vocals which rasp to the point of bursting veins more often than you’d expect from a toad fantasy sludge mini-epic.

Sickening as the Toad King‘s crimes against goblinkind are, I can’t deny the infectious nature of Goblinsmoker‘s glorification of this dark reality. If I’m going to be dropping into ‘genre’ music I’d insist that it is inspired and well, instant gratification on par with whatever heady swerve the Toad King gets when the embers of his goblin bong sparks a freshly popped brain from a goblin skull. Without partaking I’m not sure I’ve gotten the full texture of the record just yet but no doubt ‘A Throne in Haze, a World Ablaze’ finds these folks seizing the opportunity, making tasteful decisions, and pushing out fine music off their unexpected momentum. Memorable grooves, big-swinging stoner doom riffs, righteous feedback wails, and an effective dark-shrieking presence all add up to a moderately high recommendation for this EP, and even higher for the extra cross-eyed stoner/sludge devotees. 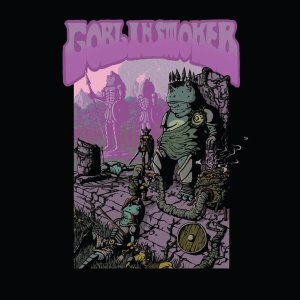