Upon revisiting my review for ‘Nebula Septem‘ almost exactly two years ago it becomes clear that my midwinter mind was yet thawing beneath a revelation by way of the complex beauty of French progressive melodic death/doom metal band Monolithe‘s seventh full-length. Misspellings, broken sentences, broken links, all did no due justice to meet shoulder-to-shoulder with the higher brained art in ear. One year ago all had come into greater focus when reviewing their illustrious live album ‘From Equinox to Solstice – Live at Beltane‘; I’d realized the Paris based group would have to settle into view by the will of loose, watery gravity. Today in a wash of their eighth full-length album I’d renege on the suggestion of the past, that ‘Nebula Septem’ was the limit and the height of where their mathematically arranged, prog-enriched extreme doom metal could go. ‘Okta Khora’ builds a fantastically ambitious and border-shattering science fiction epic from vivid and inspired collaboration, bursting in the mind as cosmic sediment, settling into a gripping avant-doom opus beyond expectation.

Turn your head to the knowing stars and slump into resignation. A cosmic funeral begins with instrumental oration, sorrow for the dead and menacing depiction of the zealous pull back the celestial curtain upon this eight part concept album: An advanced alien civilization of religious fanatics believe that their messiah’s prophecy would reset the galaxy itself, a purity achieved through mass destruction of all life. Reduced to their very atoms. Duty-bound by prophesied obliteration, the fanatic is catalyst for the eighth ‘primordial chaos’, a destiny that’d influence the civilization’s warmongering technology and death-weaponry on a monumental scale. Enter “Onset of the Eighth Cycle” as the portent of doom, soon chanted from the robes of extremists, ominous and glowing upon reaching preparedness for the inevitable end. The song begins with a dual lead harmony played backwards, much in the rousing style of Metallica‘s “Blackened”, soon introducing the celestial vibe of the album with a bassline snapping gorgeously betwixt extraterrestrial keyboards and wandering melodious lead guitars. Monolithe closer resemble a lushly orchestral death/doom army as the piece unfurls its harrowing tale of ‘biggest pictured’ science fiction armageddon. In the past they’d meditated upon the universe itself, a ponderous weight upon the mind, and now the core sextet set the listener within a timely parable for the seemingly ‘too late’ era of mankind today.

‘Okta Khora’ not only wears its science fiction storyline through lyrical prose but each song features an illustration from talented German science fiction artist Alexander Prauss, whose work extreme metal fans will recognize from more recent Progenie Terrestre Pura album covers; These illustrations make the vinyl version absolutely ideal for my own taste and beautifully imagine the larger plot of the record. The eight songs themselves are arranged with some similar mathematical and tonal aims as those of ‘Nebula Septem’ but this time all pieces ‘add up to eight’ instead of seven, most noticeably the song lengths follow a set path without pause towards the total 48 minute record. The sensation that the album is a single song feels almost like a ‘callback’ to the project’s extreme/atmospheric doom ethos on the first four albums where each would consist of one song — On ‘Okta Khora’ the illusion of a singular track lends to the pressing narrative of the full listen while individual songs remain greatly dynamic from piece to piece. The band suggest this sensibility comes somewhat by way of 70’s progressive rock and classic heavy metal influences. Is it the ‘Relayer’ of modern melodic death/doom metal? Well, it isn’t the worst thought to have when considering the heady scope and greater theme of Monolithe‘s eighth album.

Doom is inevitable and from the start ‘Okta Khora’ is not shy about suggesting apocalyptic ruin is already fully set in motion. Though the impetus, the battery powering Monolithe‘s lithe and roaring death/doom, becomes increasingly progressive as the band set their sights outside of established boundaries; In doing so the arrangements begin to personify the story’s actors rather than simply focusing on resting within the already impressive parameters of the previous album. “Dissonance Occurrence” stretches perhaps the furthest outside of their extreme doom metal language with a ‘softer’ progressive metal kick towards the non-extreme side of Opeth and Amorphis, or nearby each band’s dip into the millennium. The two part centerpiece for the album, “Ignite the Heavens”, is perhaps the most unmistakably Floydian peak of ‘Okta Khora’ as their slide into prog metallic jazz fusion includes saxophone, haunting chants, flute, cello, and even some contrabass from the brilliant Memnoch (Abyssic, ex-Susperia) whom I mention by name simply for recognizing him; Extra emphasis on the importance of the saxophonist’s performance on Part I and the incredible swelling end of Part II where these guest performers provide a stunning apex for the album’s powerful thematic surge. There the fanatic cultic protagonists unload their entire clip, causing massive destruction of all resistant fleets and planets alike.

The somewhat challenging full listen of ‘Okta Khora’ begins to weigh upon me as “Disrupted Firmament” pulls in. It is a great song and recalls the stormier style of ‘Nebula Septem’ to some degree but I’d begin to needed some respite before the final act swung into view. “Disrupted Firmament” re-energizes me at this point thanks to its studious use of harmonized vocals and ‘easier’ structure, feeling more like a classic melodic death/doom song arrangement. It is almost as if the camera pulls away from the floating debris of a galaxy on fire and the band are there in some great starship functioning as a sort of dramatic chorus for the finale; This comes complete with some deeper touches of anthemic progressive metal/heavy rock sourced lead guitars that enhance the obliterated climax unto thematic reprisal (“Okta Khora Part II”). No tragedy is complete without some paean to the failures of the human mind enslaved by religious misgivings and that’d be the tone I’d felt when reading the lyrics of “Disrupted Firmament”. Is it just the wagging finger of the Moirai at the end of time, then? Either way, it is a lovely armageddon to behold.

The beautifully directed progression of ‘Okta Khora’ and its greater theme is all quite a lot to take in despite how simple the arc and general resonance might appear. Not to mention the time it’ll take for the ornate nature of each composition/performance to fully sink in; I’d maybe listened three times in full before I’d even felt like I’d grasped and appreciated the stunning weave of the bass guitar performances, let alone mapped out the pacing of the the record as a whole. It didn’t just grow on me, in fact ‘Okta Khora’ became an object of vested study before I’d simply collapsed into its ride and let the full listen carry me at will. Monolithe‘s eighth album sets a high bar for progressive death/doom metal, a grand puzzle of inspired ideas that I highly recommend. 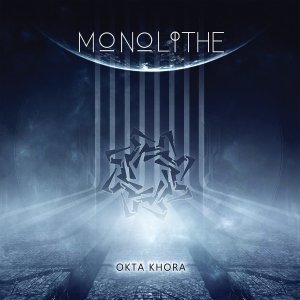