Springing into horrid animus as the red-eyed and rotten throated futurecast corpse of mankind, cursed with regret, this fifth full-length from New York City doom metal band Grey Skies Fallen peels away the necrotic irradiated skin of passing time and lays bare all lament. The sour truth of having lived to see the finite breath of the Earth expelled sends the arc of ‘Cold Dead Lands’ through a grand circularly bent colonnade, stylistically exploring the fullest circle of the band’s career thus far while escalating their history of introspection and mournful dread for this inevitable arrival of cataclysmic choking death. Trimmed to a trio sans keyboardist and sporting roughly three years of fermenting ideation applied to their most professional render to date, no doubt Grey Skies Fallen have never sounded better.

Frustration with the ultra specificity of sub-genre identifiers might irk the oddly shuttering minds of aging metalheads but it is a necessary adaptation for the sake of communication. Huh? Well, if I just told you to go check out this ‘doom metal’ album and you’ve got fragile baby ears for the heavy lunges of classic melodic death/doom within, it could scuzz up that fickle palate needlessly. As I’d inferred, ‘Cold Dead Lands’ is perhaps unintentionally full circle in style and intentionally introspective in concept featuring brilliant strokes of modern epic heavy/doom metal applied to their earliest obsessions with melodic death/doom metal via Scandinavia and England in the mid-90’s. Album opener “Visions from the Last Sunset” lays all of this out directly with its sullen ‘The Angel and the Dark River’-era My Dying Bride feeling via clean vocals that detour into the dark spirals of October Tide and a break or two towards Katatonia‘s first record. This expert slide between pure doom metal and melodic death/doom is incredibly difficult to pull off and these New Yorkers do it without relying on ‘easy’ cheap goth metal tomfoolery, though the slight vibrato of Rick Habeeb‘s cleaner vocals will appeal more to the Candlemass cult than the Pallbearer kids.

The third track, “Procession of the Tombs” fit like a glove from the first listen. It’s lead melody hooks into a Pale Divine-esque riff that breaks into dark rant a la recent Högbom-fronted October Tide records that’d act as a sort of calibration for the tonal spectrum of ‘Cold Dead Lands’ on future listens. The significance of this is more apparent if you’ve followed Grey Skies Fallen throughout their career which began as a fairly typical combination of mid-paced melodic death/doom that’d found distinction with prominent keyboard performances. Their debut (‘The Fate of Angels‘, 1999) holds up well enough but by the time they’d released ‘Two Way Mirror’ in 2006 they’d lost me along with many bands feeling out their takes on the game-changing tonality ‘Damnation’ brought by way of somewhat goofy progressive rock influences, applying them to a maudlin style of dark metal. ‘The Many Sides of Truth‘ (2014) was a return to form in some respects though it doesn’t feel like a progression in hindsight, especially as the ‘simpler’ deployment of ‘Cold Dead Lands’ finds much greater impact.

“Picking Up the Pieces” is the great motivator for this write-up and countless repeated spins of ‘Cold Dead Lands’ that’d result as it serves the sweetest fission of 90’s British doom metal weight (via ‘New Dark Age’) and Grey Skies Fallen‘s own narrative turn. The epic heavy metal intro with its inspired lead-in isn’t the first air guitar moment on the album but provides some foreshadowing for the intense hooks that come a bit later in the 11+ minute song. The trio really shine on these extra-extended pieces, showcasing some great appreciation for classic heavy metal’s penchant for ear-grabbing introductory statements and an understanding of how well they play in a live setting. The epiphany of the “Just let it burn / and build upon its ruins / Its finally my turn / I should have done this long ago” verse is brilliant and the hook that follows (around the 6 minute mark) would serve as a pair of well-deserved cement shoes, plunging me right in the thick of the imagery the album had been building up to that point. A fine moment that’d appreciate in value as I’d spin the album with increasing frequency.

Grey Skies Fallen had always been the exact sort of band you’d want Dan Swanö involved in, especially back in the early 2000’s, and the band have remarked they’d been wanting his innate extreme doom metal sensibilities applied since about that time. Self-financed, self-produced, self-released, and not opting for full-on crowd funding beyond the last record the band have not only finally managed to get that mix/master from him but they’ve written the exact right record for the job. Of course due credit to their long developed relationship with Keith Moore at Audio Playground for the recording itself, anyone hitting the knobs for this thing did right by the material. So, what’d be the downside to the listening experience, then? Minor notes mostly, as I’d found “After the Summer Comes the Fall” long-winded and could’ve been slashed down to about 7-8 minutes with much the same impact. It still flows beautifully back into the opener so, no real harm done. As I’d suggested prior, this is (for  my taste) the finest release from Grey Skies Fallen to date both in terms of their sound sans keyboardist and the stellar quality of its recording and production values. ‘Cold Dead Lands’ comes with a very high recommendation, particularly for the moderately sentimental melodic death/doom fan attuned to the sharper side of classic epic doom metal. 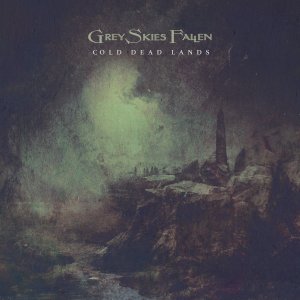