A gloriously wet-lidded union of Endymion and Selene, casting down her sky-blued peplos with an obscene sigh as the lighted crescents in the pools of his mortal eyes grow radiant and defined in reflection. Naked and wholly obscure, this eclipse serves an omen wretched and blinding in the vaulted sky of Caelus — For wise men to fear their Gods, knowing terror and wanton destruction would inevitably flow. The only mercy due mankind today is this eternal recline, a dead-eyed and ever-living eternity asleep in ruins caked with the ash of their flesh, torn away from screaming petrified skulls past due. This ‘ΕΚΛΕΙΨΙΣ’ (“eclipse”) is daunting collection of dues owed to these long-hidden spectres of mystic Greek black metal who’ve been endlessly hailed in deep occult prayer for their teenaged cloister of enlightenment within Athens circa ~1996. Tatir, Wampyrinacht, Vorphalack and Empire of the Moon each carried out their own visions of Greek black metal’s next underground wave beyond the bigger names we’re all familiar with today. Alas these fellows were more devout, eclectic, and quite talented as they extended the boundaries of that regional craft unto their own. Bear witness to that climb here as you discover this new peak, ‘Εκλειψις’.

Undoubtedly the most bizarre of the lot was Empire of the Moon‘s ‘For the Ancient Light of Sinn‘ demo from 1997 a tape which featured a pair of haunting, direly spiritual duets of flute and vocal for darkwave-esque performances highlighted by sparse session guitar accompaniment from Indra (then Necrolord, also of Naer Mataron and Wampyrinacht); While this tape was not as ‘complete’ and traditionally black metal as Tatir‘s ‘Fons Acheroni‘ demo, which featured much of the same collaborators, it evoked the exact right spirit of lurching ‘epic’ Greek black metal. The old iron of ancient blood wouldn’t leave their veins in the decades since as Empire of the Moon, along with a few others, revived from silence in recent years to serve as outlet for greater expansion of that classic mid-90’s sound with far greater technical and musical capabilities in hand. Their debut (‘Πανσέληνος‘, 2014) was absolutely proof that this occult conjured magia was yet sustained as it remains a compelling hypnosis of the full moon by way of otherwordly synth-flourished and rapaciously paced black metal. Is ‘Εκλειψις’ then a plighted overkill, a redundancy? No, in fact this second full-length is the hydra’s blood upon Empire of the Moon‘s arrows, a bullet that’d shatter the past and welcome cold oblivion on an Earth blind to its sun.

‘ΕΚΛΕΙΨΙΣ’ is the white eyes of marble-hewn heroes unpainted by the scouring acid of time, a pure and striking Adonis of regional black metal sounds stripped back to a creative peak in the hands of fellows who’d stood cognizant of that boon as they reached adulthood. More succinctly, Empire of the Moon sound remarkably authentic for good reason and the quietly superior taste of Greek black metal fans will ease gratefully into these bounding epic heavy metal striated black metal songs. From a practical perspective all of the pacing issues of the somewhat more brutally achieved prior album are remedied here with similar song lengths and a narrative arc split across the two sides of the LP. Whereas ‘Πανσέληνος’ dragged slightly within the 14+ minute “The Nine Skulls of Kali” no such excess exists on ‘Εκλειψις’ excepting the meaningfully grand exodus of “Per Aspera Ad Lunae – IV. Son of Fire”. Though each record spins at around 40 minutes, this latest set feels tightly wound and energetic because of its consistent pacing and vibrant keyboard/synth work.

‘ΕΚΛΕΙΨΙΣ’ is the black pupil in the iris of ἥλῐος, a vacillating compression of dark and light that reads with intelligence as a set of songs writ full of subtle reprisals of melodic theme amidst bounds of maddening intensity. Performances are traditional, rigid and magnetic in their energetic delivery, but never dryly slow or fraught with feigned ‘looseness’ many would expect with sight and ear for auld Hellas black metal. I appreciate that this album is no shambling corpse but a vibrant and strikingly dark full listen. I won’t suggest that these rhythms and techniques are all-out original and surely devout fans of the pre-’97 era of classic bands (Rotting Christ, Varathron, Kawir, Disharmony, etc.) will recognize the odd transitional riff, the inspiring lead, and the general stoic voicing of the old guard in some mild quantity. It is a grand tradition, though, and my personal favorite regional dialect of black metal music.

‘ΕΚΛΕΙΨΙΣ’ is an infinitely repeatable feat of classic forms, twisted but not mangled in its violent and forceful tirades of recognizable “spiritus asper”. In the moment and in reflection all pieces fight neatly and imbue great confidence in these ‘meticulous but free’ arrangements that flow so smartly together — It is a feeling reserved for classic high fantasy ‘epic’ heavy metal as well as every scholarly Athenian act I’ve mentioned thus far. As such, Empire of the Moon‘s second full-length comes highly recommended on my end; I’d suggest pairing it with ‘Πανσέληνος’ for additional perspective and with respect for the holistic vision of its creators. 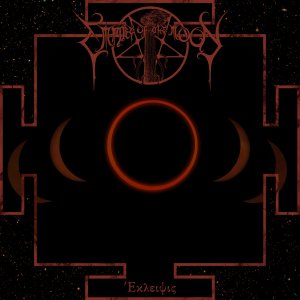