Are you living and breathing your values or are you merely re-stating them over and over and over until you’ve gotten enough of whatever it is you want? I haven’t had to ask myself this question in a decade thanks to the one quasi-talent I’ve developed, a moderate decline into socially acceptable solitude, but the random kindness of weirdos across the union has me wondering. The answer was simple as hell to start — No, nobody can live up to their own standards unless they’re aiming for ‘monstrous and kingly piece of shit’ or a feigned moralistic non-participant. Not above or below others, I don’t want anything, and the residual fear of society within comes solely from being included against my own will. Count me out, eh? Whatever I’d thought I learned in the midst of 2019 it all fell out of my head loose and chalky when pondering the finer achievements of fucked up underground rock music throughout the year. So many folks feign community and friendship for the sake of their own independence and I’d opted to work in defiance of this, to wait for the genuinely interested while persisting within the retarded sphere of uninteresting I’d create myself. It is not a veiled insult to say Milwaukee, Wisconsin based trio Conan Neutron and The Secret Friends have been successful and ambitious in a similarly crafted dimension of their own? No, in fact this double LP compilation of twelve 7″ split singles, ‘Protons and Electrons’, is the bulletproof argument for this admirable feat. Consider ‘Protons’ the third full-length from the trio and ‘Electrons’ a compilation of associated acts, friends, and (as they’d put it) a celebration of community.

Conan Neutron (Replicator, Victory and Associates, Mount Vicious) is a guy, er, the founder of Conan Neutron and the Secret Friends who’d had a wild spark up his brain around 2015 encased in the raw deal that is Oakland, California as he began to chip away at his own brand of antisocial rock records. That’d soon warrant power trio-ing up with Dale Crover (Melvins, Shrinebuilder) and Tony Ash (Coliseum, Trophy Wives). By the end of 2015 Neutron‘d pumped out two solid buzzers, fuzz’d n’ noisy intuitive alt rock that I’d have called ‘power pop’ to get my Pixies loving friend (Brandon) in high school to listen to it. Flipping over to the 2016 writing sessions for this series of ‘Protons’ split 7″ singles — The need to breathe, to push out more clank-and-wobbling rock air without all that sugary power-pop dripping from the walls, must’ve been somewhere in the highest registers of the brain as the sanity of the western world collapsed around them. It’d be their third session with producer Toshi Kasai and the finest, most inventive set of recordings from the project thus far.

Wit, grinning darkness, hummable jigs, and all matter of divergent focus slosh about within these personalized and inventive rock songs that’re surely the sort of mess we’d have a gaudy corporate rock umbrella term for back in the mid-90’s. The big point here is that each of these Neutronian tracks are singular events, tirades of sharply cut and intentionally faceted perspective each attempting to see light by way of precarious manipulated shadows, the full listen is inspired and ‘lost’ in its own head to great effect. I’d expect no less from the lyricist who’d brought you an alt rock record themed after the Hannibal Lecter series of novels but I suppose I wouldn’t expect as much. Infectious is the word as boppin’ post-punk bass lines swap for pained psychedelic rock janglers and a few post-‘Nothings Shocking’ swings before ‘Protons’ is spun. It sticks. Just reading the title for “Petulant Messiah”, “Parade of Deceit”, and “Hate Secretary” puts each chorus (or riff) right in my overstuffed frontal lobe. “Armies of the Mind” could whip on repeat for a week… The gist of it is that tonal variety and inspirational times have done a world of wondrous good for this third album from the trio. The depth is there if you’re one to suss out the minutiae of pop, punk, rock, and the adhesive that Conan Neutron and the Secret Friends provides.

The second LP is no less vital to the experience and in this form it serves as a worthy compilation featuring songs from bands featuring artists who’ve featured in Conan Neutron and the Secret Friends‘ touring line-ups, contributed to studio recordings, toured alongside the band or simply feature one of the three core members of the trio. It kicks off with a big rock stomp from Ash‘s stoney noise rock band Trophy Wives, a big and bulbous first hit. Chicago noise punk trio Nonagon are the next big highlight for my taste with “Saffir-Simpson” and their Ed Kemper Trio kinda art rock howling. Turbo Lightning‘s bubblegum poppin’ stadium rocker “Give a Man a Brain” would’ve instantly appealed to 14 year old me. When Mr. Bungle‘s ‘California’ came out a few friends brought a boom box to the rec center area at the University of Oregon and we played it out loud around 8:00pm while acting like idiots in the dark… Sorry; That memory socked me in the cerebellum as the intro to Dale Crover Band‘s “Sell Out” kicked off into a few vignettes that’ll have you whondering who whrote them. Twelve songs in total, all good stuff that compliment Conan Neutron and the Secret Friends‘ sound on split singles and make sense here all in a row as a compilation. The inclusion of these tracks is more or less unprecedented in my own experience and to give that additional platform to these other bands is an admirable feat and a pretty big ‘get’ for the completionist.

A lovably frantic and confrontational rock record with a slick ‘Bullhead’ reminiscent design on the gatefold that includes a full spread of 12 bands to check out once I’m done with the main even is exactly the sort of curio I’m apt to curl up with. Its dulcet ugliness pressed onto vinyl and made up all pretty somehow turned out to be my jam and I was thankful to spend a fair amount of time with it. I’d definitely picked up Trophy Wives and Cartographer records on the flipside but spent most of my time with ‘Protons’ after working up to these sessions from the start of Conan Neutron and the Secret Friends‘ discography. I’d recommend it highly to folks who want some post-punk and noise rock edge to their psych/alt rock intake. 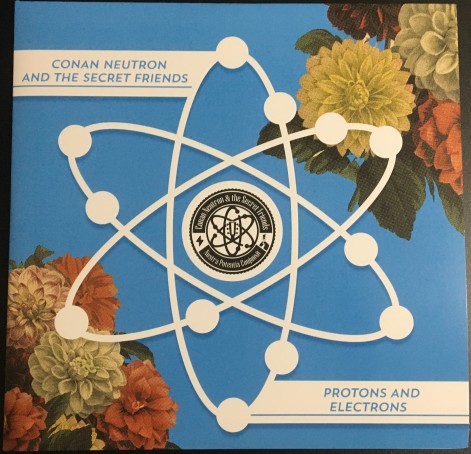 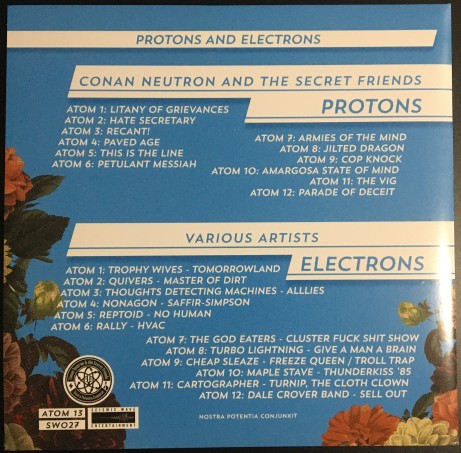 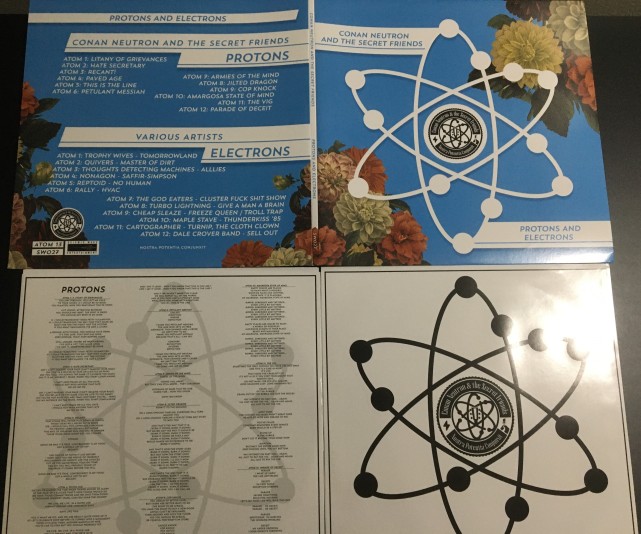 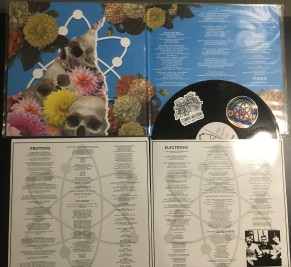 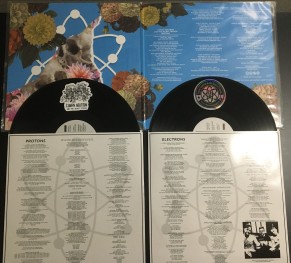