The golden cradle of the sacred child reflects the resplendent light of sanctuary, Ideon Andron, its dripping crystalline walls bind duty and justice away from furor by pact of Rhea and the heroic nymph. Nurse to Ζεύς and goddess punisher, Adrasteia is depicted as blade-bearing rebuke of hubris between gods and men alike — The manifestation of inescapable retribution, maintainer of great natural balance, but not a replacement for Themis. Heroic vengeance meant to balance out the destructive arrogance of foolhardy men by the powerful, cunning, and just hand of womankind is entirely the focus of this eighth gift, ‘Adrasteia’, from Athens’ unfaltering alabaster hewn pagan black metal band Kawir. Suggested as their most “quintessentially Greek” album in years, I’ll champion ‘Adrasteia’ as the latest and doubly impactful feat within a great string of fantastic full-lengths from Kawir celebrating the dimension ancient polytheistic traditions bring to the greater human experience.

Nemesic are the swaying chorales bearing the weight of album opener “Tydeus” where the stirring meander is inherited by the riff and Kawir‘s inclusion of Alexandros of Macabre Omen for clean vocals is birthed again even more prominent and glorious than prior (‘Εξιλασμός‘, 2017). Chest-stirring, eye-weeping Greek black metal of the sublimely melodic variety spills and sprays as the bull’s throat upon sacrifice as ‘Adrasteia’ waste no time bounding between the remarkable stoicism of ‘Isotheos‘ (2012) and the abrupt thrashing power of ‘Non Serviam’ (via Rotting Christ). In the space of two ~7 minute songs I am moved, charmed, and empowered by the luxuriate vision in hand as it expresses the warrior’s pulse and the unwounded paganistic psyche of the devout. I’d approached this album with great expectation and perhaps the first LP I’ve chosen to review in 2020 is immovable from my pantheon of favorites, regardless of what is built or crumbling by years end. It moves me, uncontrollably and repeatedly, toward emotion and imagination.

How is it possible for a black metal band to reign across numerous iterations of sound and abrupt line-up changes since forming 1993 and somehow retain identity on every piece? Maestro Therthonax‘ guitar work and songwriting is the obvious driver of change but it is the shifts in line-up that’ve kept Kawir adaptable between classic Greek black metal beginnings in the 90’s towards some original work in folk and pagan black metal in the 2000’s. All would commingle and ripen upon the aging vines of the last two decades and no doubt adding talented young folks from Caedes Cruenta, Cult of Eibon, Abyssus and Gospel of Grief has helped round out the many inspired ideas found within. It is a similar choice to that of old compatriots in Disharmony and Varathron where new blood breathes greater depth into an established sound. The sound of the album itself is yet classic Hellenic black metal in motion, replacing Lovecraftian keyboards and swamp-like dirges with traditional instrumentation, chorales, while leading with distinctly melodic songwriting that is Kawir through and through. The inventive aggression of the prior LP and the spiritual narrative and instrumentation of ‘Isotheos’ provide some loose guideline for how ‘Adrasteia’ is expressed.

“Danaides” suggests the story of two brothers and their two kingdoms with fifty sons in Aegyptus‘ house and fifty daughters in Danaus‘ house. As with most Greek parables the main themes are familial respect and due punishment, the sense that punishment is inescapable and that the gods will intervene to save those who act justly and, to damn those who’ve done wrong. Easily one of the more brutal and amoral massacres writ at the time, the that the fifty pairs would marry and all but one of the daughters killed their husbands by instruction of Danaus has no less impact even when considering them all incestuous, conniving royalty. My overarching point is that few pagan black metal bands are as uniquely suited for these legendary tragedies as Kawir and the theme woven into each mythological subject on ‘Adrasteia’ is remarkably inspiring as to revisit and rethink the intent of the myths and plays I’d not taken a deeper look at since college. “Medea” and the obviously related “Colchis” first revived the details of Argonautica in my mind, and how vital Medea was for Jason‘s most key success; But in keeping with the theme of ‘Adrasteia’ the preferable characterization is Euripides’ vengeful Medea, where her plot against Jason‘s infidelity and abandon is most fitting for the theme of this album and the lyrics therein. Sure, if I sound like a nerd a little too interested in classic Hellenistic literate I absolutely am and this does add to my admiration for the lyrics and themes of this latest Kawir record.

With six songs at 6-8 minutes each Kawir once again smartly keep the full listen ~40 minutes of neatly composed and ‘epic’ melodic pagan black metal pieces that’ll feel exactly ‘right’ and familiar in the ears of the established fan of their greater output. Beyond those in the deeper known, anyone remotely in love with the Greek black metal sound and heritage will undoubtedly fall into the graces of ‘Adrasteia’ immediately. As I’d stated previously, it’d been an instantaneous and well sustained affair between this record and I. Some of that’d been my own decade plus of fandom inspiring me to grasp hungrily at ‘Adrasteia’ with my ears but infectious melody, folk metal progression and flourish akin to ‘Isotheos’, and a beautiful set of greatly expanded vocal performances all sold it beyond the nepotism of established fandom on my part. That said, I was not expecting to have such an addictive response to ‘Adrasteia’ and my obsessive treatment of it with daily spins and often 2-3 hour sessions meant I’d had to overlook other works for the sake of living in the sphere Kawir‘d create as long as possible. ‘Adrasteia’ comes with my highest recommendation, a full score suggesting purchase and intensive self-immersion. This does not suggest a ‘perfect’ album but one capable of considerable emotional resonance and lasting inspiration. 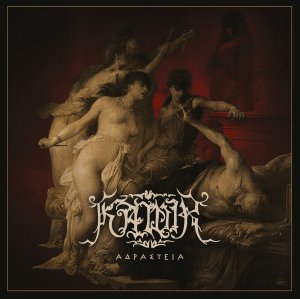