Not the first and nowhere near the last anti-cult counter culture conjured from alienation, rage, teenaged hormones, and Satanic rock n’ roll the phenomenon of black metal can at the very least be attributed to creative young men driven by their own daimonian unrest unto unintentionally vital independent art. The subject is a folly to approach from most any angle because the closest and most attributable stories we’d all love to hear were driven by impulse and a total disregard for collectivist humanity. Unless involved, few were witness to the reality the movement obscured with intent. Black metal diatribes among the spoiled, bored, broken, unlawful, and truly vehement children of the mid 1980’s developed into the anti-scene, an endearingly nihilistic autotelic philosophy nearby the “ars gratia artis” modus: A raw and ‘punk rock’ informed age of blasting enlightenment emboldened by the fatalistic doctrine of true Satanism.

We’ve seen black metal’s advent captured in oddly biased documentaries for years, told into fantastical lies by aging Scandinavian men who’re intent on selling whatever dry rehash a dead-eyed corporate record label had in their sights, and even a few movies too intent on selling fine young Norwegian criminals as some kind of alt-edged performative Lost Boys. The most endearing and earnest representation of the rising counter cultural phenomenon of black metal is of course angled downward into the xeroxed and magnetized documentation of the art itself. These relics of do-it-yourself independent art hand-reeled and barely scraped-out in the intrepid rehearsal rooms of young fellows the world over speaks for itself as naivete developed into powerful, and empowering, musical subversion. Known to sign his books in blood upon request, graphic artist Jean “Valnoir” Simoulin and his Metastazis design firm might have reached this logical epiphany as a point of inspiration in compiling this gorgeously realized documentation of black metal’s true and spirited radicalism spread across roughly two decades of black metal cassette tape history spanning 260+ pages of hand drawn and photo-copied abrasive representations of the raw and deleterious music they’d wrap.

At a glance, and without its cloth-bound corporeal body splayed in front of you, Analogue Black Terror appears almost trivial due to the ready availability of demo tape scans between several databases across the internet, right? The sub-title for the book explains itself in the plainest of terms as a curation: “A Visual History of Black Metal Demotapes Radicalism”, and this should clarify that the ‘training wheels are off’ and the books focus is on impactful and diabolic works that develop from scribbled hilarity towards a masterful epoch of refined infamy. Symbols, horrors, diatribes, and cultic vernacular all develop on the sleeves that’d house the propaganda itself as generations self-influenced black metal artists bore new circles across the planet. All of this is only evident to those who’re already well acquainted with 80’s extreme metal as music, particularly the true second wave of black metal and the tandem development of similarly outrageous death metal of the time. This is important when considering the development of archetypal and influential art styles, logos, imagery and lyrical themes inherent to rampant black metal today.

It certainly helps to know why a black-and-white scan of Mayhem‘s original ‘Deathcrush’ tape is an important item or why the hippie with the “langstrump” is fucking some kind of animal on the hand-drawn insert for Morbid‘s legendary ‘December Moon’. When presented plainly the late 80’s material covered on this book doesn’t immediately make the point of ‘radicalized’ beginnings because its juvenilia requires the context of a bygone era of shock, superstition and a more limited availability of information. There are several examples of late 80’s extreme thrash that are perhaps more outrageous and serious in style than the chosen scans of early Norwegian death metal bands like Old Funeral and Amputation (or the grinding riff-saladry of pre-‘Passage to Arcturo’ Rotting Christ) but for the sake of relevance as a depiction of the evolving true spirit of black metal and the dark arts, the 1980’s are limited spectacle within the scope of this largely 90’s based book. The best detail of this late 80’s focused section comes from the Black Death and Darkthrone tapes, notably scrawled with a teenaged Gylve Nagell‘s sense of humor, including the ‘A New Dimension’ tape’s admission of “We are all aware of the horrible sound of this tape!” which is well, fair enough. As I’d suggested, the 1990’s are the threshold crossed and though I wanted ten more pages of the 80’s, the theme is too easy to stray from if you have a passion for this sort of thing.

My passion for black metal sincerely begins with the aforementioned ‘Passage to Arcturo’ so, seeing their early body of work splashed across several glossy pages of this chronologically arranged book sent me on a two or three week bender of re-listening to each demo tape depicted, as well as the vast array of early Greek black metal releases I value on a deeply personal basis. I’d experienced this with video game cover artwork chronologies before, where the cleanly rendered pages of the book inevitably act as a very condensed surrogate for countless physical items and provide some exciting myriad of inspiring curation for deeper appreciation. At some point I was neck-deep in  There were a few demos I’d personally never heard, such as Florida death metal band Irreverent‘s ‘Inverted Crucifixion’ from 1991, a short hit of songs heavily influenced by the extensive reach of Hellhammer. A full page devoted to the Wild Rags Records version of Order From Chaos‘ ‘Will to Power’ is probably the cleanest render of it I’ve seen, though the logo and title are gold the book is presented in black and white. Nifelheim, Primordial, Abigor, Samael, Necrophobic and countless others spread legendary anti-Christian blasphemies from their very first breaths on these demos depicted and it is no wonder they’ve endured as artists since by the left hand of this majesty of conviction.

As a tool for building upon an established wonderment and appreciation for the extreme dark of classic black metal Analog Black Terror was an inspirational item, a muse for taking a closer look at the evolving symbolism and artistic values applied to the black metal demo. The arc of quality that I see ever-rising begins to distinguish away from death metal aesthetics completely by 1992, within the scope of this book, and peaks fucking brutally in 1994. Some of this eras imagery is included for iconography, such as Blessed in Sin‘s tribute to Euronymous, and Deathspell Omega‘s ‘Disciples of the Ultimate Void’ while others plant the seeds of black metals darkest corners of Satanism, sexuality, heathenry, mass murder, esotericism, and a very pronounced focus on morbidity in the first half of the 90’s. The only section I wasn’t inspired by was the 1998-2000 era. Nothing’s shocking at this point as the subject matter and art begins to lean towards war and total human annihilation while avoiding most any controversial or raw political symbolism. The selection becomes a matter of taste at some point and I found these all well-chosen, though beyond page 241 or so much of the demos were new to me, excepting Katharsis.

The book itself is a fine product that I’d recommend. Although I did have a two minor qualms with the user experience: Band names are small for the font used when identifying demos on each page, this was initially hard to read until I’d attuned the Bathory font part of my brain. Additionally, the Index lists the bands included, name of release, and year of release but I’d had trouble finding the page number where they are located at first; User error more than anything else. As a ‘coffee table’ book it is a striking and hypnotizing piece that compels the eye to the iris of the title without a too-clear sense of what Analogue Black Terror is. If you aren’t familiar with the demos depicted in this book that’d be the best reason to buy it because exploring these well-curated and reasonably inclusive demos gives a sharp set of examples for the dire extremes pushed as black metal inspired further cult in its first couple of decades. For the initiated it will prove a worthwhile document of inspiration. 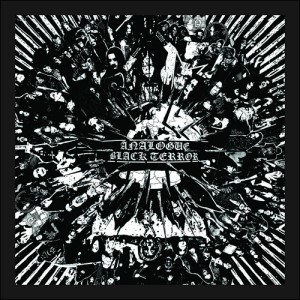