Where would you go next as a Berklee degree’d artist fresh off a ten year stint in a notable progressive power metal band? Historically the solo artist, the brand, and the endorsed instructor emerges at that point in the typical musicians career; This was the expected route beyond the three album run of Dark Empire, an increasingly progressive power metal group most would discover for featuring Persuader‘s vocalist early on. New Jersey based musician Matt Molite‘s increasing use of harsh vocals in that (his) band suggested some interest in raw textures starting with ‘From Refuge to Ruin’ (2012) but nobody would predict that his inspiration would soon lean into Sentience, a total shift towards a classic Stockholm born Swedish death metal sound circa 2014, a project that’d soon become today’s venerable Sentient Horror.

By 2016 Molite‘s ‘old school’ death metal project wasn’t just full-length ready but, met with an explosion of support for their debut (‘Ungodly Forms‘, 2016) which served as a major tent-pole act for two new (and now brutally thriving) independent death metal labels in Testimony Records and Redefining Darkness Records. What was all the hype about? When we talk about ‘old school’ death metal today the conversation, and any perceived originality therein, quickly leans towards sound design and Sentient Horror‘s disgustingly huge -sound- came by way of Molite‘s sourcing of a mix from Damien Herring and mastering from Dan Swanö; Think of it as if ‘The Chills’ were produced as cleanly as a Revel in Flesh record. A big and beautifully designed sound can render an album timeless if lucky but the most obvious draw for Sentient Horror can be reduced down to their study of Carnage‘s impact and Carcass‘ inventive semi-melodic heft balanced in varying quantities. There are many more layers to peel in terms of the projects own musical personality yet any description of ‘Ungodly Forms’ will do a well-enough job of describing this follow-up, ‘Morbid Realms’.

Lets one-up that reduction and expand the thought a bit towards Dismember‘s blurry sound on ‘Indecent & Obscene’, where they’d actually gone much more melodic than you’ll remember, then dig deeper towards heavier, depth-charging obscurities like Edge of Sanity‘s ‘Unorthodox‘ for its faster, more precise render and adventurous riffs. There you’ll find approximation of both a sound and a general style of death metal that could describe Sentient Horror‘s Stockholm-tuned grunt n’ grind expression. There are some appendices, though, as each of their full-lengths have this ambition towards catchy ‘Necroticism: Descanting the Insalubrious’ influenced riffs (see: “Loss of Existence”). Nothing as melodic or progressive as ‘The Spectral Sorrows’, though. Does that classic guitar sound obscure their output? The lines blur between distinct tone and memorable songwriting the moment that chunky HM-2 thunder device is integrated, slicking grooves and eating up any thoughts beyond “Swedish death metal” upon initial descent. As I’d suggested earlier, Sentient Horror aren’t solely interesting for their massive production values and ear-blowing loudness on record but it really does help push through some riffs I’d felt like I heard a hundred times before as I listened to ‘Morbid Realms’.

It doesn’t go progressive, atmospheric, technical, or even particularly brutal and the only real ‘angle’ that Sentient Horror ends up taking on ‘Morbid Realms’ is a very light melodic edge that often buddies up with rock guitar leads a la their suggested influences (see: “Ripped From Hell”). The major difference between this record and anything from the edge of 1993 comes with a restless attack, a sort of implied brutality that only lets up once or twice per song for effect. This heavier almost machine-like clip comes by way of session drummer Sean Meyers who is known for his progressive extreme metal projects Gates to the Mourning and the lesser known Beneath the Red Dawn where he’d collaborated with current Sentient Horror second guitarist Jon Lopez. At some point I have to think these progressive metal guys could write this stuff in their sleep, though I know there is a certain discipline to ‘classic’ death metal songwriting all the same, when it has riffs. That is the crux of the issue then! Does ‘Morbid Realms’ have riffs? Yes, though the focus turns to groove slightly more often than it did on ‘Ungodly Forms’ and the piece feels less memorable and more succinct because of the momentum they inflict.

The imposing presence and immediately gratifying attack of ‘Morbid Realms’ sells itself, it is a pure and almost entirely straightforward Swedish death metal record. There are inventive flourishes, heavy riffs, and big (nearly) ‘The Nocturnal Silence’ level grooves on this album although none of Sentient Horror‘s songwriting is as ‘up front’ with personality enough to outshine their elephantine guitar tone. When it comes to the whole Swedeath zeitgeist I’ve exhausted the classics, tattooed the obscurities into my mind, and the jumped headfirst into some fine impersonators since the early-to-mid 90’s yet there are always a small handful of folks doing something great with the HM-2 derived sound each year — Here at the end of 2019 Sentient Horror are one of the better acts not only pushing out that well-worn sound but doing something heavy and highly repeatable with it. 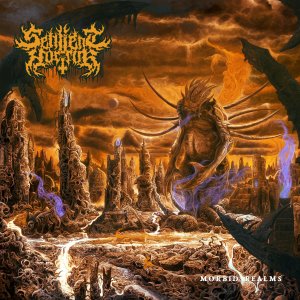