If the body can be considered of this Earth, an immovable organic reflection of natural interconnected beings, then that mirror is yet in the process of a slow and aching shatter beneath us. Sorrow’s woeful humidity oppresses from above this feverishly expanding ruin, a brutal weighted fatigue sours the functions of bowel, posture, and wretchedly red eyes in all terminally chaos-fed beings. A new derangement of the human pulse sinks all into earned resignation; How we all adore the end when honest, O’ how we all worship Deaths-head incarnate around us! May it’s gawking maze-like face shock all into wanton destruction and instinct of survival — If only to abate the numbness of modern life amongst our privileged scum. Clambering for hope, the clamor of humanity among this extinction event is art that can never hope to reach the truly ill and earnest… The great funeral must proceed even as pallbearers fall dead around us, enraptured in their own private darkness and without a hand to grip in solidarity. The procession is the only gravity that could compel the spiraling ‘self’ to stray from loss towards self-love and the potentiated joy of a life made perpetual by the disapproving sneers from the mouth-breathing Uruk-hai that surround all. There lies the bard and unburiable ghost of world-spanning funeral sermon Mesmur, a painterly depiction of crumbled and haunted existence and a tombstone for the loss of high-functioning thought among men who’re forced into survival at this edge of an inconvenient extinction. This third full-length album, ‘Terrene’, is entirely of this Earth, a funeral death/doom metal severance paid between the knowing doomed and whatever haunted unenlightened might choose to no longer curse themselves with denial.

Mesmur formed in 2013 as an international funeral doom metal project with members based in the United States, Australia, and they’d swap their Norwegian bassist for an Italian around 2015. Their self-titled debut came amidst a great wave of innovation (and wider-spread popularity) within funeral doom that’d been gearing up since about 2010. As groups like Evoken, Aldebaran, and Colosseum began to receive more pointed acclaim and inclusion so came nascent modernists like Bell Witch, Lycus and Un. I’d count that debut in limbo between newer atmospheric death/doom modernity and the nihilistic dread of classic funeral doom; It certainly didn’t sound like a hobby project and didn’t cater to the lo-fi tendencies felt within the underground funeral doom of the 2000’s. In 2019 I find myself regretting fawning over ‘Mesmur’ too extensively and suddenly turning my nose up at their cosmos-attuned follow-up (‘S‘, 2017) which’d hit me at exactly the wrong point of autumnal impatience that year. That regret stems from enjoying this third album for all of the reasons I should have loved ‘S’; The bass guitar presence provides a weighty melodic voice (not far from recent Mournful Congregation but, faster) and their atmospheric values are sky high. All burdens accepted, I find it daunting to sum these four extended compositions into quips and emotional tangents because each feels too large and interconnected to slice into pieces. Yes, I am -that- sunken into and absorbed by the experience.

Guitarist and songwriter Jeremy L. (Dalla Nebbia) brings back some of the more affecting dissonant resonance of Mesmur‘s debut with a big and heavily layered tone, switching things up while carrying less early Evoken influence in his arrangements than previous. The emphasis on the bass guitar as a fully voiced instrument is (again) a notable point of reference when considering the overall evolution of the project since inception. The only point of dreariness I’d longed for was some of those raw breaks into death/doom on the debut, which I still find to be the most powerful parts of ‘Mesmur’. There is a tendency to see an artists progression in time as a gathering of ‘lessons learned’ but I’d rather measure the way forward with idiosyncrasies and emboldening musical personality, and that is the greatest thought fueling my vision of ‘Terrene’ as a great success. In terms of funeral doom we’re not quite adventuring into the avant-garde but the envelope is beautifully shoved forth on “Babylon” a ~12 minute dirge defined by insistently placed and ominous keyboard work, a finely layered flute accompaniment from Don Zaros (Evoken) himself and that lumbering discord that begins to define the further depths of Mesmur‘s sound as their discography unfolds. Funeral doom is so often in love with its own spectacle that many groups appear overconfident that their atmosphere conveys well, anything, and “Babylon” is a good example of a complete-but-subtle melodic statement revealing value beyond giant chunking guitars and indiscernible progressions.

Though I could delve into the fantastic lyrical prose within and crow on about the absolute delivery of everything that I love about Mesmur as “Eschaton” hits its apex but a fan of the funeral doom niche should’ve gotten my key points by now. Mesmur move at a pace that allows for complete musical statements, their songwriting continues to develop in astounding ways that appropriately fits the earthen theme of the record while still providing a trip on a massive scale. ‘Terrene’ has the benefit of powerful themes, sound, and a solidifying presence but also it comes in a year where the funeral doom experiences are sparse but high impact. As such, I can confidently count this among the very peak of funeral doom records released in 2019, second only the old gods in Esoteric. A great accomplishment and a greatly appreciated bout of ruin here at the end of the decade. 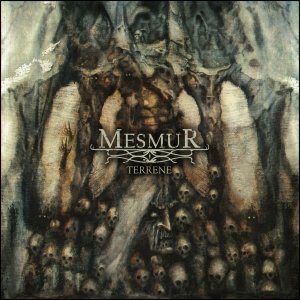