Though there is endless minutiae to delve into, and plenty of deserving accolades along the way, in terms of the progressive nature of an instrumental project like New York based trio Dysrhythmia a delineation between epochs of membership is probably the most pressing point of vault when considering their complete discography. Guitarist Kevin Hufnagel (Sabbath Assembly, Vaura) would exit While Heaven Wept in 1997 and form Dysrhythmia alongside drummer Jeff Eber (Zevious) and WHW bassist Clayton Ingerson soon after, focusing on a composed stream of consciousness with few borders. The peak of this formation would sign with Relapse Records for their third album (‘Pretest‘, 2003) a live-in-studio feeling bass driven progressive post-hardcore melange that’d been an artistic triumph but a mildly notable endpoint for the original line-up. The exit of Eber and introduction of Behold… the Arctopus Warr guitarist Colin Marston in his place would bring his larger than life, hyper-active fluidity translating very naturally into the bands sound by way of an enormous bass tone. All tides remained tentative until ‘Psychic Maps‘ (2009) which’d not only feature as a new standard of technicality for the band but also a strong early argument for Marston as a full-service producer and engineer alongside his emerging work in Krallice. The conversation steers towards the vibrant and flourishing ecosystem surrounding Marston beyond this point until he and Hufnagel would notably join the reformation of Gorguts and perhaps the ‘right’ audience for Dysrhythmia could be found through increasing exposure, the impetus being 2009 in every case. So, what of the ten years since? Whilst reflecting upon the three most recent works from the trio I’d found myself more in love with their ethos of sustainability amidst uninterrupted artistry than I was with the listening experience until ‘Terminal Threshold’ wove its path towards me as a cumulative envisioning of their own anthropocene totality.

Abnormal organic rhythms in tune with the beauteous and violent nature of extreme metal circa 2016 found Dysrhythmia in the ears of folks who’d thirst for a definable zeitgeist fitting enough for their odd modus, perhaps missing the point of creative freedom the project had always intended. ‘The Veil of Control’ (2016) was amorphously progressive, vaguely post-Cynic-esque, in its expressive and swarthy rhythmic atmosphere but without any of the expected spiritual peaks, deus ex machina moments. It was a sentence without any punctuation that rambled on and on enough that I’d felt it was an endpoint for the group in terms of barely stepping beyond the stylistic focus of the prior album (‘Test of Submission‘, 2012). The third eye finally blinks as ‘Terminal Threshold’ oozes a tear for apocalyptic times, creating expansive and excitingly narrative progressive extreme metal that’d lean towards the rubbery, shimmering histrionics of technical thrash metal and its evolution unto early 90’s progressive death metal to start; This eight full-length traces the upright intentions of Dysrhythmia from root to ruin where the bigger picture comes into focus beautifully as its ~half hour concludes.

“Nuclear Twilight” is a wicked flashpoint to kick the album off with its ‘Control and Resistance’ by way of Blotted Science seek-and-destroy entrance that rightfully indicates a focus on defined, neatly arranged experiences that pull from the more aggressive range of influences shared among the trio. The oceanic 12-string rhythmic gorge of ‘The Veil of Control’ feels more than three years in the past when followed up with the first few songs from ‘Terminal Threshold’, a battery of shredding and dive-bombed proggy sci-fi thrashed exuberance by comparison. The peak of this sensation comes with the space-raptured Obliveon-esque last third of “Plague Delay”, it breathes out such a thick cloud of  post-‘Focus’ progressive extreme metal that I’d almost not recognize it as Dysrhythmia were it not for the whole of ‘Terminal Threshold’ pulling from the glut their massive oeuvre. The duo of “Twin Stalkers” and [my personal favorite track] “Never Was Then Again” is where I’d felt the real brunt of ‘Nothingface’-era Voivod-isms slink into the experience and to great effect despite the ‘rushed’ feeling of momentum each track persists with for the sake of leading with an insistent instrumental voice.

If nothing else ‘Terminal Threshold’ and its apocalyptic vision stands out for its feeling particularly -written- between its three cohabitants; Intentional feeling composition certainly indicates the songwriter/performer personalities involved. I’d felt I could not only hear the spirit of early 90’s prog metal influence but also their post-millennium elevation by way of groups like Spiral Architect and Exivious filtered through the sharpened taste and dynamic of this trio. All of this falls enthusiastically into my own headspace where I’ve found ‘Terminal Threshold’ in regular rotation since mid-September for about three full months, one of the longer-standing regulars of the year for what its worth. I find instrumental rock/metal albums often sound incomplete and void of meaningful er, translatable statement and thusly difficult to recommend but I am certain that generational fans of everything from Atheist to recent Vektor will find this latest Dysrhythmia record immersive and rewarding. 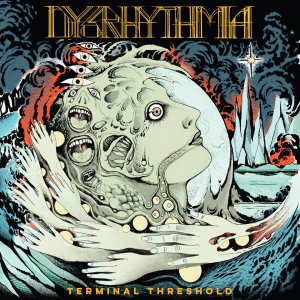