Not only can Australian legends Armoured Angel claim to be one of the earliest speed metal bands from the country they were also one of the first, if not -the- first to bring Slayer-ized heavy metal to their continent. The band that formed in 1982 and struggled to put out a demo until 1985 wasn’t yet the true ‘core’ of the experience but a long bout of ‘formative’ work that’d not find any strong found a point of definition until around 1987. That year bassist Glen Luck sought a whole new line-up where he’d team up with vocalist/drummer Matt Green and his brother, guitarist Joel Green (Witchskull). That span of releases between 1987-1995 is the best-laid history of Armoured Angel although they’d release a fantastic death metal album in 1999 entitled ‘Angel of the Sixth Order’. The evolution of the bands sound from ’85-’87 is relevant in some sense but the leaps made between 1989 and 1994 more or less capture why these folks are remembered today as one of the great hidden beasts of Australian extreme metal. There I’ll focus most of my energies, but don’t let that focus stop you from enjoying the detritus surrounding the main event. Look up Abysmal Sounds and Hell’s Headbangers Records shops if you want physical copies of (most) all of the Armoured Angel discography. Hey! I’ve done my best to research as much as I can but please feel free to message me (grizzlybutts@hotmail.com) or leave a comment if I’ve left out anything vital or gotten something horribly wrong! 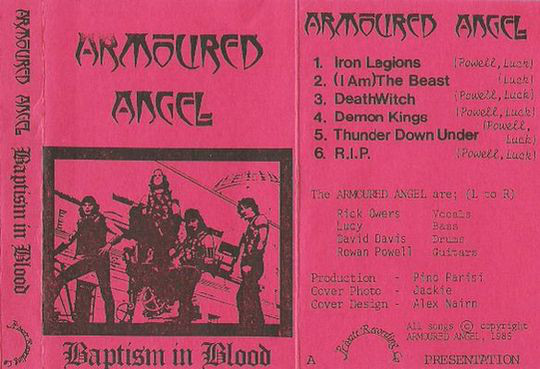 Of course I’ve written about the early days of Armoured Angel before, last year as I was doing a Retro Tuesdays column throughout 2018. This quote is still the best way to introduce this Warfare/Tank styled satanic heavy metal demo. “Even the most persistent kings of underground heavy metal rarely carry the torch as long as Canberra, Australia musician Glen Luck who formed Armoured Angel in 1982 but wouldn’t fully staff his project until 1984 when rehearsals lead to the Mercyful Fate-meets-NWOBHM demo ‘Baptism in Blood’ (1985). You can hear echoes of Iron Maiden, Tank, and the sort of hard rock Australia was known for in the Mark I incarnation of the band.” and I’d still stand by that notion. You’ll note that the main songwriters were Luck and his accomplice guitarist Rowan Powell. It’d appear Powell left the heavy metal guitar space and well, I’ve not found much more information on him as a musician since. The review continues: “With a taste for blasphemic art and the worldwide spread of speed metal creating the necessity for adrenaline-fueled attacks, Armoured Angel quickly took hints from the Bay Area mania caused by Slayer, Possessed and Metallica among others.” This is what was to come and it’d be about 1987 before the band was entirely restaffed and working towards a more modern attack. I love these songs, particularly “Death Witch” just for how straight up NWOBHM they are, each song has some kind of hook and plenty of pure heavy metal personality.

You’ll understand what I meant when I said the formative years of Armoured Angel wouldn’t appear relevant when firing up their full-bore thrash metal demo from 1989. This was their true debut in terms of style and it continues to behold some of their most remembered/revered songs. The blog entry continues: “‘Wings of Death’ (1989) was the first proof of this new line-up’s power and it came in waves of brutal mid-paced thrash that verged on death metal, along the lines of Infernäl Mäjesty but with a menacing uptempo groove that never colored far outside the lines of mid-80’s thrash. Australia’s first extreme metal band only upped their game from here on their third demo ‘Castration’ (1990) with a more aggressive iteration of their sound on ‘Wings of Death’ that focused on what would become Armoured Angel‘s most notable trait: The riffs.” So, let me backpedal here a bit because I could see the argument for the ‘first’ extreme metal band in Australia coming up. Let’s say ‘extreme thrash’ band and you’ll know what I’d intended to say. No? Still wrong? This holds up alongside any band you could name, with a release, all the same. The riffs on “Madame Guillotine” are pure thrash distillate and a good showcase of their early Bay Area thrash influences at this point.

Here is where I’m so on board it is ridiculous, ‘Communion’ is that apex predator statement from Armoured Angel where they’ve not just brought a death/thrash riff assault but a point of view that was distinctly their own. From the review: “When I first listened to ‘Communion’ it had the scent of Sabbat all over it but what really makes the demo special is the incorporation of late 80’s death/thrash style with guitar work inspired by that era’s releases from Amebix and Running Wild, but without losing sight of the upcoming storms from Sepultura, Slayer, and their ilk. Some of this could be said for ‘Wings of Death’ but there is greater urgency and intricacy to be found within the thrashing rhythms of ‘Communion’” … “Armoured Angel were pioneers in the Australian extreme metal landscape alongside (Sadistik Exekution and Slaughter Lord) and you can still hear echoes of their body of work influencing countless projects today be it Hellripper or Deströyer 666. Taken out of context and just as an early 90’s brutal thrash demo ‘Communion’ still holds up as a ripping example of the timeless appeal that thrash guitar riffs carry regardless of era, trend, or sonic fidelity.” and really I’d felt that’d be all anyone would ever need to say about Armoured Angel‘s early history but they had more riffs. ‘Communion’ is my favorite release from the band because I felt like they were on fire as a thrash metal band, nothing against their death metal tuned releases but this demo is just ecstatic listening every time.

Although a death/thrash record would have been an instant classic for Australia back in 1990 the ship was sailing for marketable thrash and the trio would begin to focus on death metal entirely. ‘Stigmartyr’ appears a little bit off-kilter at first and only because I think most old school death metal fans would expect something more in line with Death, or whatever Mortification were doing at the time with Sepultura riffs, but instead ‘Stigmartyr’ shows Armoured Angel had a specific taste level in mind. The most obvious reference is Bolt Thrower although I’d argue “Beyond the Sacrament” is far more direct and consciously not hardcore-guided than anything pre-‘War Master’. The comparisons to bands like Arghoslent, Ares Kingdom and their ilk would come much later obviously but they fit quite well. Does it hold up? Yeah, actually probably even more for folks who’re into the austere true metal attitude applied to death metal. ‘Stigmartyr’ was not widely available when I’d discovered the band so I’ve had less time to really obsess over it. I do love the thrashing down-stroked riffs all over this thing, brutally heavy stuff from start to finish. 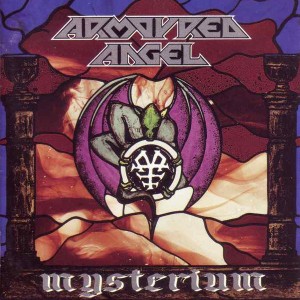 As far as I know ‘Stigmartyr’ was recorded with a rock producer at the time and it’d been a pretty bare home recording based on what that producer was doing at the time, or at least not the right situation to boost the grandeur of what Armoured Angel was doing at the time. ‘Mysterium’ still sounds like a home recording in some sense, a blustery DIY effort in terms of atmosphere, but here I’d say the band had distinguished themselves from the groups they could be rightfully compared to such as Gorefest, Bolt Thrower, and Unleashed at the time. What a fuckin’ killer EP though just in terms of forward-blasted riffs and death/thrash intensity on the drums. Green‘s vocals had taken on an almost blackened death metal tone, not too far from the British underground of the era but obviously a bit less mumbling. This is it, the real peak of the original line-up and some of the absolute best ‘first wave’ death metal to ever come from Australia before things went brutal. I know it will be annoying for the longtime fan to have me repeat this again but, if you’re a Bolt Thrower fan who likes death/thrash just as much you really ought to know this EP at the very least.

“Thy Blood Eterne” is surely a melodic death metal song on some level but that wasn’t at all why the band never got big after this professional demo tape hit the streets. Because first of all it never hit the streets, it is supposedly the remnants of an in-progress full-length the band were recording with Jaz Coleman (Killing Joke) where the Green brothers left the band mid-process. It is such a fuckin’ shame that album never finished and released because this demo represents a huge fucking chasm full of exceptional melodic death metal riffs that were actually pretty damned unique for 1995, or 1994 when this was likely recorded. Was this all for the sake of keeping up with the big things Alchemist were doing at the time? Probably, but Alchemist wouldn’t really get this melodically viable until after their second album. I’ve only ever seen one person, a reviewer on Metal-Archives ever bring this demo up and it is a shame because this was a wild leap into the beyond that is amazing as listening, never mind the potential these songs had on a full album production. “Oriax” should blow your mind if you’ve been following along with their discography to this point. The band’s Mark II line-up died with this demo and holy fuck what a shame that is.

There is a fitting reprisal, though, if only one huge album (‘Angel of the Sixth Order, 1999) through Warhead Records with Yuri Ward from (the brutally underrated) Psychrist on vocals/guitars and drummer Steve Luff. The drum production is horrendous on their debut album yet it is treated as a deserving classic among lovers of atypical melodic death metal alongside groups like Arghoslent, Alienchrist, and such. Abysmal Sounds put out a great remaster of the album but the 12″ has some terrible album artwork so I’ve only gotten the CD at this point. As for what the Greens did after splitting from the band in 1996 all I can think of worth mention is Joel‘s solid stoner metal band named Witchskull. Hey, it doesn’t matter where you fuckin’ start with Armoured Angel you’re getting a great-ass riff in your ears regardless! I love ‘Communion’ most but if you’re less of a thrash-ass go grab ‘Mysterium’ too.