Without a doubt the main influence driving Telford, England born death-thrash band Cancer‘s ripping sound from the start is a familiar set of names. The guitar work is practically translucent and the skin beneath is tattooed heavily with the mark of Slayer but because of the barbarically loose skill guitarist/vocalist John Walker was working with they’d make a punkish Venom tinged go of it to start. The story here was a universal impulse that’d changed the world of music who’d been touched by the real innovation in ‘attitude’ that preceded proto-realized extreme metal: Play fast, brutal and morbid fucking thrash metal. In this sense Cancer were among the best of this tradition, representing one of the earliest pure thrash metal influenced death metal acts out of the UK. They’re remembered as a sort of side-note for British death metal today but typically with very high regard compared to more popular peers. They were too big and fell too hard to be considered ‘cult’ but the early discography from this band saw them rubbing shoulders with the best of their era. I’ll be focusing on those early years for the sake of avoiding their putrid swan song (before their two reunion periods), the ‘Black Faith’ (1995) album. If you’re not familiar with their brief demo period and you’re big on primitive 80’s death metal, get hyped. Hey! I’ve done my best to research as much as I can but please feel free to message me (grizzlybutts@hotmail.com) or leave a comment if I’ve left out anything vital or gotten something horribly wrong!

They’d been at it for about a year at this point and no doubt these guys were rabid and ready to demo these songs but I doubt ‘No Fuckin’ Cover’ is what’d tipped the trio towards any sort of record deal. This first demo from Cancer is slow motion ‘Hell Awaits’ riffs with snarling, rasped vocals; A raw but not at all obstructed demo quality. It’d be cruel to suggest these were anything but songs, and that is an accomplishment in and of itself but the arrangements are rudimentary and to no great effect. They’d created some sinister thrash nonetheless and for 1988 this was an average first render. It’d be totally fine to skip these songs unless you’re a fan of the ‘slightly too early’ phase of a bands songwriting process.

Remember Jeff Walker‘s more rasped tone circa ’92-’94 when Carcass dropped the sort of belched out trip for a rasp? Cancer‘s John Walker sounded almost exactly like that back in 1989 on this second demo. This is a huge step up for the band who were still struggling with maintaining a faster pace in sync but ‘Demo #2’ represents an astute study in songwriting seemingly overnight where complex and neatly structured death/thrash songs modeled themselves after the popular death, thrash, and doom of the day. The tape starts with “Imminent Catastrophe” which’d clearly been inspired by the Florida death metal scene of the time and Death in particular, and no doubt the trip to Morrisound Studios for their debut full-length compounds that thought. “Into the Acid” is one of my favorite songs from the band and I’d always loved this raw-assed demo version of it, it just feels heavy as hell compared to the Scott Burns produced LP version. This is one of the few demos from notable/popular death metal that I find infinitely listenable and in some ways I prefer the scuzzy sound of the demo. It was clear to see this band was ready as hell to record an album and they’d sign a deal with Vinyl Solution because of it. 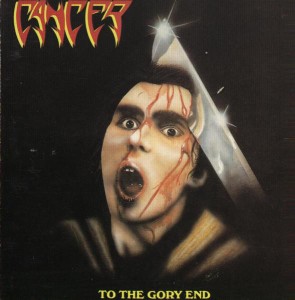 ‘To the Gory End’ is one of my favorite albums to talk about when it comes to expressing the awe of death metal’s first wave of mass produced full-length albums. I don’t know where you’d draw the line on said ‘wave’ but it’d been the step into the 90’s that saw musicians all over the world figuring out how to rip through evil sounding riffs without sounding like a shitty fart across a slippery surface. Few took as admirable a sluice as Cancer did, moving towards an extreme beyond that of 80’s thrash metal but holding onto the aspects of the sub-genre that made it -heavy-. Though Cancer didn’t sound like Slayer anymore they did retain more early Metallica influenced riffs than the average death-to-thrash stylistic conversion. They’d gotten a beefier version of the ‘Beneath the Remains’ drum sound for this album, too, and I’ll be goddamned if it isn’t one of the best death/thrash drum productions of this era. Though the riffs aren’t all golden along the way I don’t think there is a better medium between late 80’s death metal and the arena sized thrash of that same era than this. No doubt ‘To the Gory End’ was well received by most and they fit nicely on a label that’d released records from Bolt Thrower and Cerebral Fix the year previous. The cover art here from drummer Carl Stokes (Hail of Fire) wasn’t big sell for me in the mid-90’s but it grew on me, the same could be said of the album itself. As much as I enjoy this album Cancer are probably best known for their transition into a pure death metal act the following year. 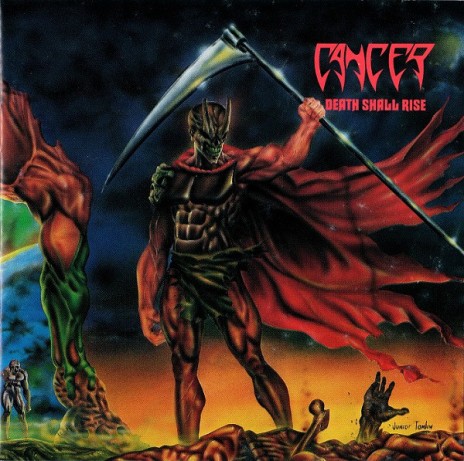 If Cancer were foaming at the mouth for Obituary, Death and Sepultura the year prior then their second full-length ‘Death Shall Rise’ was the result of making friends with Deicide. Hell, Glen Benton even contributes backing vocals on “Hung, Drawn and Quartered”. The sound of the album itself is about as brutal as that’d suggest and it could be likened to that of ‘Human’, or Malevolent Creation‘s demo sound. Hell, James Murphy had joined the band for this album right after playing on Death‘s ‘Spiritual Healing’ and Obituary‘s  ‘Cause of Death’ the year previous. Cool as all of that sounds it ends up being a pretty average death metal record that is front-loaded with brutal tracks. The style here is close to early Mercyless or Thanatos without losing the tight-necked pacing of the first album. I don’t like much of Murphy’s stuff and don’t think his leads fit into most old school death metal beyond ‘Cause of Death’. I usually start to lose interest when “Gruesome Tasks” comes on, as the riffs begin to sound redundant. Even if I’m a bit rough on records like this, I do realize that this album holds up way better than most death metal released today and Cancer were fantastic songwriters; With that said they’d seemingly set the bar lower after this record. 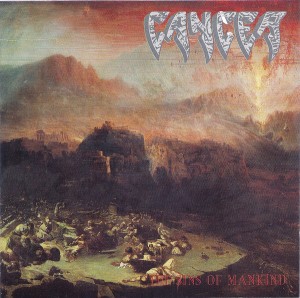 With Murphy out of the band by the end of 1991 his replacement would be one Barry Savage and ‘The Sins of Mankind’ would come in the middle of 1993. The first thing you’ll likely notice is the production from Simon Efemey, who’d previously worked on the third and fourth Paradise Lost albums, is decidedly different than that of Scott Burns. Though the guitar sound seems weak and thin to start you’ll quickly find that it works best when the thrash metal side of Cancer kicks back in. I’d hated this album for at least a decade before I’d ever give it a fair chance almost entirely because it wasn’t what I’d expected it to be at the time. When the band released ‘Black Faith’ on EastWest Records (post-Pantera getting big) I began to appreciate ‘The Sins of Mankind’ quite a bit more for its adherence to old school death and thrash metal songwriting. To lean back towards thrash metal and away from pure death metal was in line with the original spirit of the band and I’d eventually come to appreciate this record just slightly more than the prior. The riffs/leads are just better, too, so I’ll trade riffs for the distinct Morrisound dressings of past records.

Don’t get too much more excited than that about Cancer. They’ve put out three more records since 1993 and just about nobody noticed. Well, the most recent record ‘Shadow Gripped’ (2018) was not bad and appeared to retain the good faith of the earlier recordings in some sense without recreating any of that magic. If you’d like to hear one of the most bungling and awkward groove metal records of the 90’s well… get in line in terms of mid-to-late 90’s death metal trend-hoppers starting with ‘Black Faith‘. Oddly enough, even their worst album has at least one good thrash riff in the mix. Cancer are underappreciated for their early work but maybe appropriately so since they’d been so inconsistent beyond the early ‘trend’ of extreme metal where they’d grown up. The most essential records are pretty clear with ‘To the Gory End’ there to satisfy thrashers and ‘Death Shall Rise’ to perk up the death metal die-hards.