Hailing down upon me as a shapeless and burning sheet of the very sky above the incessant flapping of our combined mercurial form ripples toward its terminal velocity with the suicidal intent of a nuclear shell. We’d form a spray of bullet and bloodred mist as we descend, accumulating great spiraling force and devouring the lust for death among men as I and the new red-black darkness descend as one. Greedy lust and covetous mania rained upon mankind is hardly a drizzle in this uncommon era MMXIX, the endtyme and anthropocene ineffectual. The great Satan inside of us has grown fat and ruthless as man outpaces auld cartoonish villainy with his ever bloodsoaked fingers prying open jaw after jaw, filling their cracked wills with servitude, suffering, and plague. Sparagmos and omophagia will yet sustain the strongest against the modern day Pentheus as a true choir of flesh-ripping death swarms in the primate minds of all men; With this rapidly beating drum cratering the Earth, the barbarian awakes. This third full-length album from Spanish war metal collective Teitanblood arrives as the red mist on the back of a dull knife, the raining napalm of the End, with a message of mayhemic truth that’d send even the most resolute into a furiously morbid Bacchic frenzy. ‘The Baneful Choir’ continues a tradition of revelry within the ruin of men and the creation of greater Hell on Earth, molding itself for greater impact while mercilessly refusing to bend.

Unsure of every major actor and assuming no ego applies, there is no certain information I could glean from the periphery of ‘The Baneful Choir’ due to the stark-naked amount of information available. This quiet and controlled presentation slaps away the side-eye of the curious towards the patterning and lyricism of this par-for-the-course record from Teitanblood and I consider that a mild drawback. Having set the bar high with ‘Death’ (2014), an album that’d incorporated extended song lengths and bravely occult death metal into its being, the first impression that ‘The Baneful Choir’ posits is a reduction of all structures into a mushing, billowing frenzy. Though each EP release from the band since 2009 featured 10-15 minute songs it’d been a surprise to see this new record broken up into eleven parts and 52 minutes. To be sure these parts are not segmented pieces of an ever-flowing whole but shorter and more numerous songs that defy the old structures. The death metal fan within admittedly rescinded some interest immediately as I’d find less of the dark ambiance and extended forms than expected.

Some relief came in the midst of the first three tracks, a roller coaster between the ‘Through Silver in Blood’ by way of Chaos Echœs buzz of intro “Rapture Below” and the growling sledgehammer of “Black Vertebrae”; I couldn’t imagine a more perfect introduction for what Teitanblood do yet if you’re not a war metal fan “Leprous Fire” will be the first test of judgement for the uninitiated. In recently coveting the riff-heavy war metal of Abysmal Lord and Antichrist Siege Machine in recent months there is the sense that Teitanblood are a step in a different direction despite carrying in their ranks members of the ungodly Proclamation. Draw a line between Proclamation, early Teitanblood and Sacrificio today if you will but the relation is skin deep in most aspects. Covering another 50+ minutes of material doesn’t find this intrepid band resting upon a small handful of ideas and songs akin to Archgoat, Wrathprayer and even Impetuous Ritual enter the fray but at no point does this feel like a step beyond that of ‘Death’ five years ago. It is just as good, and only that, for better or worse.

Every second sets a hammer to the listener’s rapt attention where the cumulative set of subtle movements that make up each song on ‘The Baneful Choir’ aim for pain and brutality rather than any sort of measurable intricacy. The detail-oriented listener surely can find that intricacy if so inclined but, it will take more focus than seems reasonable, you might be missing the ‘point’ as it were. Teitanblood surely make higher art out of barbaric and craven mania than most bands labeled ‘war metal’ but their music shouldn’t be over-sold as anything more than a fine example of said sub-genre mutation taken to an atmospheric death-like extreme. That said there are many thrilling parts, such as the trio of pieces that open the album, the pyrrhic death metal fury of “Verdict of the Dead”, and the albums brutal ~9 minute opus of a title track. “Inhuman Utterings” is a fine example of why Teitanblood have always been notable, their brutal approach to war metal gives the impression of a death metal root but the closer you’ll look the base of their work isn’t too far a cry from Blasphemy or Proclamation.

There is no thrilling tale of discovery, no cat-and-mouse game of interest, nor was there a revelatory track that’d act as a point of enlightenment while discovering ‘The Baneful Choir’; It has been a savage beating delivered with some great meticulous care paid to a repeatable and insidious form of blackened death metal but by no means did Teitanblood create an album that’d intend to hook in the mind fancily, instead the intent seems to be deleterious and merciless. Again par for the course with the bar set quite high enough, moderately high recommendation. For preview purposes I’d suggest the most immediate point of interest is the pairing of “Black Vertebrae” with “Leprous Fire” and if you’ve forgotten how heavy these guys are jump straight over to “Verdict of the Dead”. 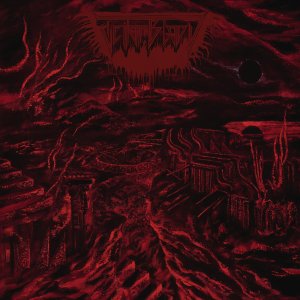