With some serious hesitancy I present the ‘golden years’ of uh, Christian death-thrash metal band Vengeance Rising who’d have to settle for their third name on account of Sacrifice being taken in 1985 and Vengeance being taken in 1988. There are some very preachy and I guess easily made fun of songs in the mix but the full evolution of the band was actually pretty cool and even if just by virtue of being a mid-to-late 80’s thrash band there are riffs all over their discography. It all expresses kind of like Mortification‘s early discography where the quality of recording/production was originally very inconsistent between releases before remasters were done. If the Christian alignment of the lyrics serves as some point of annoyance some of the eh, less imaginative points of the music will likely be more of a problem for the average death-thrash head. Hey! I’ve done my best to research as much as I can but please feel free to message me (grizzlybutts@hotmail.com) or leave a comment if I’ve left out anything vital or gotten something horribly wrong! 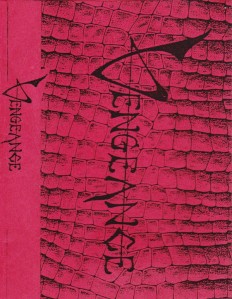 This whole Vengeance deal starts off on a pretty solid note as the Venom-esque “White Throne” captures the band at their most primitive but essential building blocks shared between punk rock infused thrash metal that wasn’t massively extreme for 1988 but was fast and crazed enough to warrant some attention. It really does feel like Roger Martinez and crew were ‘taking the piss’ out of bands like Possessed and Slayer but at this point but their songwriting was probably too primitive for it to fully come across and it was more in line with crossover thrash to begin with. Most of these songs, if not all, made it onto their debut as Vengeance Rising that same year.

Do not at all trust your first impression when the opener/title track rushes in with an old Possessed riff and a real Bay Area set of riffs set to what truly was a “cookie monster” vocal. Why? Because it does get worse and quickly as “Burn” begins to incorporate chants of ‘Burn Satan, burn!’ and the corny cock-rockin’ scoot of “Mulligan Stew” gives way to uh, “I Love Hating Evil”. I’m not trying to bust on Christian heavy music entirely for the subject matter, more importantly the whole of ‘Human Sacrifice’ wasn’t ready for such a big, expensive production back in 1988 because it was clear the material wasn’t ready from the moment I’d press play. Over the years I’ve found I can appreciate this record for its primitivism and misplaced, corny rock influences. Historically speaking this was one of the only Christian heavy metal bands that’d managed something akin to extreme metal at that point and they’d quickly become popular for that ambition towards aggression early on. 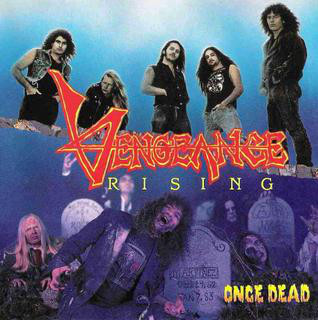 This time around we’ve got a completely passable if not kinda raw thrash metal record from Vengeance Rising with the same line-up and a slightly smaller production crew. The drums are tuned/mixed so poorly for my tastes I rarely find myself returning to ‘Once Dead’ not only because of the recording quality but the generally riffless nature of their compositions made it a total pain to return to. The placement of their horrendous over of Deep Purple‘s “Space Truckin” really kills any rhythmic momentum the album had managed at that point. I’ve definitely heard worse thrash metal and I do appreciate that they’d at least improved in the couple of years beyond their debut. 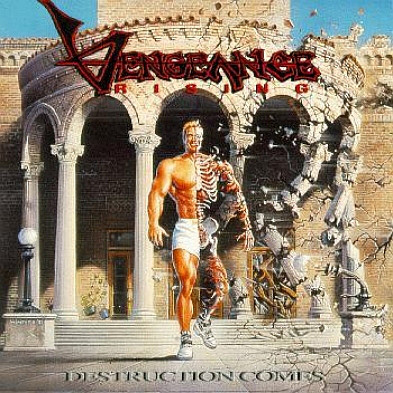 Just a year later Roger Martinez had fired everyone in the band and decided to enlist Deliverance drummer Chris Hyde for a third album entirely composed and largely performed by Martinez himself. The results should be pretty clear as he’s gone in a death/thrash direction and sounds far more focused and capable than ever before… The major flaw of this release is a layer of vocal processing on Martinez‘ vocals that sounds weirdly artificial and even moreso after the remastering process. The riff progressions are fairly simple and the guitar tone isn’t particularly heavy but you have to hand it to the guy for clearly putting his all into this album and showing more conviction than the two before it. It is a shame about the vocals, though. Martinez would produce debuts from Mortification and Tourniquet while guesting on Deliverance‘s ‘What a Joke’ record. He was clearly in a circle of the better Christian metal bands of all time but that should not affect the reality that even on their third album Vengeance Rising still sounded remarkably amateurish, but on their (his) own terms.

This endpoint for Vengeance Rising does end up justifying the means to get here though it isn’t a spectacular finish. ‘Released Upon the Earth’ is a very light-on-the-riffs death/thrash album that essentially reiterates Martinez‘ vision for ‘Human Sacrifice’ back in 1988 but it comes with skills and musicianship capable enough to pull it off, however crude certain aspects are. Though they used aliases, members of Deliverance and Tourniquet perform guitar and bass along with Martinez the resulting album is probably the best version of Vengeance Rising to date but I personally prefer the previous album’s sound slightly more and there were more than a few hints of groove metal creeping into the riffs here.

While I might not be a huge fan of their discography I could see how this band would be an important gateway to heavier music for folks who limit themselves to religious music. The full swing through their discography reveals few highlights and the transition from punkish thrash towards death/thrash is equally subtle. The only essential listen I’d suggest here is either ‘Destruction Comes’ or ‘Released Upon the Earth’ because either album sums up what Martinez’ vision well enough to represent all four albums. It wasn’t all Martinez doing the work, though, and most of the original line-up would reform after some reunion shows in 2004 where they’d eventually change their name to Once Dead and release a… terrible album in 2008.