Growth is a wickedly subjective trip to set upon the forehead of the creative type as the concept of ‘positive change’ isn’t mutually exclusive (or at all guaranteed) with the passage of time. Balancing atop the expectations of vested interest and insight gained from the distance that time’d create is precarious for the ‘brand conscious’ group of musicians. Without considering any intention so commercial or pretentious in this case, the real tug-of-war comes with capturing today or emulating the past when any great space of time divides a discography. On some level Rochester, New York based doom metal band Orodruin were never graced with an entirely secure identity to begin with beyond their intensely ‘in hindsight’ celebrated debut full-length ‘Epicurean Mass’ (2003), one of my favorite doom records of all time. Even that debut hadn’t sounded entirely like prior demos and the shift towards the psychedelic progressive rock of Blizaro beyond 2004 left Orodruin up in the air for quite some time in terms of official releases. The phenomenally psychedelic ‘In Doom’ (2012) EP was limited to death and served as the point where most fans would sort of give up on the cult heroes until something concrete materialized. So, what is the Orodruin sound in 2019? If you’re like me and you’d discovered this band off of a split with Reverend Bizarre in the early 2000’s then it might be surprising that their second full-length album moves away from the molten stoner/doom plunge of old and stretches sixteen years worth of aches into a cathartic and moody epic doom/heavy metal album, ‘Ruins of Eternity’.

Without any reasonable way to purchase or stream ‘Epicurean Mass’ it falls to the uninitiated Orodruin listener to decide upon the importance of the context a previous release provides. As an established fan who’d been recommending their first album to folks online since 2005 it isn’t any great surprise that a sixteen year gap would produce two very different pieces of a whole but it did surprise me how good the shift towards ‘epic’ doom metal on ‘Ruins of Eternity’ ended up being. Written over the course of 2016-2017 and recorded in 2018 this second Orodruin record is the first release to not feature drummer Mike Waske (Blizaro, Crucifist) and this’d provide a chance to sit in awe of what vocalist/bassist Mike Puleo pulls off as the drummer for these sessions in addition to great strides made in his usual craft. His vocals are almost entirely different than on prior releases, expressing a range that can stretch from Slough Feg to Warning in the space of ten minutes. The majority of these songs feature a more sensitive tone a la Simon Matravers era Solstice alongside the theatrical cadence of Wheel (see: ‘Icarus’) or even Magic Circle depending on the song. In fact 90’s Solstice might be the best point of reference for this 70’s heavy metal/80’s doom metal guided spin.

Don’t get me wrong, the main reason you’ll want to check this album out is its powerful treatment of ‘traditional’ and epic doom metal and in that sense the style of the album is going to be impactful enough to win many, many folks over. Plainly stated, it is one of the best. The appeal of this sort of heavy/doom metal is well proven but Orodruin are a band who write songs, their modus has never been to just plainly vibe on repetitive ideas. For an album written in the space of two years, which does include a couple of reworked songs (see: “Letter of Life’s Regret”), there is some impressive care put into the lyrics which are doubly verbose compared to those of ‘Epicurean Mass’; The result is a more personal full listen where each song matches the existential dread and dejection expressed by Puleo‘s voice. It isn’t all somber dread and the crumbling chaos of todays world but most of the full listen will feel as if it were. “War on the World” and parts of “Man of Peace” do shake out a little bit of a trad metal boogie along the way.

Choosing which songs to highlight or fawn over becomes a heated debate in my mind if only because there are songs that could be considered proper singles and others that offer different sorts of hooks and charm beyond chorus and riff. “Voice in the Dark” has a bit of everything that Orodruin do well on ‘Ruins of Eternity’ with a building network of sludgy peak Soundgarden-esque verses driving the pace of the song. I’ll be clear though, it is Puleo‘s performances that had me coming back for more listens, and primarily because there is a bit of ‘New Dark Age’ in this record that I greatly appreciate. There are clever bouts of riffcraft throughout but gone are the clunkier, heavier pillars of doom that’d distinguished ‘Epicurean Mass’. So, what stuck in the head and the heart? Well, ‘Ruins of Eternity’ is not the sort of album I’d break up into sections or separate experiences and many of these songs work so well because of their neighbors, such as the aforementioned “Voice in the Dark” which’ll have far less impact unless paired with the Icarus-ian melodrama of “Into the Light of the Sun” and before the late 80’s Candlemass brood of “Hell Frozen Over”. There is plenty of joy to be had picking the flesh from the bones of such a release but I found ‘Ruins of Eternity’ was served best whole, taken fairly serious, and with a reflective mood.

This second Orodruin album is a tall order, an imposing piece that finally gives shape and story to the drought in between cult releases, that should challenge the listeners ear for the absolute depth of detail within. If you’ve somehow survived this long as a fan of doom metal but not epic heavy metal then the tone of this album may not be entirely to your taste but I’ve always felt like an earnest vocal performance has the power to change minds, especially over time. As a fan looking beyond the nepotism of old classic releases I found myself awestruck by this album simply because it was another paradigm altogether, an unearthly shift towards greater emotional performances for a band I’d long lumped in with the ‘new wave’ of doom metal springing up as the millennium began. In terms of the over-saturated world of doom metal in 2019 there is yet plenty of space for albums of this high a quality and as such I can highly recommend ‘Ruins of Eternity’. For preview purposes I’d suggest starting with the Magic Circle-esque groove of “Man of Peace” and then the gorgeously dramatic pairing of “Into the Light of the Sun” and “Voice in the Dark”. 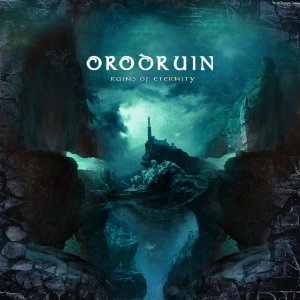