Beyond the apocalyptic plague of the prior year there was little to no expectation of an immediate capitalization of the momentum created by Oslo, Norway black metal trio Djevel‘s stunning creeper hit ‘Blant svarte graner’. The hour long piece had captured a fantastic sense of devastation as Trond Ciekals‘ (ex-Ljå) vision for the reasonably prolific and steadily consistent project built into a greater beast beyond the already impressive peak of ‘Norske ritualer’ (2016). In fact 2018 had been rounded out with what’d turn out to be a sort of ‘ammo dump’, a slashing of excess limb and heart by way of the acoustic EP ‘Vettehymner’. Unbeknownst to the listener this would serve as an ejection of extraneous ideation, a purge in preparation for something darker, more aggressive and personally charged: This sixth full-length of deeper-scathing Norwegian black metal, ‘Ormer til armer, maane til hode’. The devil himself does not arrive with brutality, though, and instead through the romance of the mind curating the serpentine limbs of man. The duality of all men who’d carry the eternal staining of Hades’ spite in hand and yet fixate with Endymion’s gleaming eye for Selene is the true artistic revelation of this violent-but-beautiful classicist black metal record. Embrace the nature of the darkness and mayhem’s surround but hold fast your gaze upon the swaying hemisphere of her moon.

Despite slashing away the acoustic accoutrements and scraping out a doubly raw production Djevel cannot help but amplify melodic statements in tandem within their most destructive attack yet. That is to say that ‘Ormer til armer, maane til hode’ is the venomous Satyricon and Taake influenced black flame to be expected but this time around I cannot help but fixate on two equally vibrant second wave statements that are rarely a point of comparison: The eternal poignancy of Kvist‘s ‘For Kunsten Maa Vi Evig Vike’ and the deeper melodic atmospherics of debuts from Sorhin and Arckanum. The intention is not modernity but rather a capture of the magick of the early-to-mid second wave of black metal seen through less juvenilia-adorned eyesight. As such the grand and sweeping melodies of Djevel persist while their previously characteristic folkish drapery and some of drummer Faust‘s dynamic performances have been largely scaled back. With both feet planted firmly in the old ways of Scandinavian black metal and a mind still cognizant of the sophistication of todays black metal standards there is the sense that ‘Ormer til armer, maane til hode’ is a response to any suggestion that Djevel is anything but a pure Norwegian black metal band and because I am already very familiar with their discography, I’m not sure that is the most earth-shattering declaration to be made. It is a good album, though.

‘Blant svarte graner’ was undoubtedly an ‘all in’ moment where the best ideas Ciekals had been developing across four full-lengths landed upon an opus that appreciated in value with time thanks to a sort of ‘refresh’ among membership. Here in late 2019 it’d seem that honing in on his vision continues to reward ongoing fandom with a mix of atmospheric and melodic guitar work that again recalls the era of post-millennium Norwegian black metal as it was shaped by the intensifying popularity of groups such as Taake; Perhaps I am too much of a fixated fan of ‘Nattestid Ser Porten Vid’ alongside all pre-2006 works from the artist and am blinded by a similar dynamic ratio of atmosphere, melody and destructive rawness but, my mind naturally places Djevel in good company all the same. Point being that the beauteous waves of “Et Menniskes Hele Korpus Og Legeme” and the driving riffs that theme “Dreb Dem Alle, Herren Vil Gjenkjenne Sine” evoke an era of reconfigured orthodoxy to loftily considered to fully regress back to the early 90’s and instead invoke the early 00’s step away from the bullshit of inane symphonic pageantry. Few people will retain this record for the sake of any of these stylistic markers and instead the draw of ‘Ormer til armer, maane til hode’ is its laser focus upon a darkly melodic atmospheric sound, stripped of its excesses.

Excess is a point of view inescapable, though, as the structure of ‘Blant svarte graner’ is again loosely followed with each side of the LP featuring a ~10 minute centerpiece that is placed for effect. Album closer “Illoyegd Foedt Som Satans Barn, Paa Ferd Uten Spor Af Menneskeverd” is perhaps more appropriately immersive while “Den Gang Jeg Banket Paa Helvedes Tunge Doer” blends into its surroundings, offering a small pool of respite near the mid-point. The full listen is somewhat droning if only for the fact that it is even longer than the previous album despite cutting out acoustic interludes and keeping extraneous ambiance to a minimum. My criticism of the experience is mostly relegated to a similar issue with the prior album, at least one of these tracks could have been cut and Djevel would’ve gained just a bit more impact within the full listen. In the moment the corridor seems to go on forever, in reflection it is an escalator I would happily ride again. That they’ve not created the same album twice at this fast rate of turnaround is the most appreciated aspect of ‘Ormer til armer, maane til hode’ as I become more of a fan with each release; As such I can give the same level of recommendation as I had last year in suggesting continued consistency of quality and vision. Highly recommended. For preview purposes I’d suggest “Et Menniskes Hele Korpus Og Legeme” is the go-to introductory single of the experience and “Det Eders Herre Lover Er Mer Enn Hva Mennikset Taaler” was my personal favorite track for its twinges of Kampfar-esque atmospherics. 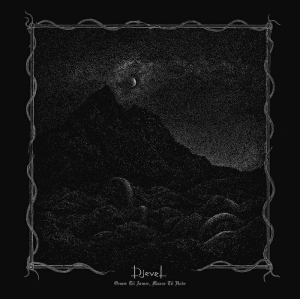