Winter comes as it pleases and the north sits a void of light entrenched beneath portals to blizzards that’d open uncontrollably in the always too-early season of the dark. Every measure of dry air, windblown skin, and soaked sock greets the leathered spirits of anyone still willing to practice survival away from the relative purposelessness of more habitable climes. Why persist within a challenging life when a most damning side-effect, a decaying monoamine uptake, blinds the soul to beauty and creates a creature of men the dark? The catharsis of shared subsistence is instinctual, to power on forward through impossible conditions and share in the scathe of it all is surely the basis for any long-standing and earnestly passed-on spirituality and the body has the chemicals to reward it. How else could folks explain the stream of consciousness that’d maintain the slow, sorrowful cult of dread and heavy rock, the church of doom metal. Kick the frozen dirt off, hang the soaked rags you’re wrapped in, and step into the steaming thump of writhe and ruin where the oldest traditions of 70’s guitar riffs have been passed onto the progeny of the 80’s and held up high into the present day thanks to sustained community and increasingly potent marijuana. More specifically and momentarily set yourself in the well lit visage of two decade, five album strong southern Maine based traditional doom-rock trio Ogre. This fifth album, ‘Thrice as Strong’, is not only a tribute to the enduring shared muse of the project but offers an opportunity to narrate strength among those adversely affected by the history of mankind’s addiction to power and the abuses resultant.

Descriptions, particularly those surrounding sub-genre specifics, by way of journalist and fan alike have been a point of ineptitude for the duration of Ogre‘s career as the broader picture of what characterizes 70’s heavy rock, heavy psych, stoner metal, ‘proto-metal’, and traditional doom metal splinters in meaning since the documentation of music history is so readily available; The monopoly on ‘guerrilla video as streaming music’ allows search engines to become revisionist and solitary research tools in an instant for the inquisitive today. In my mind Ogre‘s sound was always ahead of its time for how ‘retro fusion’ it was. A sound and style so cumulative of ‘Sabotage’ rock, its resurgence in the very stoned 90’s (see: ‘Trouble‘), and the old masters of 80’s doom who’d rode out of the 70’s unto innovation is the sound of ‘doom rock’ today and an enduring presence these last ten years. This combination of classic doom metal variant and riff heavy rock comes with great variation between Ogre releases where the early LPs would focus on what I’d consider traditional doom metal cognizant of the stoner metal/rock sound of the time; The template is something like Pentagram‘s ‘Day of Reckoning’ minus the mud of its late 80’s production and with just enough swagger to recommend to a Blood Farmers, Orchid, or Demon Eye fan. The flipside of this is a mid 70’s Ozzy-esque nasal vocal delivery that’d persist beyond the band’s third album, ‘Plague of the Planet’ (2008), offering an olive branch to fans of everything from Uncle Acid and Witchcraft to Fireball Ministry depending on how deeply ‘motorcycle rock’ they’re willing to go. As a traditional doom metal fan first and foremost I know how hard that doom/rock space is to keep interesting, especially when the sound design is given a ‘retro’ conscious feeling.

‘Thrice as Strong’ ends up feeling like a return to the ‘Dawn of the Proto-Man’ (2003) and ‘Seven Hells’ (2006) era of Ogre where one moment you could accuse them of being a heavy blues influenced stoner metal band and as soon as that observation hit your tongue they’d take a heavy detour towards a Saint Vitus/Pentagram style buzzing catharsis. It feels like a jump back towards that The Obsessed style and I don’t mean to suggest that they’d lost anything in the years since but ‘The Last Neanderthal’ (2014) now feels like a savage detour into darker, heavier territory by comparison. The NWOBHM wails and equally harmonized chorus of “The Future” sets a tone not entirely unlike ‘The Ritualist‘ were it performed by Witchfinder General circa 1983. “Hive Mind” eventually brings the doom in its second half and at that point I’m pretty much there again, enjoying this combination of doom and classic heavy rock that’d first grabbed my attention with ‘Seven Hells’ back in the day. So, why isn’t that enough in 2019? It is on some basic level a righteous guitar album full of nasal snarls and bluesy rock that’d make Pagan Altar proud but about half of the hooks on these traditional feeling doom metal/rock songs don’t find a home in my own riff n’ harmony obsessed mind.

Beyond the opening salvo “Judgment Day”, “Blood of Winter” and certain parts of the 90’s Trouble-esque “King of the Wood” hit all of the hallmarks of Ogre‘s high level of quality and purpose but a good quarter of the minutes counted only landed at first during the honeymoon listening phase. This paired with an album cover I’m not at all excited about had me delaying my verdict on this fifth record from the Maine trio for at least another 4-5 listens. Ultimately I’d end up liking the album but I am not yet convinced it’d created any motivation for numerous full listens beyond a deeper analysis of its moving parts. Ogre have hit their old standards in every aspect and ‘Thrice as Strong’ is powerful in concept and energetic in delivery and I only wish I’d connected with their songwriting beyond seventy percent of the time. Still, that is a pretty good scorecard and I’d give a moderately high recommendation for the experience; It doesn’t usurp ‘Seven Hells’ or ‘Plague of the Planet’ but you’ll still get your money’s worth and then some if you’re an Ogre head. For preview purposes I’d suggest starting with “The Future” and “Blood of Winter” if you’re a doom hound and then hit up “Big Man” for a clearer hit of their Sir Lord Baltimore kinda boogie rockin’ side along the way. 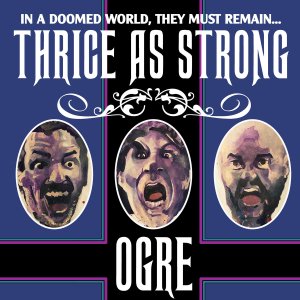