With admirable foresight a great mitochondrial division in 2003 would channel an ever-increasing flow of epic doom metal ideas that’d been consuming key members of Swedish metal band Forlorn into two entities; The first would grant puritanical Candlemass-graced epic doom metal unto Isole and all future viking metal ideologies would pour into the font of Ereb Altor. The mark of Quorthon‘s hand would persist within the early doom-centric works of both bands but the black mark would never wash from Ereb Altor‘s core. Here in 2019 it bears some reflection that this project has been mercilessly inspired and with no regard for trends beyond their own circle of distinctly Swedish black metal tinged viking/folk metal. The portent, an omen, this ‘Järtecken’ signals the coming Ragnarok as the eighth full-length from the band so clearly driven across this past decade. ‘Järtecken’ is a new height, a polished and varied mastery achieved through steadfast iteration– An admirably fresh peak for this institution of true viking metal.

The earliest works from Ereb Altor were not so purely afflicted with the atmospheric long-winded muse of later Bathory that most folks would discover with their signing to Napalm Records circa 2010, and in fact the 2003-2008 era of the band filled a niche so beautifully hidden from the hearts above ground; The viking/doom metal space is a thing of rare beauty where Scald and perhaps even early Solstice would dare find their challengers but Ereb Altor‘s ‘Awakening’ (2003) demo and debut full-length ‘By Honor’ (2008) are mountains fit for kings to rest within and joyous discoveries for lovers of all things epic doom/viking metal. I personally discovered this band due to longer waits in between Isole albums, wondering what they’d been so focused on. In working my way back from the indomitable glory of ‘Fire Meets Ice’ (2013) it was admittedly ‘By Honor’ that solidified my appreciation for the band though without any particular love for the works in between. ‘Nattramn’ (2015) was -the- album by this band until today, the quintessential uber-viking record that oozed the spirit of ‘Nordland’ from a field afar of folk metal’s early 2000’s boon; That album would also mark some stronger integration of black metal elements, some of which would reach for the sort of melodic death metal that is distinct to the realm of viking metal and shouldn’t indicate popular Swedish trends of the 90’s. ‘Ulfven’ (2017), their debut for the ideal home Hammerheart Records, would focus too much on aggression and trade away some of the atmospheric spirit of past releases. This spirit returns on ‘Järtecken’ but perhaps by way of a more fitting black metal oriented aggression.

“Avgudadyrkans väg” (The way of idolatry, more or less) immediately foreshadows a narrative of a son preparing for a ritual at the lake that leads to a possession by way of a sea goddess, which I would assume is Rán. Imbued with a curse and perhaps some power of the warrior Side A ruminates upon this possession before Side B alludes to the great final war and apocalypse, the final set of songs are particularly spiritual as the warrior (or main character) doesn’t for a moment see fate beyond what the ‘Gods’ would will. It is an almost complete saga and concept album but perhaps nothing entirely unusual for Ereb Altor, Side A feels particularly coherent though each of the two parts of ‘Järtecken’ have some measure of grand melodic statements to ensure their balanced halves: “Queen of All Seas” is immediately striking not only for its soaring harmonies but for some of the most polished vocal work from Mats (Christer Olsson) to date, “With Fire In My Heart…” elaborates on this tone in the third act while incorporating the broader range of vocal styles employed throughout the album as the first part of a grand 9+ minute finale. These moments can range from Borknagar-esque hooks towards pretty serious later Bathory worship. Each of these mid-paced epics have accompanying fire-branded burners in the form of “Alliance in Blood” and “Prepare for War”, essentially black metal attacks that represent the other extreme whilst “Chained” is a balance of viking/black metal elements. The only strike against the dynamic of the tracklist is perhaps “My Demon Inside” which is meant to be a grand peak of the first half but it ends up feeling a bit like a dated gothic/black metal song when taken out of context from the rest of the album.

After eight full-lengths it can be confidently said that Ereb Altor have reached a point of fidelity, thoughtful craft, and consistent interest representative of the time and effort put into their work. That is to say this is highly professional, memorable, and redeeming viking metal art that now finds an appropriate outlet for black metal aggression that eludes any description of ‘melodic death’ from the vocabulary of the observant. At this point I’d say it clearly surpasses the expectations (or ‘bar’) set by albums like ‘Fire Meets Ice’ and ‘Nattramn’ but doesn’t outshine every aspect of those listening experiences. I found myself listening to this record intermittently at first and then being drawn back to it for a few songs and then finally several full listens once I’d understood the full narrative experience. It grew on me slowly and then settled into a higher-middle register overall. Moderately high recommendation. For preview purposes I’d suggest that the album’s singles have been pretty well curated but I have to say “Queen of all Seas” and “Hvergelmir” completely ‘make’ the album. 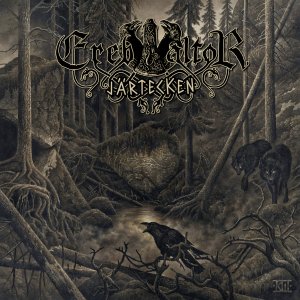