There were a few heavy metal/hard rock bands in Sandviken, Sweden in the early 80’s yet the number of notable metal bands out of the Gävle who’d entered the studio and recorded anything could be counted on one hand until about 1988 or so. Among them Diavox (later Arizona) were probably the first (more or less) but if you’re not into bands named after brands of telephones the choice was limited to “occult metal” band Sorcery who’d formed in 1986 and put together an ambitious 50 minute demo tape by the end of 1987 that was more or less first wave black metal crossed with thrash metal. It isn’t a moment in Swedish metal history that folks emphasize as much as similar triumphs from Mefisto and Obscurity, if only because they were heavier. The trip from that blackened thrashing Mercyful Fate-esque concept demo towards their best known item ‘Bloodchilling Tales’ is fairly well documented but rarely with any real reverence for the demos beyond a cursory spin. If nothing else, I’ll do my best to encourage revisiting these demos with fresh and wide-open ears. Hey! I’ve done my best to research as much as I can but please feel free to message me (grizzlybutts@hotmail.com) or leave a comment if I’ve left out anything vital or gotten something horribly wrong!

To start I’ll suggest that buying Hell’s Headbangers Records 2CD version of the ‘Unholy Creations’ (2014) compilation and then Xtreem Music‘s ‘Legacy of Blood’ (2013) remaster of the first full-length will net you an entirely complete collection of all Sorcery‘s material to date, provided you’re not interested in the original version of ‘Bloodchilling Tales’. The original drummer of the band and some interviews/books since have detailed the first steps of Sorcery‘s coming together as an extreme metal band but it’ll take a few educated guesses to get to ‘The Arrival’ tape. First, two members were in traditional heavy metal bands in the early 80’s which never recorded anything Curse and Acid Queen it’d make sense to assume these days were insulated from the darker thrash bands forming around them at least until the summer of 1986 when friends and relatives joined together to create this underappreciated and wildly ambitious ‘occult metal’ tape.

Merciless, Mefisto, and Morbid were all toying with these sounds with whatever level of thrash metal precision they could manage as young men but ‘The Arrival’ tape was one of the more complete thoughts at the time though I’d understand why folks would gravitate towards ‘December Moon’ and ‘Behind the Black Door’ instead. Satan is conjured, his wrath embroils the land, he births a son, and it goes from there narrated by a rasping but very clear narrative voice accompanying mid-paced blackened heavy metal. Well, this ends up being a very refreshing start while examining the history of Swedish death metal bands because I don’t have to simply draw a very tired line from Kreator and Slayer towards death metal, instead it is as if Bathory had created a King Diamond album without any sense of urgency and ‘The Arrival’ is still a fantastic listen 32 years later. 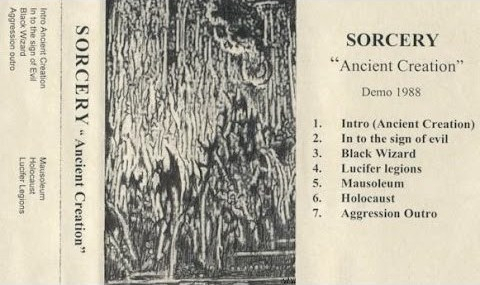 What was death metal in 1988? This for sure, even if it does appear to be a black/thrash record due to Ola Malmström‘s ranting hellish vocals and the rabidly thrashing riffs beneath his snarls. On par with Merciless thanks to a very brutal drum performance from Joakim Hansson and clearly stricken by the same surge of yet to be fully defined death metal of the time, ‘Ancient Creation’ is the first step towards truly extreme metal for Sorcery and hey, they fell in the pool head first. Death/black/thrash is the right descriptor for this demo, and it is such a fuckin’ buzzsaw to the brain and mercifully just about 20 minutes long. A shorter version with guitarist Peter Sjöberg (Mekong Delta, Theory in Practice) was actually recorded in late 1987 but original guitarist Fredrik Nygren would rejoin soon after so the version that was circulated was a re-recording from early 1988. As far as I can tell this was the first ‘professional’ tape form the band in term of being recorded on a 4-track deck. A song from the original demo is included on the ‘Unholy Creations’ compilation but the difference isn’t huge in terms of sound, the point of interest being that the track wasn’t included on the re-recording of the demo. This was the breakthrough moment for Sorcery and an incredibly violent burst of death/thrash entirely appropriate for 1988.

Well, no doubt shifting guitarist Paul Johansson to the drumkit changed Sorcery in a very profound way as the third tape ‘Unholy Crusade’ kicks things off with what is a flat and very predictable imitation of Death‘s first two records. Hell, the song is even titled “Death” so no bones about it really. I always saw this demo as if Florida death metal and Bathory‘s ‘Blood Fire Death’ held a bit of a seance. At this point it should be clear that the early days of Sorcery weren’t just pure death metal even when they were at thier most typical and the best analogue up until this point was Merciless until the pace became much more dynamic for Sorcery. I’m not sure I’ve heard a demo out of Stockholm/Uppsala area Sweden from the 80’s that used the drum patterns of early Death so vividly but I might be overlooking something obvious. This was the big sea change in the bands sound that would eventually become ‘Bloodchilling Tales’ but a run-in with Thrash Records is thankfully here to keep things interesting on the way there. 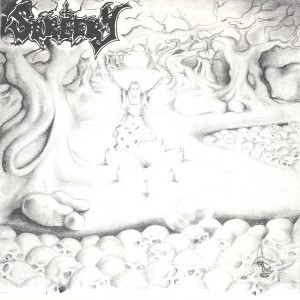 This isn’t our first rodeo with a limited edition 7″ single from French label Thrash Records who’d graced us with EPs from Revenant and Fatal that same year. To be sure these are collectors items because of how DIY the label was at the time and there was some inconsistency with each of their releases. This one has a very washed out, over-exposed depiction of the cover art. This was the first official release from the band and it came at a time where folks were hungry for Swedish death metal and it sold fairly well, creating enough buzz for the then brand new Underground Records to sign the band on for a full-length. I like this quite a bit as it reminds me of early Greek death metal complete with keyboards and pitch-shifted vocals for some reason although the riffing here is more along the lines of early Gorefest rather than your typical Swedish band. A small detour but still a significant release for the band. 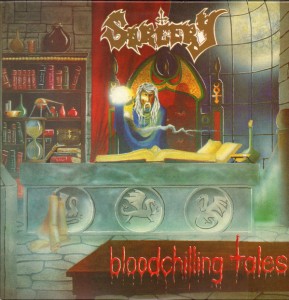 Up until this point Sorcery had been all over the place in just a handful of years, from blackened heavy metal to death/thrash and pure death metal so it was only a matter of time before they’d land in Sunlight Studios to record a full-length with songs from their second and third demos as well as the 7″ EP that’d landed them the gig. If you’ve been listening along the way you might begin to wonder why exactly the hell these guys allowed their sound to be typified by Skogsberg‘s team. I’d argue that ‘Bloodchilling Tales’ only really cedes the vocal style and guitar tone to the death metal of the time and I’d add that this is one of the worst and most unbalanced mixes to come from the studio that year. Although I might sound down on this record it is one of the most varied, eclectic, and brutal releases from this first wave of full-lengths from Sweden’s small collective of most elite extreme metal founders. So, tons of riffs and plenty of variation run amok between death/thrashers, mid-paced death metal, and well everything except the black/death/thrash ideas the band had started out with. Did this LP live up to its full potential? Well, I’ll let you make your own decision. It certainly didn’t seem like a great deal for the band as Underground Records have held fast on the rights to this album for decades leading to the re-release/remaster as ‘Legacy of Blood’ since. Skogsberg‘s remix/remaster isn’t great… far too bass focused for the subject matter, but it is the ideal way to experience the record.

At this point another key shift in line-up found bassist Micke Jansson and guitarist (former bassist) Magnus Karlsson-Mård had left the band and Sorcery‘s sound fully went in the direction of bands like Dismember and Entombed on this final demo tape before the band dissolved in 1997. The version you see in the photo was an approved release of the tape in 1997 that ended up being a rip-off by the person making the tapes. The band never received any money from ‘Maculated’. The version here includes a song from a compilation and that version is included in the ‘Unholy Creations’ compilation. If you’re a fan of classic and entirely typical Swedish death metal from the pre-‘Wolverine Blues’ era this is a fine example of that. It appears that ‘Bloodchilling Tales’ might not have sold well, or been profitable, and the band members had lost interest after some key founding members had left. The compilation song “Inhabitants of the Tomb” is the reason to listen to this tape and perhaps one of the better songs Sorcery had written up to that point.

Where to next? By the time (very underrated) black/death metal band In Aeternum were ready to record their first demo two members of Sorcery had joined the band and Paul Johansson would serve as drummer, guitarist and co-songwriter in the band until 2001. Not long after that Fear My Solitude, a long running gothic doom project between members would release their debut full-length then split up to form a more straightforward doom/stoner metal band Outremer. By 2009 Sorcery would reform and focus on a very consistent sound that has been more or less reminiscent of ‘Bloodchilling Tales’; They’ve released three full-lengths since with the most recent one coming out just a couple of months ago. Well worth keeping up with the band since although I’d say the oddities of their youth found in these demos are almost more compelling as a dive through Swedish extreme metal history.