The tongue-in-cheek that’d poke through a black hole of rotten face meat into whatever bitter taste responsible for that reaction is a dying art supplanted by the feigned nodding of the presumptive search-engine’d man. Sure, he surely knows exactly what you’re talking about in the moment and no doubt that list of keyword searches [that’ll round out his evening of avoiding eye contact with everything but big brother] is where actual learning takes place. Product learning, though, a memorization of incomplete summaries taken piecemeal and for the sake of aimless data collection. Where is the stinking breath of the fertile mind, too addicted to cognition to bathe or floss away his microbial undoing? The fanatical unholy scholar becomes todays sycophant in service to seriously anyone listening, anyone at all, any thumbs up available. He’ll waste an entire day and evening and half the nights sleep spinning in a daze of insatiable flitting between the three or four pipelines available on the internet… Trouble is the algorithm can’t evolve fast enough and the vehicle for its treachery only mutates under this limitation; Here he is? The deranged and exhausted husk feeling extra disconnected in the hands of Finnish noise rock and hardcore punk amalgamated shoulder-to-shoulder psychosis Kansakunnan Ylpeys. A second self-titled full-length, this time a ringing retro-futuristic cassette scrawled and finite and with just enough of a crack in the algorithm to breathe through the vents of our cages.

Its all screaming around me like a guitar store in the mid-90’s when everyone’s favorite long-hair had finally traded in ‘Jailbreak’ for ‘Nevermind’ and hell, maybe shoulder-lengthing it could work. The only relief is that sort of jazzy, funk-scratched Big Boys thumpin’ bassline of “John Lydon Go-Go”, a little joy beneath the oppression of the caterwauling ‘metallic’ sensibilities of Greg Ginn circa 1985-ish. A little honest four string thud goes a long way to reign in the scrambling scrape of “Arkuntekijä”, a glimpse of the brutality this Finnish noise rock duo employs just a hair’s turn away from early releases by No Trend or (especially) Scratch Acid. They’re everywhere and in every noise-capable hole imaginable but ultimately, this ain’t all that extreme– Just a great mix of post-punk movements, noise rock machine-gunning, and hardcore punk pushiness that’d make Laughing Hyenas‘ nuts drop out their old shorts. I’d love to suggest the full listen is as extreme as a Brainbombs record, just for the sake of discovering something completely unlistenable, but ‘Kansakunnan Ylpeys’ only goes a bit harder than The Jesus Lizard‘s ‘Head’ and about on par with ‘You Can’t Pray a Lie’. But way easier going down. Go a bit more punk and cut down on the harshed roars, you’re there already: Right on the edge of late 80’s noise rock in spirit but just as cuddled up with the adjacent Washington D.C. post-hardcore haranguing.

My blood pressure is through the roof and nothing could possibly be making this headache worse than the head-banging tension of this record but, on it spins, a fluid trap that wears me down 28 minutes at a time. At the risk of creating a pleasuredome out of masochistic auditory torture a look back at ‘Kansakunnan Ylpeys’ (2017) is warranted for perspective and to be sure the other self-titled record from this band, which had been optioned by Svart Records, is the teenager to 2019’s frustrated but flexible adult; No longer content to shout and bend under the weight of stand-and-deliver revisionist noise rock, I see Kansakunnan Ylpeys fully loaded with an incredible sense of spontaneity and a taste for feedback slinging amidst Minutemen-esque ditties reflecting a deeper compression of the self through boredom, flailing spirits, and absurdism. In other words, I loved this record even when I was sure it’d just about turned a migraine into a stroke. All I could do is imagine the aneurysm squirting not yet red blood throughout my hardly wrinkled brain. I’m all for it, start to finish a harder-than-thou noise rock album that shakes your goddamn nonsense in your face and doesn’t start laughing ’til you turn your back. Highly recommended. For preview purposes I’d suggest starting with the gorgeously balanced rhythmic climb of “Vuokratalo” and the sheer finesse of the guitar lines that characterize “Metsässä ei kaiu”. 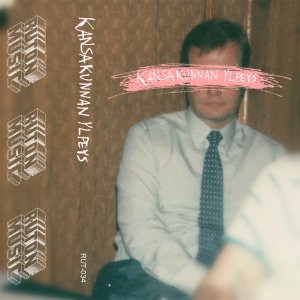