A bludgeon to the jaw of a fiend devouring the blender-mushed genitalia of its victims from their inception Baltimore, Maryland hack n’ slashing brutal sometimes-slamming death metal act Visceral Disgorge appeared as a sort of anomalous entity of hyper womb-centric gore revulsion set to a crossing of puritanical early 2000’s brutal death that chose carefully among influences from the newer waves of throttled slam and deathcore that came beyond 2005. Their debut ‘Ingesting Putridity’ (2011) was popular for the most classic reason imaginable, they were a solid live band… Well, that and they’d nailed the appropriate snare sound, a tenet of good vs. great modern brutal death. You might look back today and see a foul and fucked up attack upon the reproductive organs set to trendcore but, their name rings a bell here eight years later for good enough reason. The follow-up, ‘Slithering Evisceration’, arrives a few generations removed and with an almost entirely refreshed line-up that still manages a natural evolution of the Visceral Disgorge sound.

Straight up I didn’t go nuts for ‘Ingesting Putridity’ back in the day as I’m not a fan of the door that deathcore opens for some of the worst live bands I’ve ever stood through and frankly it didn’t make sense what made the band notable at the time solely because I was always resistant to the modernization of brutal death. No need for any of that tired sub-genre conservatism these days, getting exactly why a band like Visceral Disgorge is a big damn get for the slam crowd isn’t a complex bout of reasoning: Shit hammers everything around it to bloody paste and that’d dawned on me seeing the band a little over a week ago in Seattle for the Bloodletting North America XIII tour, more or less co-headlining with the indomitable Disentomb. A long night of skull-fracturing cutting edge brutality would’ve been a flatline for me back in 2005 when I’d fallen off of the week-to-week of the sub-genre but Visceral Disgorge sold me then and there as they punched out a performance leagues beyond expectations I’d held onto since ye olde second coming of brutal death. Point being that I ‘get’ it now more than ever and while I don’t think I could sit through an album much longer than a half hour anymore they’ve actually set ‘Slithering Evisceration’ at almost exactly 31 minutes.

Breakdowns, nuclear drops, and all the big-hulking signifiers of slam are compressed through Visceral Disgorge‘s new blades, guitarists Steve Miles (ex-Severed Head) and Charlie Marvel (Bury the Memories) who’re serving to fill the void after most of the former Eaten Alive members left the band in 2013 and beyond the passing of original guitarist Steve Rosenzweig. The vision is upheld I’d say and probably with more of a focus on the pure brutal death and slam dynamics of today rather than the deathcore side of things. They’ve got riffs that’ll at least shake the blood in your guts on first listen but I’ll be honest I stuck on this record because of Bill Denne‘s drumming and the mix isn’t shy about giving his always-nuclear snare the major point of impact. For all of the sci-fi body horror and space splatter the lyrics convey it was the drum performance on ‘Slithering Evisceration’ that’d scare the skin right off of my skull like a shotgun blast. No deep thoughts or much else to tease out on my end– A good companion to recent Devourment and Disentomb releases with a hint of that overblown Russian slam grime (Abominable Putritidy, earlier Katalepsy) creeping in at the edges. Moderately high recommendation. For preview purposes I’d suggest starting with “Architects of Warping Flesh” and “Necrotic Biogenesis” if you’re a 2000’s brutal death baby who needs big riffs, and “Saprogenic Deformation” for a look at the full spectrum of what they’re doing on the full-listen. 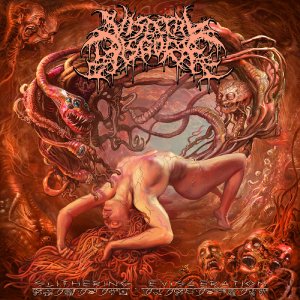