Flaying rotten flesh from enchanted skeletal fingers the first fist of a hundred plunges through the fetid, dank hiding place for the worm-ridden ‘savior‘ who’d been freshly buried in slashed and spear’d form. The horror of the noise, a din of cracking bones and crumbling rock, from every angle frightens not the corpse lain upon a slab in the center of the tomb. He is eternally dead. He never would have risen yet the sorcery tunneling towards the False One‘s place of rotten rest intends to ensure no corporeal speck remains of the fabled empath. O’ the splatter of these barbarian skeleton arisen, revolting in their hammering of one arm held as a club in the other, as they make quick paste of the supposed creator’s kin ’til even the anaerobic worm and rotten bacterium are burst down to their very cells. Anxious in their quest to defile pious corpses further these monstrosities fling open the stone entombment and set upon the cradle of all humanity with bloodied bone-fists and shrieking crystalline eyes. A shatter of glass and an incantation whirled topples the warriors in service to the necrotic defiler of the ‘Christ’, an alchemist and a ghoul-conjurer in defiance of the easily swayed masses. Bottling the paste of the ‘lamb’ and poisoning the tomb, the tone for the coming war against piety is set alight. From those ancient fires burns an on-raging sect of diabolic shaman in the depths of San Vicente de Tagua Tagua, Chile persist and stoically thrive under the name Slaughtbbath. They of vitalized black/death traditions burn at a rate ten times their peer as these highland destroyers unleash their second full-length sized opus ‘Alchemical Warfare’ here in cataclysmic 2019.

Though you’d be astute to suggest there are many bands similar to Slaughtbbath today, those that focus on equal measures of black, thrash, and death metal influences in creation of brutal and high friction black/death metal on the cusp of war metal noise, but when they’d kicked into gear back in 2002 this wasn’t necessarily yet such a refined middle ground between said compatible sub-genres. There is no denying that compatriots Perversor, Force of Darkness and to some degree Hades Archer each have a similar glint in their eye that suggests indomitable riffcraft and blackened ultra-violence in performances yet Slaughtbbath remain distinguishable from their Chilean brethren even today thanks to uniquely propulsive battery and a raw chainsawed  approach to thrashing death infused bestial black metal. That violence must initially stem from early Sarcófago on some level but ‘Alchemical Warfare’ resembles a refinement of something more advanced in its blasphemic mayhem, closer to Bestial Mockery‘s ‘Christcrushing Hammerchainsaw’ crossed with the overblown death-howling righteousness of Sacrocurse circa ‘Gnostic Holocaust’. Most would find Force of Darkness a close enough comparison but I find ‘Alchemical Warfare’ slightly more classic ‘brutal’ thrash-minded in terms of composition. You wouldn’t be far off considering early Necrophobic (see: “Ascension to the Dragon’s Throne”) either, but clearly Slaughtbbath are much more in line with the black/bestial machine beyond their stronghold in the south.

The first thing you should notice upon firing up “Ritual Bloodbath” is just how unstoppable this brutal storm of an introduction is and that the pace keeps up throughout; From the descent of the introductory riffs towards the screaming solo that kicks the song off it becomes clear that ‘Alchemical Warfare’ finds the band focusing on razor-sharp blackened thrash duality with their stripped down yet entirely full sounding approach to ye olde bestial attack. The style of the band remains riff-driven throughout. As the tracks blow by, it is clarified that Perversor and Slaughtbbath are on a similar level of speed and intricacy despite offering relatively unique takes on the black/death/thrashing front simultaneously. Vocalist/bassist D. Desecrator is the linchpin here as he delivers an even more animated and blasphemic performance compared to the seemingly unconquerable ‘Hail to Fire’ (2013). Songs like “Prophetic Crucifixion” have all the more power behind them because of how consistently frantic the energy that the band brings is but, it is the slower pyre-burn of “Rejoined Into Chaos” where I began to see ‘Alchemical Warfare’ as more than just another good/up-to-par release from Slaughtbbath. To be fair the standards were fairly high to begin with and the six year wait between records had become daunting.

The legacy and the vitality of this well-regarded band remain not only intact but doubly egregious in their blasphemic assault today. I’m not sure I’ve heard a black metal song as goddamned throttled and thrashing hard as “Celestial Overthrow” this year, save maybe Ares Kingdom‘s record, and that song alone is worth a full listen; Even better when paired with the adjacent finale of “Ascension to the Dragon’s Throne”. I sure as hell feel like I’ve gotten my moneys worth buying an album like this that manages to impress back to front without a shred of front-loaded nonsense imbalancing the weight of this fine Slaughtbbath album. That well-considered consistency is a mark of pride for the band and shows they’re not just cranking out quick, under-baked shit like so many other black/death bands are today. Highly recommended. For preview purposes I’d suggest starting with the pairing of “Ritual Bloodbath” and “Rejoined in Chaos” for the first two big peaks of the record while making sure not to miss my favorite track, the witching death-thrasher “Celestial Overthrow”. 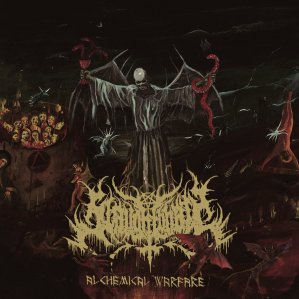