Heavy metal history has long cemented the ‘old school’ thrash metal fanatic as a (nearly) infallible impetus for the most well-remembered and received death metal of our time but to see the forest for the trees in this sense isn’t always a conscious decision. On paper it’d seem like a casual enough choice to sit down and write a set of ‘old school’ death metal songs, surely even the most uncultured teenagers have written classics… Yet in the hands of veterans, lifers, the deployment a set of experienced professionals ensures the neurotic attention to detail that death metal thirsts for as an energetic and oft defiant music. In more straightforward terms, the ‘spirit’ of death metal is bound to the traditions of the esoteric and not just plain techniques repeated ad infinitum. It matters less than a fellow bleeds metal blood so much as it is a weird humour that’d differentiate from the ever-chunking hordes of participation. Lower Saxony, Germany adjacent musician Markus Bünnemeyer’s (Thrashhammer) rather casual sounding advent of death metal project Temple of Dread nearly undersells the ferocity within: He simply wanted to make ‘old school’ death metal and began collaborating with a close friend Frank Albers (for lyrics) and would soon employ his former Slaughterday compatriots Jens Finger (ex-Obscenity), who provides vocals, and  Jörg Uken (Nightfall) who provides drums. The results are as violent as they are classic and the odd edges that shape ‘Blood Craving Mantras’ appear to persist by the will of taste and their respective personalities alone.

From the start ‘Blood Craving Mantras’ was cut from a different cloth in terms of lyrical focus as all prose was written by a psychologist with a dark sense of humor and set to death metal created by a fan of all things thrash and death; Likewise Temple of Dread immediately conveys that ’92-’94 era of death metal, where small niches of German metal would apparently discover psilocybin and cannabis, through a few relatively unexpected flourishes. That isn’t to say that this is a spiritual sequel to ‘Symphonies of Spiritual Cannibalism’ but without that slight exotic/exploratory edge the album might begin to sound too closely stabbed at the heard of early Cancer and Pestilence otherwise. The Death influenced rasping death/thrash of ‘To the Gory End’ and the percussive wallop of Marco Foddis-era Pestilence only just begins to describe the instantly felt aura of ‘Blood Craving Mantras’ as a harried and exaggerated set of ‘old school’ death metal songs. That early glow comes from a sound that has been ‘done’ but isn’t done often, the realm of Morgoth and Asphyx pre-1993 steamrollers. These are more or less the most obvious constructs informing the record as a whole but there are nods to Autopsy, Dark Angel, and an array of solid thrashing riffs throughout this fairly succinct debut LP.

The most fair criticism I could lob at ‘Blood Craving Mantras’ is probably that it creates too much of ‘middle ground’ between a very standard set of fast and ripping ‘old school’ death metal songs and ‘out of left field’ ideas. The ‘Scream Bloody Gore’ feeling that emanates from Side A is a invigorating as it is familiar and this ends up being a double-edged sword in terms of memorability as Temple of Dread appear standard at a glance but are uniquely achieved in the details. Side B is surely more attuned to both what made Morgoth notable back in the day and with hints of classic thrash and a Deceased (maybe Thanatos?) sort of feeling thanks to the vocal style Finger employs. This is where I’d start to compare this project to Slaughterday in some respects, a band that has a lot of brilliant ideas but acts in service to the altars of old school death first– Not a negative aspect but a certain type of flag is waved nonetheless. The death metal fan will see the depth and the casual peruser will ‘file under osdm‘ and mentally check out; This is no failure of Temple of Dread and only emphasized on my part for the sake of positioning ‘Blood Craving Mantras’ directly in front of ‘old school’ death metal fans who’re in tune with the late 80’s/early 90’s thrash-connected death metal world and the few bands that keep those rhythms alive beyond aesthetics.

The first single from ‘Blood Craving Mantras’, “Gone But Still Here”, acts as a facelift for Side B and a powerful standout on the full listen for exemplifying every strength Temple of Dread bring with this debut. That ranting ‘Time Does Not Heal’-meets-Van Drunen vocal with a blazed-through set of thrashing death metal riffs (and a very ’88 Schuldiner solo) is an all-systems-go moment for the band that’d pulled me back in for full listens most often. With some closer listens plenty of similarly inspired details reveal themselves but there are a few droops that balance out the highs along the way. Well, the only song I’d ended up skipping across many listens was “Straying the Battlefields” as the weakest moments within ‘Blood Craving Mantras’ come when a sort of modern Asphyx/Hail of Bullets affect creeps into the songwriting; This track also brings up the buried bass guitar work that muffles some interest on my part, an interesting choice as Thrashhammer really benefits from a bold bass presence but I’d understand how it might take away from the brutal old school feeling of certain songs.

The full listen is bracing start to finish and will immediately resonate with folks who’re in tune with Europe’s next step up from Florida death metal’s influence in the very earliest 90’s. Temple of Dread arrive professional, thoughtful, but ultimately a puritanical tirade of thrashing old school death metal that’ll please their (our) people first and foremost. I’ve no qualms with the full listen though it did feel one dimensional as an experience though that’ll come down to a preference for the project’s more obviate influences. Highly recommended. For preview purposes the two singles released by Testimony Records (“Now You Will Die”, “Gone But Still Here”) are good curation thus far and the only track I’d throw in the mix is the opener “Suffocate the Fire” because it has some of the wilder solos and a wild vocal performance that set the tone for the record perfectly. 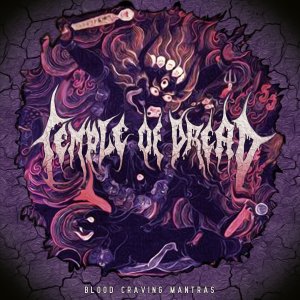