Insanity have been my favorite (heavy metal) band since first hearing the re-recorded version of “Rotting Decay” on a reissue of ‘Death After Death’ in 2001. Say what you will about the soulless, desperate piracy on the internet today but, jumping on my dial-up modem (with an old family computer from 1997) back in the day provided a paradigm shift that changed my life. That shift saw me with the tools to take control of my own taste in music. But this isn’t about me, or the damned internet, rather -the- premiere band that would add true extremity to the passage from brutal thrash metal towards death metal in the mid-1980’s. As talented as Slayer or Possessed but perhaps even more intrepid technicians the original line-up of Insanity were young men on a mission to be the most extreme thing anyone had ever heard and if you roll back to their 1985 demo and compare it to what the rest of the world was doing, they were not only one of (if not -the-) first true death/thrash acts but an original. Twisted scale runs and tightly composed songs had the explosivity of technical thrash metal but the brutality of the grindcore they’d be a big part of influencing thanks to heavy zine and tape trading involvement early on.

However you want to retell a history told a hundred times that’d fallen on deaf ears over and over: Sudden death, hardships, label issues, and a host of personal issues kept Insanity from making their mark above ground. Here where I differ from the writers who pine over what could have been: Insanity landed in exactly the right spot, as underground death metal legends. Yeah they persevered through a host of tragic shit, like so many other bands on this feature, and it took decades for their (largely self-recorded/produced) legacy to get any respectful collection and reissue but… it happened. Hell, we finally got a second full-length nearly two decades after the ‘Sacrefixion’ (2001) EP  and they hadn’t missed a beat since 1993. Where other see tragedy and hardship, unfulfilled destiny, I see a legacy that belongs to the fans who are intrepid enough to dig for the good shit and wave it like a bloody flag when they’ve got it. Hey! I’ve done my best to research as much as I can but please feel free to message me (grizzlybutts@hotmail.com) or leave a comment if I’ve left out anything vital or gotten something horribly wrong! 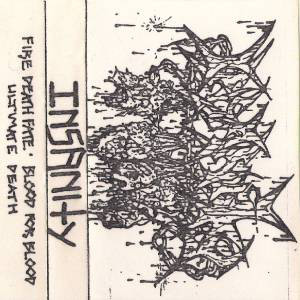 The original version of Insanity‘s self-titled demo tape features three of their better known songs each of which had been initially composed by original vocalist/guitarist/co-founder Joe DeZuniga and guitarist Dave Gorsuch. If you’re anticipating me digging deep into the history of this band I’d rather direct you to the very detailed interview with Gorsuch from Voices From the Darkside where they touch upon the entire history of the band with much attention paid to the early days. DeZuniga was a talent both as an artist and a composer with a demented enough side that he’d provide enough of an impression upon Gorsuch that he’d stick with the band to this day, unfortunately DeZuniga would die from a heart problem in 1987, shortly before an offer came in from a ‘major’ label. This tape provides a clear look at the vision for the band which was probably even more brutal than some of the more technical material that would come after it. This was cutting edge in 1985 and it has been famously influential as folks look back upon innovators on a crowded world stage. Death metal was on the tip of the tongue for Death, Slaughter, Morbid Angel, and a hundred more bands of the era but it was Insanity who got it right immediately.

You’ll have to figure what the differences were here in ’86 from the original tape and whether or not the unfinished extra tracks are worth talking about. This is listed as a rehearsal but the first three tracks are just about identical to the first tapes in 1985. The extra tracks are well worth a listen but only if you’re looking to soak up as much of DeZuniga‘s style compared to how the band would change after his death. Black Lung also put out a second pressing of this tape that same year but it was entitled ’85 Live Demo’. The best version of this point in time is the ’86 Rehearsal tracks on the second disc of the ‘Chronicles of the Cursed’ compilation from AreaDeath productions.

Two years after their founding guitarist/vocalist had passed Insanity went ahead with their vision and original drummer Bud Mills had left in the meantime. Vocalist Bob Martinez and drummer Tim Tallerico would join and Martinez would be the voice of the band until 1993, his register was much more in the realm of thrash metal of the day and it seems as if Gorsuch was never completely satisfied with his performances as he’d take over on vocals and re-record the debut in a couple of revisions. Here in 1989 it was clear they’d been struggling writing songs that’d entirely fit with DeZuniga‘s compositions but the only real outlier here was “Submission to Fools” aka “Submission” which wouldn’t make it onto the debut. This wasn’t Insanity at thier best but I’d say Martinez did a great job filling the void at the time and Insanity still sounded like Insanity. This tape was already album worthy, or nearly there, and it’d get them signed to up-and-coming (but soon to crash and burn) Mangled Beyond Recognition Records out of Germany.

Here it is, my personal favorite death/thrash metal record and all things considered it was at least four years too late. Written between 1985-1991 and perfected over years of waiting to be noticed on a greater scale ‘Death After Death’ was the absolute personal best from a band that had to start from scratch in terms of collective performance and tightness a few years prior. Famous as it is for being a relic for sounding like a 1988 death/thrash band at death metal’s first creative peak in 1993 what really matters here is just how well the full listen plays. Each song is distinct, technical, brutal, and memorable above all else. Still, nothing about this original version would sit well with the band. To start M.B.R. Records went under (taking down [the good] Crematory, God Macabre, and Malediction in the process) and it appears Insanity would re-record the vocals to not only sound more ‘death metal’ as intended but to put out a new version on their own label and get it out there DIY after the fuckery with M.B.R. That second edition, with a different track order would release through Black Lung Productions and famously include death vocals from guitarist Dave Gorsuch: [‘Death After Death’ 2nd version].

A third version, and for many the definitive version, came in 1998 as a reissue with the re-recorded vocals and now some updates to the rhythm/lead guitar tracks as “Death After Death (After death after death)” again on Black Lung Productions. The original M.B.R. version was put out (on vinyl) by Hell’s Headbangers in 2013 and I’d say that is really where you need to start; Sure, the third version of the record is the ‘best’ in terms of capturing the most clear and heavy representation of those original ideas but I personally like the Sadus-esque vocals the Martinez brought on the original compared to the revisions with Gorsuch doing the growling. The songwriting for what would becomes their 2015 full-length ‘Visions of Apocalypse’ would more or less begin in 1994. The band would split up that year and eventually reform in 1997 but it has been off-and-on since due to death and insanity beyond that point. They’ve persevered in one form or another through various spurts of public interest and I guess that should be just as inspirational as the incredible volley of riffs that are flinging in any given moment no matter what release you start with. Although I’d like to detail the the years of waiting for a follow-up to the fantastic ‘Sacrefixion’ EP, and how well original sound of those songs were preserved on ‘Visions of Apocalypse’, the main goal this time around was to prime the pump for getting folks into Insanity and suggesting the importance of their demo and various versions of the debut. At the very least read the interview I’d linked while you listen to the original version of ‘Death After Death’.