When the trembling stops and you’ve cursed your coming last breath only one last act of defiance remains: To let loose the blood-drenched arms that grip your guts in place and fling your flayed entrails upon your aggressor. Sloshing blood and bursts of rotten gas wet their eyes and leave smoke-damaged lungs gasping with a vomitous heave. A lasso of pink and dull yellow meat flops before you — juicing its mucosal proto-fecal spew like Play-Doh from the corporeal you. Frantic screams of horror from those you’ve soiled with your innards’ scum will be the only choir of angels heard as you die slow, anemic and in shock. Lie there in the mud and begin the long, joyously bubbling ache to come; Dead eyes witness and feel nothing under the anesthesia that comes with the process of decay by way of death metallic projection. A forest floor, a swamp, a bog, a drying river or a rotten too-shallow stream are all luxuriously wet resting places beyond the ‘Cessation of Life‘ (2018) experience here in the pacific northwest where death creates a nigh erotic anticipation for the rot-loving moisture and rich array of molds, parasites, bacterium and scavenger ghouls that’ll devour the blankly staring dead. The heat, the sour taste of the air, the horror and the smell coalesce into a fog of primally disturbing atmosphere, an exactly right setting for the torturous bellows of ‘Odious Descent Into Decay’ the debut full-length from whom could rightfully be considered a high watermark for the grime-ridden primitive future of death metal in the western United States, and certainly in the Seattle area, ah via Cerebral Rot.

Whatever spin you might set upon the silvery spore-ridden moldiness of this fine death metal record to introduce its personnel, no piece of information could be less misleading than the impressive list of current and former grindcore and ‘primitive’ death metal projects each band member has been involved with across the last decade or so. The musicians within represent some of the more driven old school death (and grind) metal fanatics active in the burgeoning pacific northwest today and though some find themselves crossing towards the Portland, Oregon border for the sake of various projects, Cerebral Rot is generally formed by way of Seattle’s sprawling congestion. Cauterized, Caustic Wound, and Crurifragium might not be on your radar just yet but chances are if you’ve landed upon this review Fetid will be a recognizable namedrop. Consider this a pretty decent analogue of what’s up in Seattle compared to how Witch Vomit‘s line-up represents something similar for the Portland area. The point? Cerebral Rot is impure and primitive death metal from the minds of folks who have shown equally good form within grindcore projects and ‘old school’ underground death metal worship that unavoidably aligns with fine taste in obscure Scandinavian export beyond the grand revelation of ‘Symphonies of Sickness’ and ‘Severed Survival’ therein.

If you’re already well familiar with the ‘Cessation of Life’ demo from 2018 you’ll have a crystal clear idea of what to expect on this full-length in terms of grotesque sound and death metal style. I found gratifying the realization that, as I soaked this album up into every willing pore of my being, there was no jarring stylistic jump or last minute sea-change that preceded Cerebral Rot‘s debut full-length; They’ve delivered exactly what the demo had been pushing. Some expansion and modulation occurred in the sense that the fidelity and arrangements receive deeper layering and any previously heard track is enhanced but, not grossly polished. If you loved the curious age of early Finnish death metal that was heavily influenced by Carcass in the late 80’s then you’ll understand why the style of this album is so compelling, they’ve nailed the twisted crawling riffs, the bursts of blasts, and the sort of guttural doomed churning that recalls the earliest pre-album works from Vomiturition, Xysma, demo era Afflicted, and to some degree Phlegm (United States). The cyclical grind of it all should resonate with classic grindcore/death metal crossover fandom without actually ever falling fully into grindcore (or ‘gore metal’) itself. The standout moments that pushed Cerebral Rot over the edge of greatness for my own taste came with occasional death/doom-esque refrains that provide powerful, lunging riffs a la Cenotaph‘s (Mexico) debut or more closely, Gorement‘s pre-LP heaviness (see: “Primordial Soup of Radioactive Sewage”). Who Cerebral Rot might remind me of isn’t the primary reason that’d make their debut interesting in the long run but, rather emphasizes how they pummel the ear throughout this fantastic 45 minute death metal album.

There is no revolutionary idea here and certainly nothing ‘forward thinking’, boundary pushing, or even particularly ambitious about ‘Odious Descent Into Decay’. In context that is to be assumed from their associations with other/prior projects and falls in line with the general millennial death metal corpus of today. Mid-paced, grinding, bellowing death finds its ‘pocket’ in moshable riffs that I personally associate with albums like ‘Necroticism: Descanting the Insalubrious’ and post-debut Impetigo where heaviness and finessed drum performances are simply achieved but full of equally memorable and moshable ideas. “Swamped in Festering Excrementia” is an immediate standout for its lead guitar squalls and hooks but the majority of the album falls upon rhythm (not lead guitar flourish) focused patternation and techniques that showcase a good variety of structures using those same grind influenced early 90’s death metal sounds. The variety in question is technically a matter of variation by way of specialism rather than a wide swathe of influences and this likely puts back to rest folks who are exclusively out for the blood of something bizarre and unheard of. For my own taste anytime Cerebral Rot ‘drops’ into the heavy Finnish death metal attack that characterize this album I’m a thousand times re-sold on the whole thing. The subterranean depth charge of the riffs offer a huge nostalgic draw initially but ‘Odious Descent Into Decay’ is a worthy listen even if you aren’t yet hooked on certain classics of pre-1990 old school death metal.

Cerebral Rot‘s debut full-length is dark and putrid, a disgusting splatter of prose that’d worship filth and shit as they narrate human decay and they’ve thankfully created an exemplar ‘classic’ death metal sound that recalls the blurred line between death and grind enjoyed in the late 80’s and early 90’s. I was probably sold around the first growl (1:53 minutes into the title track) and have remained enthused by this release for the last several weeks. At some point I did want more variety in general and perhaps more emphasis on death/doom tangents but it’d be fair to say that the Seattle area is already pretty packed with groups that explore that sort of cave well enough. By the time I’d even begun to nitpick and analyze ‘Odious Descent Into Decay’ I’d probably heard it upwards of 20-25 times and at that point it was out of objective duty and had nothing to do with my own personal enjoyment of its mucous-slicked hallways of gore. There are redundant riffs that pop up as the album comes to a close but those moments never lose their appeal so, I can’t say any one part of this album doesn’t belong in the fray but clipping five or six minutes off of this album would have been the sweet spot. I loved it, ate this shit up and wanted more even when there was technically ‘too much’ of it so my recommendation might be higher for folks who saw those earlier name drops  with some excitement. Otherwise, a generally high-as-fuck recommendation for the average death metal fan. For preview purposes I’d suggest “Primordial Soup of Radioactive Sewage” and “Swamped in Festering Excrementia” are my own personal jams on the album but the fully correct way to get to know Cerebral Rot is to start with the title track that kicks things off. 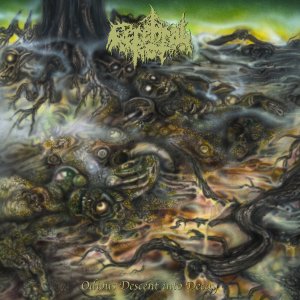 Leave a Reply to Metal of the Month: August’s Finest 15 Releases (2019) Cancel reply