If you’re among the short-sighted research avoidant lazy bastards who believe death metal was born by chance in some dudes garage in the middle of Florida you’ve probably never spent more than a minute figuring where the blueprints for it all came from. Slayer is the place to start, for sure that logic sticks as they translated evil NWOBHM into actual aggression and primordial intricacies for death metal to come but you’d have to dig deeper to find the actual proto-death metal rhythms that still guide the genre through successive generations since and well, sure start with Hellhammer for a sense of primitive origins but where I see actual bonafide death metal sans thrash metal’s hand landing upon serious rhythmic gold it’d have to be Toronto’s Slaughter. Sure let’s not discount Mantas, Insanity, Pentagram (Chile), Messiah and a handful more fellows pushing limits hard as they contributed to the whole but what has truly lasted as the backbone of death metal today definitely owes its dues to the incinerator. The most fitting description of what Slaughter always brought to the table is exemplified by a look at their ‘mascot’, a mohawk-sporting skeleton punk with a bloody chainsaw; They were punk as fuck from the start with horror in their minds and a barely reasonable grasp of their instruments but man could they hold down a power chord and find a memorable groove. This entry will be a little bit different because one could fairly argue that Slaughter were never a ‘death metal’ band by any true definition but I’ll make that argument when it becomes relevant to the bands discography. Hey! I’ve done my best to research as much as I can but please feel free to message me (grizzlybutts@hotmail.com) or leave a comment if I’ve left out anything vital or gotten something horribly wrong! 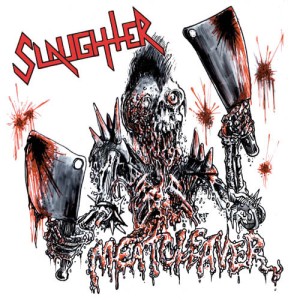 As far as I know this ‘Meatcleaver’ rehearsal demo was never widely circulated to zines or labels and it was instead an archival basement rehearsal that’d been officially released for the first time on a compilation entitled ‘Tortured Souls’ (2007) via Marquee Records. I’ve found that 4CD set particularly rare but thankfully there have been some official releases containing the entire ~34 minute rehearsal. Seeing as how Slaughter had just formed they definitely sound like a band that likes Slayer but might’ve been more capable of stuff like Hellhammer and Discharge. In some ways this recording shows Slaughter as contemporaries of many bands considered ‘proto-death metal’ but I don’t think they’d have been seen as anything other than a very dark punk band. I’ve always gotten a heavy dose of crust and west coast US hardcore punk from the earliest Slaughter recordings but the intent to play metal is abundantly clear. 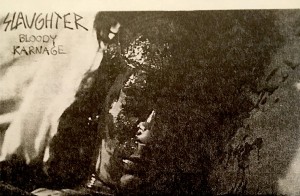 Here the ruptured sound quality cannot hope to hold back the catchy and damned groove-ridden attack of the band on their first official demo, ‘Bloody Karnage’. The pairing of ‘Disintegrator’ and ‘Incinerator’ is probably the most distinct moment from the band’s early years but many of Dave Hewson‘s (vocals, guitars) would live on with equal infamy as they’d reach better known demos and records. Although this tape still featured the original line-up it was clear they’d put in regular practice since the ‘Meatcleaver’ tape had been recorded that same year. This was a big moment, but (arguably) not -the- big moment just yet where Slaughter really hit upon genius level rhythms. The sound quality on ‘Bloody Karnage’ is rough at first but I think you’ll find the more noise and chaos this band were working with the heavier they sounded. 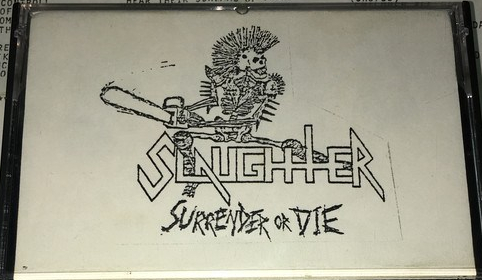 In April of 1985 Slaughter released two tapes, the first was ‘Live Karnage’, a recording of their first live show ever where they opened for Sacrifice and played most all of their material up to that point along with covers of Hellhammer and Venom classics. Big deal! The ‘Surrender or Die’ demo was where shit (and blood) hit the fan for Slaughter and their trench-heavy death/thrash/punk really came to life. I won’t say that ‘Surrender or Die’ changed my life when I heard it but, it did energize my exploration of metal early on after bands like Cryptic Slaughter and Terrorizer had gotten me to take thrash and death metal more seriously. No doubt the copy I’d been given was a bootleg and missing a song or two on Side B but it was nonetheless a recording that forced my hand beyond hardcore punk/crossover into extreme metal territory. 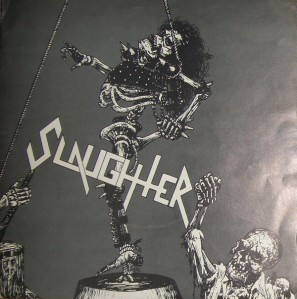 With the momentum of a full-length on the horizon for the band their ‘Nocturnal Hell’ 7″ EP in 1986 probably wasn’t meant to make the waves it did but as you’ll quickly realize when firing it up the sound of this EP directly contributed to the signature sound of Scandinavian death metal and particularly that of Carnage, Dismember, Nihilist, and their kin to the cosmos. If this was all you’d ever heard of Slaughter you’d think they were some kind of fuckin’ time travelling death-lords who’d figured out the future years before it’d hit. They weren’t necessarily aiming for that, though, and at the time Slaughter were more concerned with making up-to-par extreme thrash metal and not necessarily focused on creating the next wave of anything. Just about 50 bands rip off the intro riff to “Nocturnal Hell” every year some reuse it across the span of entire albums. 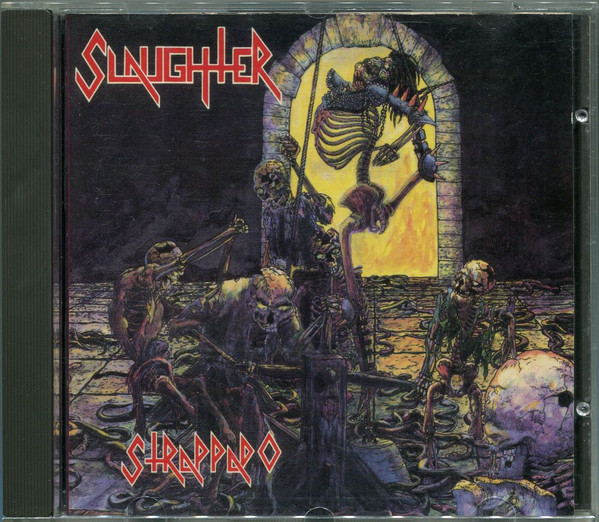 When folks poo-poo reissues of albums and snub anything that isn’t the untouched ‘first issue’ of recordings I always get kind of pissed off, at least internally, because if it wasn’t for remasters and reissues of classics whole generations would miss out of incredible releases like ‘Strappado’ which was very limited by its original Fringe and Diabolic Force Records releases. I wouldn’t get to hear it until Nuclear Blast released a remaster in 2001 and there I was a fan for life. ‘Strappado’ is ultimately a death/thrash album from a band that could write songs as catchy as TSOL or Discharge but as heavy as Celtic Frost or Dream Death (both that same year). Fill in the blanks for yourself with more appropriate heaviness but, you’ll understand what I mean from the very first listen. The success of this album isn’t just its massive buzzsaw sound but the catchy, headbanging songs they’ve written for it. ‘Strappado’ was more or less what Slaughter had been working up to since 1984 and after its release in 1987 it must’ve been a tough road without a major payoff because the original drummer would soon leave and two new members would join. This record more or less makes the argument for Slaughter’s inclusion in this feature as it is an extreme thrash metal record from a band that began as a metalpunk hybrid influenced by the very origins of extreme metal, call it death/thrash if you will… I think it fits! If you’re looking for the best possible version of ‘Strappado’ look no further than any version High Roller Records is carrying. 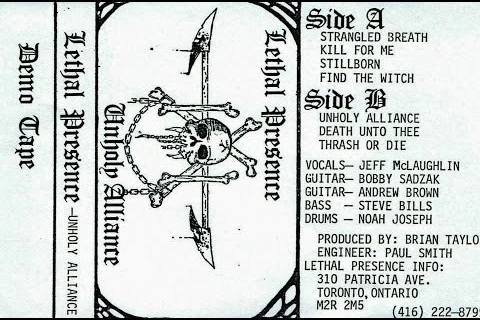 Around the same time Slaughter released ‘Strappado’ fellow Toronto band Lethal Presence would release their debut demo ‘Unholy Alliance’ to fairly decent zine buzz at the time. It was notable for nods to Slayer and some technical thrash metal ambitions (some of which are muffled by the awful tape rip I’ve linked) but when Slaughter needed a second guitarist they easily poached Bobby Sadzak from Lethal Presence. His capabilities alongside a new drummer (Brian Lourie) meant Slaughter would begin to sound the way they’d probably intended from the start, like a brutal thrash metal band. 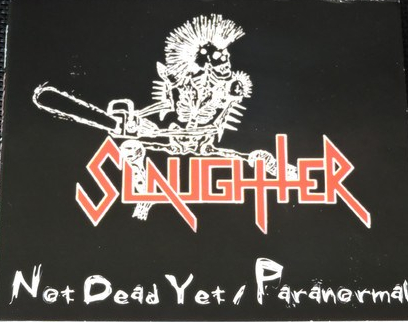 New drummer, two guitarists, harmonized guitar leads, faster pace, cleaner production and well… ‘Paranormal’ was a demo meant to be the second full-length from Slaughter. It is a worthy follow-up to ‘Strappado’ for its increased technical approach and greater speed throughout. For a 28 minute full-length ‘Paranormal’ is packed with riffs and generally strong songwriting, something akin to Sepultura‘s ‘Schizophrenia’. Guarantee even some of the most devout fans of the band haven’t spent serious time with this demo and I think that is a damned shame because it really deserves as much attention as ‘Strappado’ on some level. The only major issue I understand coming from fans of their original sound is that the punkish buzzsaw rage of it all has now given way to fairly standard Canadian thrash fare though it is particularly heavy. It was the thing that could not be, though, as longtime bassist Terry Sadler would leave the band after the recording and the band would shelve it, eventually changing their name to Strappado. A few of these songs would be used for the debut full-length from that new version of the band. 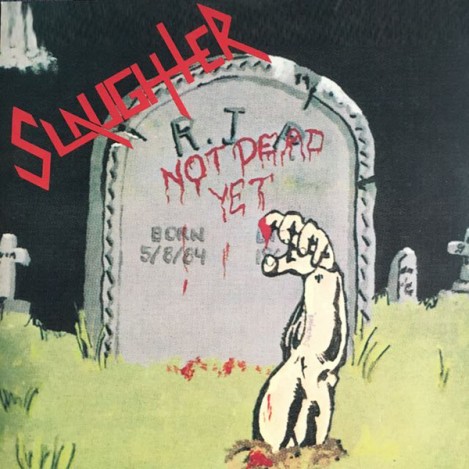 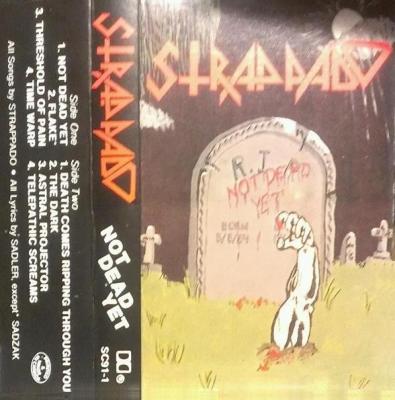 No, you shouldn’t consider Strappado‘s debut full-length canon in the Slaughter discography but there is no way to avoid it. This was Dave Hewson‘s take on classic thrash metal of the more brutal vein and it’d end up somewhere near early Blood Feast (or Rigor Mortis). Just as you wouldn’t consider Killjoy, Necrophagia and Cabal the same band you shouldn’t lump ‘Not Dead Yet’ in with their discography but look, everyone does and even the fuckin’ cover art and logo make it clear that this is still Slaughter in spirit. At the time it sure seemed like Hewson was finally going to make a death metal record but instead we have an often overlooked classic thrasher that deserves to be appreciated outside of the Slaughter legacy. You might then find it ironic that I’ve included it here but that’d be because it was released multiple times under the original band name since and is considered a Slaughter album today. It rips! And in some ways it sounds more like ’87 Slaughter than ‘Paranormal’ did.

There are a bunch of career spanning compilations, demo box sets, and remasters out there readily available to swipe up and no self-respecting thrash or death/thrash metal fan should go without at least one copy of ‘Strappado’ in their collection. Slaughter remain one of my favorite discoveries even two decades removed from my purchase of that Nuclear Blast remaster of ‘Strappado’ and it has been ecstasy to return to their discography for this feature and revive that part of my brain that is still heavily influenced by Slaughter. If nothing else I hope to inspire folks to spend more time with ‘Paranormal’ and/or ‘Not Dead Yet’ particularly if you are a classic/brutal thrash fan.